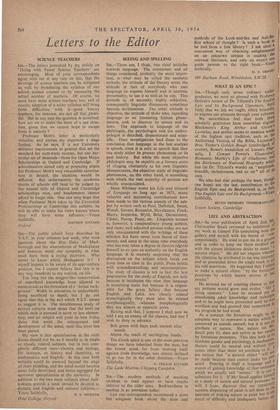 SIR,—There are, I think, two chief attitudes towards language. The commoner, and all things considered, probably the more impor- tant, is what may be called the aesthetic attitude, the attitude of the literary artist, the attitude in fact of everybody who uses language to express himself and is anxious, presumably, to use it as well as he can. This attitude is, of necessity, highly subjective, consequently linguistic discussions sometimes become acrimonious. The other attitude is objective, the attitude of those who, regarding language as an interesting human pheno- menon, seek to discover its nature and its laws. The approach to language of the philologist, the psychologist and the anthro- pologist is detached, dispassionate and scien- tific. Their investigations lead them to the conclusion that language in the last analysis is speech, since it is only as speech that they can study either its present phenomena or its past history. But while the most objective philologist may be capable as a literary artist of clinging obstinately to his own linguistic idiosyncrasies, the objective study of linguistic phenomena, on the other hand, is something with which the vast majority of persons are wholly unacquainted.

Since Whitney wrote his Life and Growth of Language as long ago as 1875, many valuable and interesting contributions have been made to the various aspects of the sub- ject by writers such as Paul, Delbrilek, Sweet, Wundt, Sievers, Rousselot, Hovelacque, Finck, Marty, Jespersen, Wyld, Brdal, Darmesteter, CIddat, Nyrop, Passy, etc. Linguistic science is, however, a comparatively young subject, and many well educated persons today are not only unacquainted with the writings of these scholars but have never even heard of their names; and since at the same time everybody who has ever taken a degree in classics retards himself as co ipso an authority on the English language, it is scarcely surprising that the discussions on the subject which break out from time to time in the public Press bristle with misunderstandings and misconceptions. The study of classics is not in fact the best preparation for the study of English, not only because it inculcates the view that language is something static but because it is respon- sible for the gross fallacy that because English and Latin are closely related etymologically they must also he related morphologically, . whereas morphologically they are almost at opposite poles.