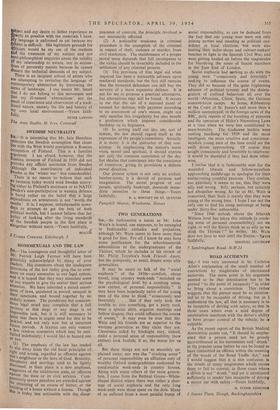 Page 13, 30 April 1954 — 1 Mr. Patrick Leigh Fermor will have been gratefully acknowledged by
Close

1 Mr. Patrick Leigh Fermor will have been gratefully acknowledged by

many of your eaders. His comments about the inadequate provisions of the law today give rise to corn- ;tient on many anomalies in our legal system, and it is hoped that they may stimulate some Or our experts to give the matter'their serious attention. We have inherited a mixed assort- tnent of laws, unrelated in period, unequal in their sanctions, and bound together by no orderly system. The ponderous but conscien- tious legal mind may complain that a full revision at this stage or any stage is an Impossible task, but it is still necessary to :sist that there is urgent need for this to be ckled, and not only now but at recurrent uture periods. A layman can only venture i few random comments which may be mul- tiplied indefinitely; I would like to hazard one Or two.

(1) The emphasis of the law has tended to slip away from the old basic principles of right and wrong, regarded as offences against blasphemy neighbour or the laws of God. Brutality, °_.,'asphemy and sacrilege tend to be lightly dismissed; in their place is a new emphasis, Suggestive of the totalitarian state, on offences against the state or its civil services. Com- paratively severe penalties are awarded against .the obtaining of an excess of butter, or the

pearance of controls, the principle involved is not necessarily affected.

(2) A noticeable weakness in criminal procedure is the exemption of the criminal in respect of theft, violence or murder, from civil restitution, The maintenance of a proper moral sense demands that full recompense to the victim should be invariably included in the settlement of any criminal process.

(3) The provision of free legal aid when required has been a noticeable advance upon mediaeval standards; but the fact still remains that the moneyed defendant can still buy the services of a more expensive defence. It is not for me to propose a practical alternative, but alternatives may still be found. It occurs to me that the use of a national panel of counsel for defence, with payment according to an assessment of one's means, might not only equalise this irregularity but also benefit a profession which imposes considerable hardship on its beginners.

(4) In sorting itself out into any sort of system, the lavi should regard itself as the expression of the people's conscience. Actually it is more: it is the instructor of that con- science. In emphasising the nation's worst vices, moral and spiritual, it should express not only the common conscience of the day but idealise that conscience into the, conscience of tomorrow, giving its provisions a definite moral direction.

Our present system is not only an archaic lumber-room; it is devoid of purpose and imagination. The moral progress of our people, spiritually bankrupt, demands imme- diate attention to these things.—Yours