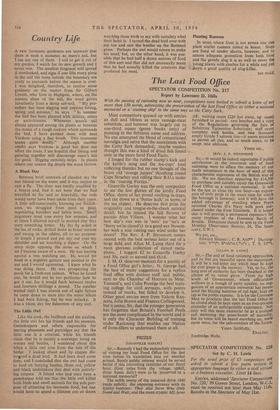 SPECTATOR COMPETITION No. 217 Report by Lawrence D. Hills With the passing of rationing now so near, competitors were invited to submit a letter of not more than 150 words, advocating the preservation of the last Food Office as either a national memorial or a' training ship' M the same way as the Catty Sark.

Most competitors queued up with entries as dull and lifeless as soya sausage-meat substitute, and humour was largely cut to one-third ounce (green books only) of punning in the fictitious name and address. No one attempted the blend of romanticised nostalgia and satire that the association with the Cutty Sark demanded; maybe readers thought this was a kind of dried fish found only in the more lurid Food Facts.

I longed for the rubber stamp's kick and the kettle's song and the tea-cups loud volleying thunder but no one thought of the brave old 'orange juicers' threshing round Cape Strachey and rolling their B.U.s under in the 'roaring Forties.'

Granville Garley was the only competitor to see the lost glories of the lordly Food Office, shorn alter proud swelling in-trays, and cut down to a 'butter hulk' in terms of the tea clipper. He deserves first prize for originality and tongue-in-the-cheek satirical detail, but he missed the full flavour of pseudo Alan Villiers. I wonder what her best day's run was in `nots' (or `no's or `Sorry we're closed's) in a good wet Novem- ber with a nice cutting east wind under her doors? The Rev. J. P. Stevenson comes second with the best serious letter out of a large field, and Allan M. Laing third for a most glorious collection of mixed meta- phors. 1 suggest £2 to Granville Garley and 30s. each to second and third.

J. M. 0. deserves mention for a parody of a Food Office girl's letter; N. George had the best of many suggestions for a replica food office with dummy staff and public, next to the Chamber of Horrors in Mme. Tussaud's, and Colin Prestige the best train- ing college for civil servants, with points instead of marks, but failed to develop it. Other good entries were from Valerie Ran- zetta, John Brown arid Frances Collingwood, but it seems, Sir, that the younger generation has forgotten that Britain's Football Pools arc the most complicated in the world and it is only the Character Building of training under Rationing that enables our Nation of form-fillers to understand them at all.

AD; waiting room (220 feet away, up steps) furnished in period: two benches and a copY of the Regulations governing the Sale of Substitute Turpentine Substitute; staff room complete with kettles, and two thousand empty Grade 3 salmon tins—it seems pointless to permit all this, and so much more, to be swept .into oblivion.

Sir,—It would be indeed regrettable if publio satisfaction at the imminent end of food rationing were to efface the memory of our ready acceptance in the hour of need of this characteristic expression of the British way of life. We are therefore appealing for £14,500 to purchase and suitably equip the Greenwich Food Office as a national memorial. It will be the last to close (by one hour—an expres- sion of civic pride in the mean time for which the borough is famous); and it will have the added advantage of standing where PepYs rationed Charles 11's Navy with pork pur- chased under the First Elizabeth. It is hoped that it will provide a permanent repository for many trophies of the Domestic Battle of Britain. Donations should be sent to the Food Monday Observance Society, 24, The Sanc- tuary, S. W.1.