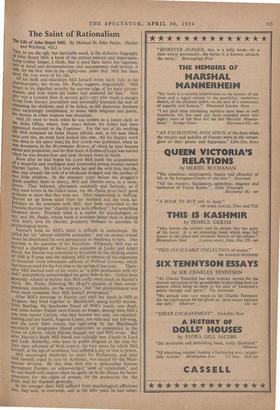 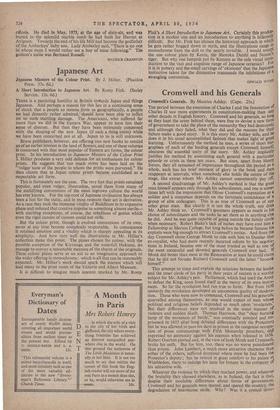 The Saint of Rationalism

Tnis, to use the ugly but inevitable word, is the definitive biography of John Stuart Mill, a book of the utmost interest and importance. 1' mg(rather longer, I think, that it need have been) but vigorous, rich in detail and documentation, and uncommonly well written, it tells for the first time in the eighty-one years that Mill has been dead, the true story of his life.

Of his birth and education Mill himself wrote fairly fully in his Autobiography, but wrote, Mr. Packe suggests, ungratefully: "Mill forgot in his dignified security the narrow edge of his early circum- stances, and how much his father had achieved for him." Mill Pere was a London Scot (a servant girl's son) who made a meagre living from literary journalism and personally assumed the task of educating his children; and if he failed, as his illustrious firstborn once surprisingly complained, to make them religious and poetic, his success in other respects was abundant.

Mill his went to work when he was sixteen as a junior clerk in the India Office, where, four years before, his father had been aPpointed Assistant to the Examiner. For the rest of his working life Mill remained an India House official, and, in his neat black suits and ties, he must have looked like one. All his literary work was done in his spare time; his first article was published, when he Was seventeen, in the Westminster Review, of which he later became editor and proprietor, and his first book A System of Logic was started when he was twenty-four and took thirteen years to finish. cOlosis. He died In May, 1873, at the age of sixty-six, and was buried in the splendid marble tomb he had built for Harriet at Avignon. Towards the end of his life Mill had become the godfather of the Amberleys' baby son. Lady Amberley said, "There is no one in whose steps I would rather see a boy of mine following." The godson's name was Bertrand Russell.