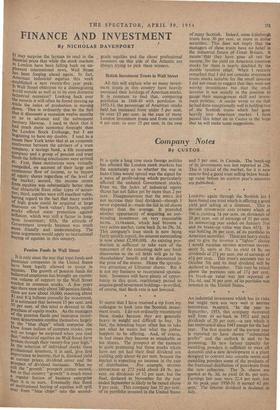 By NICHOLAS DAVENPORT IT may surprise the layman to read in the financial press that while the stock markets M London have been falling back on un- Pleasant international news, Wall Street has been forging ahead again. In fact, American industrial equities this week established a new twenty-five year peak. Is Wall Street oblivious to a disintegrating World outside as well as to its own domestic industrial recession? Looking back over the records it will often be found moving up while the index of production is moving down. This is ordinarily due to the fact that it discounts a recession twelve months or so in advance and the subsequent recovery likewise. I used to think that it had much more economic foresight than the London Stock Exchange, but I am beginning to have my doubts. I read in a recent New York letter that at an economic conference between the advisers of a trust company, a savings bank, a life insurance company and a group of pension and trust funds the following conclusions were arrived at. First, these institutions were virtually compelled, on account of their large and continuous flow of income, to be buyers of equity shares regardless of the level of the market; second, the income return from equities was substantially better than that obtainable from other types of securi- ties; third, equities were still excellent value, having regard to the fact that many stocks of high grade could be acquired at large discounts on 'book values'; fourth, equity stocU offered some protection against inflation, which was still a factor in long- term investment; fifth, the attitude of Government towards business was much more friendly and understanding. The same arguments would apply to institutional buying of equities in this country.

grade equities and the clever professional investors on this side of the Atlantic are always trying to pick these winners.