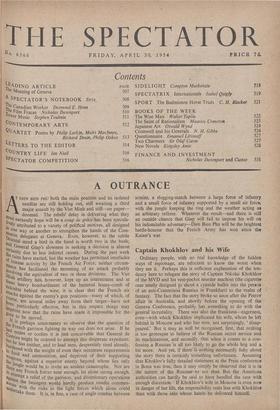 T DIEN BIEN PHU both the main position and its isolated satellite are still holding out, still awaiting a third major assault by the Viet Minh and still—on paper— doomed. The rebels' delay in delivering what they llst earnestly hope will be a coup de grace has been specula- relY attributed to a variety of political motives, all designed one way or another to strengthen the hands of the Com- ti)11111ist delegates at Geneva. Even, however, to the subtle Ithr,iental mind a bird in the hand is worth two in the bush; e'" General Giap's slowness in seeking a decision is almost thertainlY due to less indirect causes. During the past week Ofe;ranis have started, but the weather has permitted interludes ditense activity by the French Air Force; neither circum- stance has facilitated the mounting of an attack probably ktv_,°1ving the equivalent of two or three divisions. The Viet artillery has, however, kept up an intermittent and at Ames heavy bombardment of the battered honey-comb of attacks behind the wire; it is clear that the French air co'cKs against the enemy's gun positions—many of which, of Nurse. are several miles away from their target—have not knell Particularly effective, but in this respect things may P• rnve now that the rains have made it impossible for the ▪ to be moved. then Is perhaps unnecessary to observe that the question of 111;irrench garrison fighting its way out does not arise. If he e,su mules or coolies it is just conceivable that General de btaitries Ii might be ordered to attempt this desperate expedient; has neither, and to lead men, desperately tired already, bUrcre ened with the weight of even their minimum requirements hea°°d and ammunition, and deprived of their supporting the P'as, against a superior enemy beyond whom lies only theriungle would be to invite an aimless'catastrophe. Nor are to aet+anY French forces near enough, let alone strong enough, agai `emPt a relief of the garrison; and diversionary operations curate the the besiegers would hardly produce results commen- um_Le with the risks to the light forces which alone could armies, a slogging-match between a large force of infantry and a small force of infantry supported by a small air force, with the jungle keeping the ring and the weather acting as an arbitrary referee. Whatever the result—and there is still an outside chance that Giap will fail to impose his will on his indomitable adversary—Dien Bien Phu will be the brightest battle-honour that the French Army has won since the Kaiser's war.