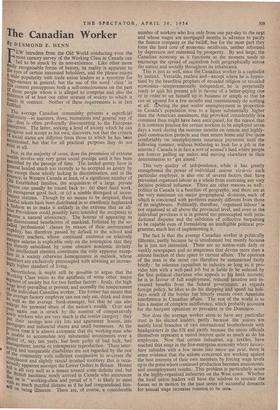 from the Old World conducting even the most cursory survey of the Working Class in Canada can fail to be struck by its non-existence. Like other more astlY recognisable forms of beauty, its reality is apparent to e eyes of certain interested beholders, and the phrase enjoys Wide popularity with trade union leaders as a synonym for 1.114e-earners in general; but the use of the word ' class ' in . context presupposes both a self-consciousness on the part 4 those people whom it is alleged to comprise and also the xistence of at least one other stratum of society to which it ,tands in contrast. Neither of these requirements is in fact [lifted.

The average Canadian community presents a superficial '!unormity—in manners, dress, recreations and general way of " . e----that is often profoundly disconcerting to the European grant. The latter, seeking a level of society which he can ognise and accept as his own, discovers, not that the criteria social status are different from those to which he has been stomed, but that for all practical purposes they do not ist at all.

Nor, in the majority of cases, does the possession of extreme ealth involve any very great social prestige until it has been , notified by the passage of time. The landed gentry have in neral landed much too recently to be accepted as gentry by Y except those wholly lacking in discrimination, and in the isence, in Western Canada at least, of a significant number of 41 Established families, the acquisition of a large private tune can usually be traced back to : (a) sheer hard work, ) outrageous good luck, or (c) a nimble disregard of incon- onient statutes. Though by no means to be despised, these itful talents have been distributed in so manifestly haphazard fashion as to make it unlikely in the extreme that an all Ise Providence could possibly have intended the recipients to eine a natural aristocracy. The honour of appearing as disinterested benefactors of mankind, forfeited by the so- tu ed, 'professional ' classes ' by reason of their .unrestrained{, PIrlitY, has therefore passed by default to the school and University teachers, whose continued existence on relatively uleagre salaries is explicable only on the assumption that they re directly subsidised by some obscure academic divinity. his intellectual element constitutes the only apparent excep- ea in a society otherwise homogeneous in outlook, whose ffenthers are exclusively preoccupied with attaining an increas- wglY higher standard of living. ‘,,Nevertheless, it might still be possible to argue that the i;orking Class exists as the antithesis of some other major Wage of society but for two further factors : firstly, the high of level prevailing at present, and secondly the temperament li'i-v tne individual Canadian worker. The former has meant that ,° average factory employee can not only eat, drink and dress c„', well as the average bank-manager, but that he can also large his personal share of the nation's wealth. Over and rer, again one is struck by' the number of comparatively p:,WIY workers who are very much in the rentier category : they tiut their savings into city lots and apartment houses, into ilortgages and industrial shares and small businesses. At the resent time it is almost axiomatic that the working-man who unable to accumulate any substantial investments over a Period of, say, ten years, has been guilty of bad luck, bad acangement, inertia or intemperate reproduction. These inter- " ing and inseparable disabilities are not regarded by the rest Of the _ community with sufficient compassion to re-create the elromplacent and slightly rancid inverted snobbery that is occa- toanallY apparent amongst the Lower Orders in Britain. Honest it,_" is all very well as a means toward some definite end, but irre13ritish mechanic newly arrived in Canada who announces

'I he is , ' working-class and proud of it " is likely to meet With laic s much puzzled distaste as if he had congratulated him- °n being illiterate. There are, of course, a considerable number of workers who live only from one pay-day to the nest and whose wages are mortgaged- months in advance to pacify the finance company or the bailiff; but for the most part they form the hard core of economic recidivists, neither reformed by depression nor redeemed by prosperity. By and large, the Canadian economy as it functions at the moment tends to 'encourage the spread of capitalism both geographically across the nation and socially throughout its inhabitants.

This is just as well, since the Canadian worker is a capitalist by instinct. Versatile, restless and—except where he is hypno- tised by the beardless prophets of revealed religion or revealed economics—temperamentally independent, he is perpetually ready to quit his present job in favour of a better-paying one or in 'order to set himself up in business or simply so that he can sit qound for a few months and ostentatiously do nothing at all. (During the past winter unemployment in proportion to Canada's population rose to a figure substantially higher than the American maximum; this provoked considerably less comment than might have been anticipated, for the reason that it is common practice for certain workers to be employed seven days a week during the summer months on remote and highly- paid construction projects and then return home and live quite comfortably on unemployment insurance payments until the following summer, without bothering to look for a job in the interim.) Canada is in fact a sort of nomad's land where people are forever pulling up stakes and moving elsewhere in their determination to ' get ahead.'

This very quality of independence, while it has greatly strengthened the power of individual unions vis-a-vis each. particular employer, is also one of several factors that have prevented organised labour as a whole from exercising any very decisive political influence. There are other reasons as well: politics in Canada is a function of geography, and there are at the very minimum six major geographical divisions, each of which is concerned with problems entirely different from those of its neighbours. Politically, therefore, `organised labour' is not organised at all above the provincial level, and even in the individual provinces it is in general too preoccupied with juris- dictional disputes and the subtleties of collective bargaining to be capable even of formulating an intelligible political pro- gramme, much less of implementing it.

The fact is that the average Canadian worker is politically illiterate, partly because he is uninformed but mainly because he is just not interested. There are no nation-wide daily or weekly newspapers and no magazines that devote more than a ,minute fraction of their space to current affairs. The opinions of the man in the street can therefore be summarised fairly briefly : he tolerates capitalism in industry so long as it pro- vides him with a well-paid job but is liable to be seduced by the first political charlatan who appeals to his bank account; he is in favour of full employment, reduced taxation and in- creased benefits from the federal government; as regards foreign policy, he likes to do his shopping and spend his holi- days south of the border but bitterly resents overt American interference in Canadian affairs. The rest of the world is to him a matter of complete indifference, which probably accounts for the buoyant optimism so prevalent in the Dominion.

Nor does the average worker seem to have any particular trust in his elected leaders, partly because the unions are mainly local branches of vast international brotherhoods with headquarters in the, US and partly because the union officials themselves represent a vested interest quite as much as do his employers. Now that certain industries, e.g. textiles, have reached that stage in the free-enterprise economy where laissez- faire subsides with a low moan into sauve qui peut, there is some evidence that the unions concerned are working against the best interests of their own members by forcing wage levels up to the point where continued production becomes uneconomic and unemployment results. This problem is particularly acute in the highly-organised industries on the West coast. Whether the local union leaders will have the wisdom to restrain the forces set in motion by the past series of successful demands for annual wage increases remains to be seep.