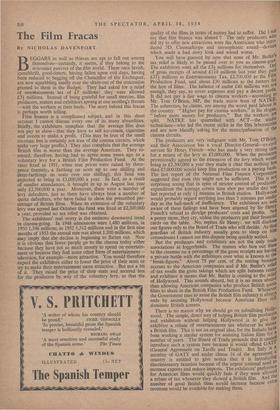 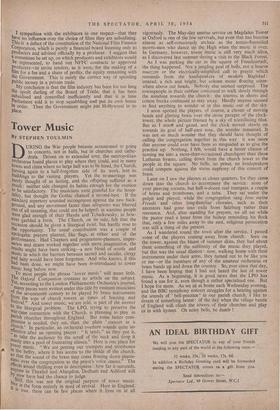 By NICHOLAS DAVENPORT BEGGARS as well as thieves are apt to fall out among themselves—certainly, it seems, if they belong to the nouveaux pauvres of the film world. These once lavish, spendthrift, good-timers, having fallen upon evil days, having been reduced to begging off the Chancellor of the Exchequer, are now squabbling madly over the share-out of the concession granted to them in the Budget. They had asked for a relief of entertainments tax of £7 millions: they were allowed £31 millions. Instead of being grateful for small mercies, film producers, renters and exhibitors sprang at one anothe‘'s throats —with the workers at their heels. The story behind this fracas is perhaps worth telling.

Film finance is a complicated subject, and in this short account I cannot discuss every one of its many absurdities. Briefly, the exhibitors complain that the average film does not pay to show—that they have to sell ice-cream, cigarettes and sweets to make a profit. (This may be true of the small cinemas, but is certainly not true of the cinema circuits, which make very large profits.) They also complain that the average British film is worse than the average American. They re- sented, therefore, having had to agree some years ago to a voluntary levy for a British Film Production Fund. At the rates fixed in 1951, when seat prices were raised by three- pence (namely., a farthing on seats up to one shilling and three-farthings on seats over one shilling), this fund was expected to bring in £3,000,000 a year. In fact, as a result of smaller attendances, it brought in up to August last year only £2,700,000 a year. Moreover, there were a number of levy defaulters, just as there have always been a number of quota defaulters, who have failed to show the prescribed per- centage of British films. When an extension of the voluntary levy was agreed last October the fund was fixed at £2,300,000 a year, provided no tax relief was obtained.

The exhibitors' real worry is the ominous downward trend in cinema-going. In 1948 admissions were 1,480 millions, in 1950 1,396 millions, in 1952 1,312 millions and in the first nine months of 1953 the annual rate was about 1,300 millions, which may imply that the decline is beginning to flatten out. Now it is obvious that fewer people go to the cinema today either because they have not so much money to spend on entertain- ment or because they find some other form of entertainment— television, for example—more attractive. You would therefore expect the exhibitors either to lower the price of their seats or try to make their entertainment more attractive. But not a bit of it. They raised the price of their seats and secured less for the producers by way of the voluntary levy, so that the quality of the films in terms of money had to suffer. Did I not say that film finance was absurd ? The only producers who did try to offer new attractions were the Americans who intro' duced 3D, CinemaScope and stereophonic sound—devices which made a bad story look and sound worse. You will have guessed by now that none of Mr. Butler's tax relief is likely to be passed over to you as cinema-goer. The exhibitors want all the £31 millions for themselves. Out t of gross receipts of around £110 millions last year they paid £37/ millions in Entertainments Tax, £2,700,000 to the Film Production Fund, and about £30. millions to the renters for the hire of films. The balance of under £40 millions was not enough, they say, to cover expenses and pay a decent prout. It did not pay a fair wage to cinema workers—according to Mr. Tom O'Brien, MP, the trade union boss of NATO. The usherettes, he claims, are among the worst paid labour In the country. " Higher pay for cinema workers," is his slogan. " before more money for producers." But the workers are split. NATKE has quarrelled with ACT—the studio technicians—who led the recent strike in the film laboratories and are now blandly asking for the municipalisation of the cinema circuits.

The producers are very indignant with Mr. Toni O'Brien, and their Association has a vocal Director-General—ex-civu servant Sir Henry French—who has made a very strong case for a return of the levy to £3,000,000. When the producerS provisionally agreed to the extension of the levy which would bring in £2,300,000 a year they made it clear that nothing less than £3,000,000 would keep film production on a paying basis. The last report of the National Film Finance Corporation suggested that even this might not be sufficient. This is not surprising seeing that in spite of stricter control of producers expenditure the average screen time shot per studio day was last reported at only 1 minutes in British studios. Hollywood would probably regard anything less than 3 minutes per studf,,o day as the hall-mark of inefficiency. The exhibitors are wen aware of these failings and have been angered by Sir Herd French's refusal to divulge producers' costs and profits. Not a penny more, they cry, unless the producers put their financial cards on the table. No, replies Sir Henry: we will disclose. our figures only to the Board of Trade who will decide. As that guardian of British industry usually goes to sleep on On conundrums I cannot see this dispute being quickly settled. I sympathise with the exhibitors in one respect—that they have no influence over the choice of films they are subsidising. This is a defect of the constitution of the National Film Finance Corporation, which is purely a financial board listening only to produciers and advised officially by a producer. I suggest that a committee be set up, on which producers and exhibitors would be represented, to hand out NFFC contracts to approved producers—to invite tenders, as it were, for the making of a film for a fee and a share of profits, the equity remaining with the Government. This is surely the correct way of spending Public money in a private trade. My conclusion is that the film industry has been for too long the spoilt darling of the Board of Trade, that it has been subsidised and controlled inefficiently and that it is time Parliament told it to stop squabbling and put its own house in order. Then the Government might put Hollywood in its Place.