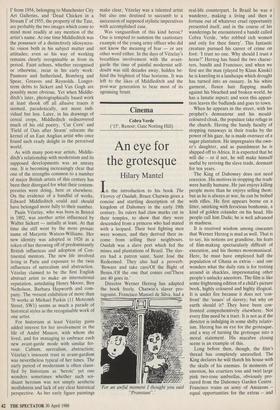 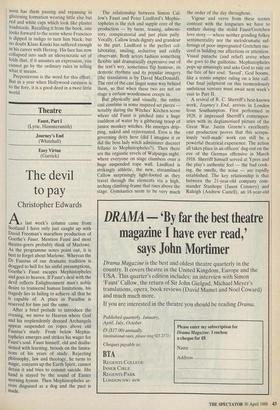 An eye for the grotesque

In the introduction to his book The Viceroy of Ouidah, Bruce Chatwin gives a concise and startling description of the kingdom of Dahomey in the early 19th century. Its rulers had claw marks cut in their temples, to show that they were descended from a princess who had mated with a leopard. Their best fighting men were women, and they derived their in- come from selling their neighbours. Ouidah was a slave port which fed the mines and plantations of Brazil. The slav- ers had a patron saint, Saint Jose the Redeemed. They also had a proverb: 'Beware and take care/Of the Bight of Benin./Of the one that comes out/There are 40 goes in.'

Director Werner Herzog has adapted the book freely. Chatwin's slaver pro- tagonist, Francisco Manoel de Silva, had a 'For an awful moment I thought you said "Protestant".' real-life counterpart. In Brazil he was a wanderer, making a living and then a fortune out of whatever cruel opportunity presented itself, and in the course of his wanderings he encountered a bandit called Cobra Verde, 'who robbed rich women and only for their finery'. This fantastic creature pursued his career of crime on foot: 'I trust no one. Why should I trust a horse?' Herzog has fused the two charac- ters, bandit and Francisco; and when we first see the man (played by Klaus Kinski) he is kneeling in a landscape which drought has turned into an ossuary. In his white garment, flaxen hair flapping madly against his bleached and broken world, he has a lunatic aspect; and soon this appari- tion leaves the badlands and goes to town.

When he appears in the street, with his prophet's demeanour and his mould- coloured cloak, the populace take refuge in the church. Having the handy faculty of stopping runaways in their tracks by the power of his gaze, he is made overseer of a sugar plantation. He impregnates the own- er's daughter, and as punishment he is shipped off to Africa. It is expected that he will die – or if not, he will make himself useful by reviving the slave trade, dormant for ten years.

The King of Dahomey does not need coercion. His motives in stopping the trade were hardly humane. He just enjoys killing people more than he enjoys selling them; but as he is always at war, he can be bribed with rifles. He first appears borne on a litter, smirking with ferocious bonhomie, a kind of golden colander on his head. His people call him Dada; he is well advanced in madness.

It is received wisdom among cineastes that Werner Herzog is mad as well. That is to say, his notions are grandiose, his feats of film-making spectacularly difficult of execution, and his themes monomaniacal. Here, he must have employed half the population of Ghana as extras – and one wonders what the daily rate is for trotting around in shackles, impersonating other people's unlucky ancestors. The film is like some frightening edition of a child's picture book, highly coloured and highly illogical. It is under fire because it does not 'con- front' the 'issues' of slavery; but why on earth should it? They have been con- fronted comprehensively elsewhere. Not every film need be a tract. It is not as if the director is indulging in some shifty relativ- ism. Herzog has an eye for the grotesque, and a way of turning the grotesque into a moral statement. His macabre closing scene is an example of this.

Long before then, though, the film's thread has completely unravelled. The King declares he will thatch his house with the skulls of his enemies. In moments of emotion, his courtiers toss and twirl large pink two-tone umbrellas, obviously pro- cured from the Dahomey Garden Centre. Francisco trains an army of Amazons – equal opportunities for the extras – and soon has them passing and repassing in glistening formation wearing little else but red and white caps which look like plaster toadstools. Recalling it from the book, one looks forward to the scene where Francisco is dipped in indigo to turn him black; but no doubt Klaus Kinski has suffered enough in his career with Herzog. His face has now collapsed into such an idiosyncratic set of folds that, if it assumes an expression, you cannot go by the ordinary rules in telling what it means.

Preposterous is the word for this effort. But in a year when Hollywood cuteness is to the fore, it is a good deed in a twee little world.