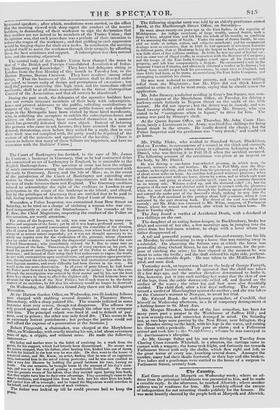 The Court of Bankruptcy has decided, in the case of

Mr. James Le Couteur, a bankrupt in Guernsey, that as he had contracted debts and committed an act of bankruptcy in England, he is amenable to the English Bankrupt-laws. The question at issue has been the subject of much conversation among the merchants and others connected with the trade to Guernsey, Jersey, and the Isle of Mai; as, in the event of the jurisdiction of the Court of Bankruptcy not extending over traders in those islands, considerable impediments will be thrown in the way of trade between them and England. The Guernsey creditors refused to acknowledge the right of the creditors in London to any participation in the estate of the bankrupt in the island ; and alleged, that by the privileges of Guernsey they are entitled first to be paid in full, having registered their debts in the Royal Court of Guernsey.

Wovenden, a Police Inspector, was committed from Bow Street on Saturday, to be tried on a charge of violating a woman who was con. fined temporarily at one of the Stationhouscs. The remarks of Sir F. Roe, the Chief Magistrate, respecting the conduct of the Police on this occasion, are worth attention.

The crime of the Inspector, he said, was soon well known by many con- stables and sergeants of the force; yet by all it was kept a profound secret. It became a matter of general conversation among the constables of the division, who of course lost all respect for the Inspector, over whose head they knew a charge of so serious nature impended; yet it was not thought necessary to in- stitute any inquiry even for the vindication of the prisoner, whose character thus lay under a stain. At length the disgraceful imputation reached the ears of Lord Duncannon ; who immediately ordered Sir F. Roe to enter into an investigation of the facts. Then even, in spite of every exertion on his part, he found the greatest unwillingness on the part of the Police to afford him any assistance : and instead of their using their best endeavours to expose the truth, he met with contradiction upon contradiction, and prevarication upon prevarica- tion, throughout the whole corps. One witness had contradicted anothei in the most flagrant manner, and every difficulty had been thrown in his way. He would make one more observation. In all cases of petty felony, he had found the Police most forward in bringing the offenders to justice ; but in this case, although the investigation was ordered by their master and by his, not the least desire was shown by them to afford the slightest aid. He had hitherto been an advocate for the system of the New Police ; but if such were to be the future conduct of its members, he felt that his advocacy would no longer be deserved.

On Wednesday, the Middlesex Grand Jury threw out the bill against Wovenden.

At the Hatton Garden Office, on Wednesday, two ill-looking fellows were charged with stabbing several females in Plumtree Street, Bloomsbury, with a sharp pointed file. The wounds inflicted in some instances were very severe, though not dangerous. The offence was only proved against one of the men, though the other was in company with him. The principal culprit was fined .5/. and in default of pay- ment, sent to prison ; the other was only fined 20s. [This seems to be an extremely lenient punishment ; but perhaps the parties could not well afford the expense of a prosecution at the Sessions.] Robert Fitzgerald, a chairmaker, was charged at the Marylebone Office, on Wednesday, with cruelly treating his son, a lad about seventeen years of age, a cripple, and without arms. He made the following statement--

His father and mother were in the habit of receiving 5s. a week from the parish, for his support, which had latterly been discontinued. No sooner was the money stopped, than his father, after beating him, kicked him out of doors, to shift for himself in the best way he was able. Ile then went to the house of A married sister, and Mr. Knox, an artist, finding that he was of an ingenious turn, instructed him in the art of taking portraits ; and he was now enabled to take a very fair likeness by holding the pencil between his toes, having no !lands. On one occasion, he brought home 1/. the amount of his day's earn- logs, and was in a fair way of gaining a comfortable livelihood. No sooner were his parents aware of his talent, than they insisted upon having him back, t!Iat they might turn him to their own advantage. They accordingly came to his knees residence, and dragged him from his bed, tore his shirt from his back, aly1 carried him off in triumph ; aad he hoped the Magistrate would interfere in he behalf, and prevent a repetition of such violence.

The father was locked up till he could procure bail to keep the Peace.

The following singular story was told by an elderly gentleman named Smith, at the Marlborough Street Office, on Saturday— He went about twenty-six years ago to the East Indies, in the capacity of Midshipman. An indigo merchant, of large wealth, named Smith, took a fancy to him, adopted luta, and left him the whole of his wealth, on condition of his assuming the name of Smith. Under the name of James Smith, he car- ried on trade as indigo, cotton, and saltpetre merchant; and his commercial dealings were so extensive, that in 1+420 he had upwards of seventeen factories in different parts, that at Hiudostan being the largest in India, and his property was little short of five millions sterling. In 1820, he was accused of having tar- ried on some sort of illegal traffic, in conjuction with the Receiver of Caunpore ; and the troops of the East India Company seized upon all his flictories and property, and left him comparatively a beggar. Ile commenced a suit in the Supreme Court at Calcutta, and ultimately obtained a verdict in his favour ; hut having been unable to get back his possessions, he came over to England, and since 18:t0, had been, as he states, memorializing the East India Company, and attempting to establish his claims.

He was now reduced to extreme poverty, and sought some trifling relief from the Magistrate ; but Mr. Dyer did not think himself entitled to order it; and he went away, saying that he should renew the application. Mr. John Stracey, a solicitor residing in Gray's Inn Square, was sum- moned to appear at the Matylebone Office, on Tuesday, for driving a hackney-coach furiouly in Regent Street on the night of the 18th instant. He did not appear ; but the driver was in custody, and was fined twenty shilling and costs for allowing Mr. Stracey, who was stated to be "outrageous when in liquor," to drive for him. The money was paid by Stracey's clerk. At the Queen Square Office, on Thursday, Mr. John Coote Har- rison, lately a Lieutenant in the Army, was fined five shillings for being found drunk in the streets. He loudly denied the charge ; but the Police Inspector said the gentleman was "very drunk," and would not go home.