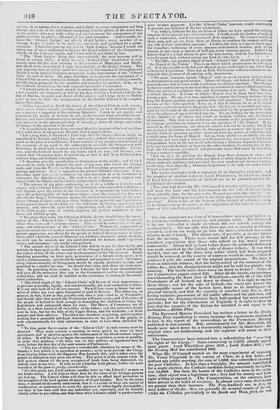 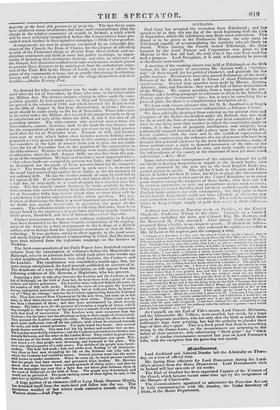 Page 6, 30 August 1834 — The late sanguinary meting of Conservatives was a total fano:
Close

The late sanguinary meting of Conservatives was a total fano:

e as Ii, numbers, intelligence, property, and genuine spirit. We illustrated it by one fart—that a single merchant did not attend, except one tnereltont tailor. 1Ve can add, that there WKS not a country gentleman attended—and we are ready to go into the facts—who had not a near relative in the Church. The dinner was, if possible, a greater failure than the meeting. There were covers laid for 3110 persons, in the confident expectation that those who talked so big would minister numerously. About half an hour before dinner the probable deficiency was made manifest by the limited sale of dinner-tickets. It was then decided, that one of the three long tables which had been prepared should be removed, as the paucity of numbers would be more evident if contrasted with the extent of the original :preparations. We have it from an authentic witness, that the burry-scurry of the removal of the tables, tke., that the disappointment might not be told too plainly, was amusing. The bustle over—how many sat down to dinner? Sonic of the Conservative papers stated 120. After all the bustle, canvassing— notwithstanding the Kent lion of Winchilsea—exactly 98 If the loyal Protestants of all Ireland sat down to dinner. It is right to expose these things ; not for the sake of Ireland—for every one knows the contemptible nature of the faction here, both as to intelligence or physical strength, and that the capacity of mischief only lies in their having exclusive possession of the public offices and the jury-box, and also having the Attorney. General their half-masked but most assured partisan; but for the information of England, it is right to show by data that the capacity of the faction for mischief is riot equal to its inclination.—Dublin Pilot.

The Reverend Marcus Beresford has written a letter to the Dublin Evening Post, repudiating in strong language the expressions attributed to him in the report of the proceedings at the Protestant Meeting published in that journal. But, unfortunately for Mr. Beresford, his words were taken down by a trustworthy reporter, in short-humid: tbe original notes are forthcoming, and the reporter will swear to their correctness.

The Conservatives have entered into a subscription for asserting the rights of the Clergy." Sums amounting to 1,607/. already appeai upon paper. Lord Winchilsea gives 500/. ; Lord Roden WO/. ; aimo the Evening Mail has contributed 100/. When Mr. O'Connell started on the mere experiment of opposing Mr. Vesey Fitzgerald in the county of Clare, in a few hours, and without any public meeting, the sum of 1,600/. was subscribed amongst the poor Catholics. In less than a fortnight, the amount contributed for a single election, the Catholic candidate being notoriously ineligible, was 14,0001. But then, the hearts of the Catholics were in the agita- tion; their object was a legitimate one ; they had the money and were right willing to expend it. The Conservatives, on the contrary, have been always in the habit of receiving. In almost every case, their wants are greater than their incomes. The Tory landlords are, in ihei, the mere holders of the fee ; they ore generally the nominal owners of the sot, whilst the Catholics, earticulgrly in the &nth an West, form the vas( majority of the bond fide possess( rs f prop Hy. The last thirty years SCOTLAND.