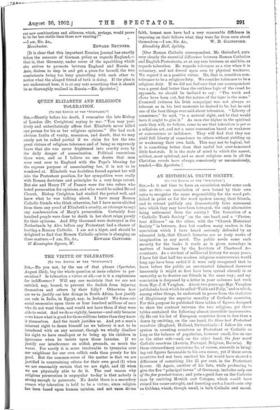 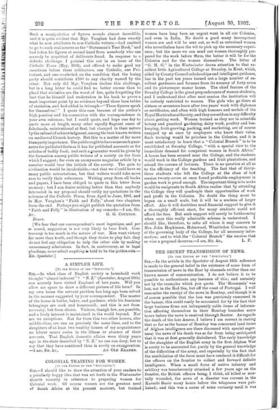 rTO THE EDITOR OF TIIR "SPECTATOR."] Sin,—Is it not time to form an association under some such title as this,—an association of men bound by their own rules to recognise the same responsibility for the word pub- lished in print as for the word spoken among their friends, and to retract publicly any demonstrably false statement into which they may have been betrayed, the only alternative being retirement from the society ? The formation of a " Catholic Truth Society " on the one hand, and a "Protes- tant Alliance " on the other, with the " Church Historical Society" in between, does but confirm many readers in the conviction which I have beard seriously defended by an educated lady, that Church histories are as truly works of imagination as any novel. The public needs some such security for the books it reads as is given nowadays in matters of business by the Institute of Chartered Ac- countants. As a student of mediaeval history for many years, I have felt that half the modern religious controversies would long ago have been ended if it were only recognised that to leave before the public an unretracted falsehood (however innocently it might at first have been spread abroad) is as unworthy as to deceive our friends in the same way ; and my conviction is deepened by a letter in your columns last week from Mgr. J. S. Vaughan. About two years ago Mgr. Vaughan published a book which be called "Faith and Folly," and in which, among other things, he undertook to prove from the statistics of illegitimacy the superior morality of Catholic countries. For this purpose he published three tables of figures designed to show the contrast between the two religions, yet these tables contained the following almost incredible inaccuracies. (1) He cut his list of European countries down to less than a dozen by omitting, on the one band, the three best Protestant countries (England, Holland, Switzerland)—I follow his own system in counting countries as Protestant or Catholic so long as the balance of population, however small, lies on one or the other side—and, on the other hand, the four worst Catholic countries (Austria, Portugal, Belgium, Bavaria). By these extraordinary omissions he, of course, succeeds in bring- ing out figures favourable to his own cause; yet if these seven countries bad not been omitted his list would have showed a difference of something like 25 per cent. in the Protestant favour. (2) Again, another of his lists, while professing to give the five "principal towns" of Germany, includes only one of the free greatest towns ; and puts a good face on the Catholic case by omitting Munich and Cologne, which would have ruined the cause outright, and inserting such a fourth-rate city as ColAenz, which, though small, is both Catholic and moraL

Such a manipulation of figures sounds almost incredible, and it is quite evident that Mgr. Vaughan had done exactly what he now attributes to non-Catholic writers,—had omitted to go to such real sources as the " Statesman's Year Book," and had taken his figures at second hand from somebody who can scarcely be acquitted of deliberate fraud. In response to a

definite challenge. I pointed this out in an issue of the Catholic Times (May, 1901), and offered to make good my

assertions before three arbitrators, one Catholic, one Pro- testant, and one co-elected, on the condition that the losing party should contribute £100 to any charity named by the other. Not only did Mgr. Vaughan decline this challenge, but in a long letter he could find no better excuse than to plead that statistics are the worst of lies, quite forgetting the

fact that he himself had undertaken in his book to prove a most important point by no evidence beyond three bare tables of statistics, and had added in triumph—" These figures speak for themselves! " I quote this case because of the author's high position and his connection with the correspondence in your own columns ; but I could quote, and hope one day to quote more at length, many other equally flagrant cases of falsehoods, unintentional at first, but changed in their nature by the refusal of acknowledgment, among the best-known writers on mediaeval Church history. But this is a matter of far more than party importance. The public ought to have some such guar- antee for published facts as it has for published accounts or for articles of bodily food; and such a guarantee would be given by the formation among public writers of a society on the lines which I suggest; for even an anonymous magazine article by a member would bear the initials of the society. The gain to civilisation would be incalculable,—not that we sizould have so many public retractations, but that writers would take more care to verify their references. Writing away from all books and papers, I have been obliged to quote in this letter from memory ; but I can desire nothing better than that anybody interested in my proposal should verify my quotations in the columns of the Catholic Times, from April to June, 1901, and in Mgr. Vaughan's "Faith and Folly," about two chapters from the end. Perhaps you might publish the quotation from "Faith and Folly" in illustration of my remarks.—I am, Sir, [We fear that our correspondent's most ingenigus, and per se sound, suggestion is not very likely to bear fruit. Con- troversy is too much in the nature of war. Men want victory far more than truth, and though they desire to play fair, they do not feel any obligation to help the other side by making unnecessary admissions. In fact, in controversy, as in legal pleadings, never admit anything is held to be the golden rule.— ED. ,S'pectator.]