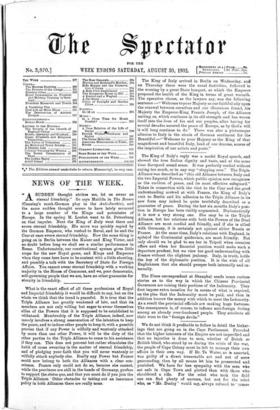 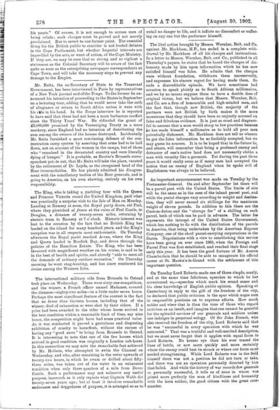 We do not think it profitable to follow in detail

the bicker- ings that are going on in the Cape Parliament. Provided that the higher interests of the Empire are not imperilled and that no injustice is done to men, whether of Dutch or British blood, who stood by us during the crisis of the war, the people of Cape Colony must be left to manage their own affairs in their own way. If Dr. Te Water, as is asserted, was guilty of a direct treasonable act and not of mere gasconading, then by all means let him be prosecuted and punished. We have far less sympathy with the men who sat safe in Cape Town and plotted than with those who shouldered a rifle. For the rebel who took the field one can find plenty of excuses, but not for the rebel who, as " Mr. Dooley " would say, always refused to " crease his pants." Of course, it is not enough to accuse men of being rebels ; such charges must be proved and not merely proclaimed. But to revert to our former point. The essential thing for the British public to consider is not heated debates in the Cape Parliament, but whether Imperial interests are imperilled by the acts, or want of action, of the Cape Ministry. If they are, we may be sure that so strong and so vigilant a statesman as the Colonial Secretary will be aware of the fact quite as soon as the enterprising newspaper correspondents at Cape Town, and will take the necessary steps to prevent any damage to the Empire.