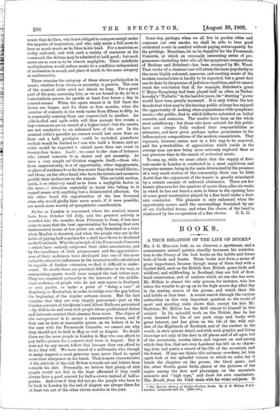 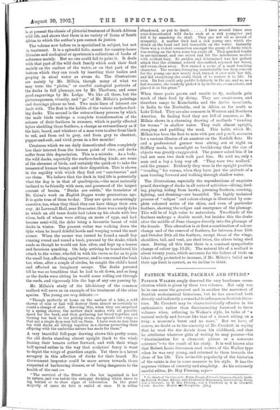 A TRUE RELATION OF THE LIFE OF DUCKS.*

Mn. J. G. lima's, both as an observer, a sportsman, and a consummate animal painter, steadily increases his contribu- tion to the library of the best books on the habits and forms both of birds and beasts. These books now form a aeries of great importance, because though many of them deal with a limited field, such as the British deer, British game-birds and wildfowl, and wildfowling in Scotland, they are full of first- hand observation, and of matters which no one else has seen. Mr. Millais is almost the only person, for instance, who has taken the trouble to go up on to the high moors day after day in the nesting season of the grouse, and watch their life and habits at that time. A recent search through the various authorities on this very important question to the world of sport and sporting rents shows that, except the late Mr. Seebohm, Mr. Millais has the field almost to himself in this subject. In his splendid work on the British deer he has even invested the life of our park stags and bucks with great interest, and has given us the life of the wild red- deer of the Highlands of Scotland, and of the roedeer in the woods, in such minute detail, and with such graphic and living drawings not only of the deer in all places and of all ages, but of the mountains, cornea, lakes, and vapours on and among which they live, that not even Landseer has left us so charm- ing, true, and poetic a record of the life of the mountain and the forest. If any one thinks this estimate overdone, let him again look at the splendid volume to which we refer, lay it beside the chapters on the grouse, the black game, and the other Scotch game birds, glance at the pictures of the eagles among the deer and ptarmigan on the mountain summits and " high tops," and draw his own conclusions. The Breath frcnn the Veldt deals with far wider subjects. It • Ti,. Natural History of Sorface,Fosding Docks. By J. G. F.Z.S. London : Longman and Co. [1265. net)

is at present the classic of pictoiial treatment of South African wild life, and shows that there is no variety of fauna of South Africa to which the author's pen cannot do justice.

The volume now before us is specialised in subject, but not in treatment. It is a splendid folio, meant for country-house libraries and zoological or sportsmen's collections of books of reference mainly. But no one could fail to prize it. It deals with that part of the wild duck family which seek their food mainly on the surface of the water, or on that part of the bottom which they can reach by inserting their bodies and groping in shoal water as swans do. The illustrations are mainly by Mr. Millais, though many of what we may term the " plates," or careful zoological portraits of the ducks in full plumage, are by Mr. Thorburn, and some good engravings by Mr. Lodge. We like all three, but the picturesqueness, vivacity, and " go" of Mr. Millais's paintings and drawings please us best. Two main lines of interest are dealt with. The first is the habits of the various surface-feed-

ing ducks. The second is the extraordinary process by which the male birds undergo a complete transformation of the colours of their feathers in summer, which is partly effected before shedding those feathers, a change as extraordinary as if the hair, beard, and whiskers of a man were to alter from black to red, and from red to grey, and from grey to chestnut, pepper-and-salt, and vivid green in a few months Creatures which we see daily domesticated often completely lose their interest from the human point of view, and ducks suffer from this depreciation. This is a mistake. As a body, the wild ducks, especially the surface-feeding kinds, are some of the cleverest of birds, and certainly the quickest to take the measure of human beings and their disposition. This is shown in the rapidity with which they find out " sanctuaries" and use them. We believe that the duck in bird life is potentially what the dog is in that of quadrupeds,—the most naturally inclined to be friendly with man, and possessed of the largest amount of brains. " Ducks are subtle," the translator of Dr. Caius's work on English Dogges wrote generations ago. It is quite true of them to-day. They are quite astonishingly assertive, too, when they think they can have things their own way. At Loversall Hall, near Doncaster, there was a reedy dyke in which an old tame drake had taken up his abode with two wives, both of whom were sitting on nests of eggs, and had become semi-wild, the dyke being a favourite haunt of wild ducks in winter. The present writer was walking down the dyke when he heard doleful howls and weeping round the next corner. When the corner was turned he found a small boy running round and round a bush, pursued by the drake, which

made as though he would eat him alive, and kept up a hoarse and ferocious quacking. On help arriving he transferred his attack to the writer, who fell in with his views 80 far as to join the small boy, affecting equal terror, and to run round the bush too, when, after a couple of circles, he caught the child's hand and effected an imaginary escape. The drake pursued till he was so breathless that he had to sit down, and so long as the ducks were sitting he would come rolling out through the reeds, and vigorously bite the legs of any one passing by.

Mr. Millais's study of the life-history of the common mallard will serve as an example of his treatment of the other

species. The young are very delicate :— "Though perfectly at home on the surface of a lake, a cold shower of rain or hail will destroy them almost as certainly as would a charge of shot. Knowing this, when they are surprised by a spring shower, the mother duck makes with all possible speed for the bank, and then gathering her brood together, and turning her back to the pelting storm, she spreadi her wings so that not a single drop may fall on them. I have seen no less than ten wild ducks all sitting together in a shower protecting their offspring with the umbrellas nature has made for them."

A very beautiful full-page drawing shows this pretty scene, the old ducks standing almost upright (back to the wind) leaning their breasts rather forward, and with their wings half spread rather in the way that sculptors' fancy is wont to depict the wings of guardian angels. Yet there is a. latent savagery in this affection of ducks for their brood. No Government inspector could be more severe towards those suspected of harbouring disease, or of being dangerous to the health of the rest :—

" The survival of the fittest is the law ingrained in her by nature, and woe betide the unhappy duckling which dares to lag behind or to show signs of exhaustion. In the great majority of cases its fate is sealed at once. It is either

abandoned, or put to death. I have several times seen

semi-domesticated wild ducks rush at a sick youngster and kill it by smashing its skull. They aro not all so devoid of sympathy. A mother duck had a sick young ono, which she struck on the head and laid insensible on the water. Instantly there was a violent commotion amongst the group of ducks which was resting on the lawn some ten yards off. They quacked loudly in astonishment, and one seized and bit the murderous mother with evident fury. So sudden and determined was her gallant attack that the criminal retired discomfited, rejoined her brood, and swam clean away. Now ensued a scene of a most touching character. The rescuer, betraying unmistakably her deep concern for the young one now nearly dead, turned it over with her bill, and did everything she could think of to restore it to life. In vain. Its feet could only paddle helplessly in the air, and so, as a last resource, she tenderly picked it up in the air, swam ashore, and placed it on the grass."

When three parts grown and unable to fiy, mallards gain much of their food by diving. They are omnivorous, and therefore range to Kamchatka and the Arctic moor:ands, in India to the Nerbudda, and in Africa as far south as Lake Tchad. They are also common in Western and Southern America. In finding food they are full of resource, as Mr. Millais shows in a charming drawing of mallards " treading for worms " in shallow water. They walk almost upright, stamping and paddling the mud. This habit, which Mr. Millais has been the first to note with pen and pencil, accounts for a curious illusion of an amateur on the Norfolk flats. He and a professional gunner were sitting out at night on Stiffkey muds, in moonlight so bewildering that the size of objects was greatly exaggerated. The gunner asked him if he had not seen two duck walk past him. He said no, only a man and a boy a long way off. " They were two mallard," said the gunner. Evidently they were in the upright position " treading " for worms, when they have just the attitude of a man bending forward and walking through shallow water.

The illustrations, especially the reproductions of exquisite pencil drawings of ducks in all sorts of activities—diving, feed- ing, playing, hiding from hawks, preening feathers, courting, fighting, and drinking—are beautifuL The highly technical process of " eclipse" and colour-change is illustrated by com- plete coloured series of the skins, and even of particular feathers, showing the eclipse and emergence of the plumage. This will be of high value to naturalists. Two-thirds of the

feathers undergo a double moult, but besides this the drake after the middle of June changes directly into the plumage of the female. This alteration is at first a combination of colour- change and of the renewal of feathers, for between June 15th and October 10th all the feathers, except those of the wings, shoulders, tail, and vent, are shed twice, the others being shed once. During all this time there is a constant sympathetic change of colour (pp. 13-28). The natural life of a mallard is about twenty years, which accounts for the failure of birds on lakes wholly protected to increase, if Mr. Millais's belief as to their age limit is correct, as we incline to think.