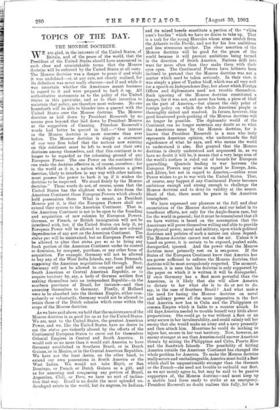 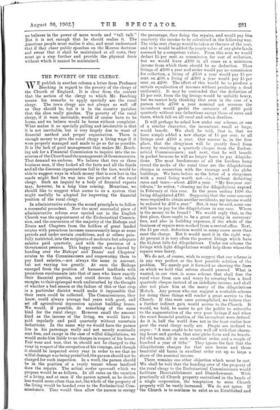 As we have said above, we hold that the maintenance of the Monroe doctrine is as good for us as for the United States. We are, next to the United States, the greatest American Power, and we, like the United States, have no desire to see the status quo violently altered by the efforts of the Continental European States to carve out for themselves Colonial Empires in Central and South America. It would suit us no more than it would suit America to have Germany established in Southern Brazil, or in Dutch Guiana, or in Mexico, or in the Central American Republics. We have not the least desire, on the other hand, to extend our own possessions in South America or the West Indies. We would not take Hayti, or San Domingo, or French or Dutch Guiana as a gift, and as for annexing and conquering any portion of Brazil, Argentina, Chili, or Peru, we have no sort of inclina- tion that way. Brazil is no doubt the most splendid un- developed estate iu the world, but its negroes, its Indians, and its mixed breeds constitute a portion of the " white man's burden " which we have no desire to take up. That is a task for the young Hercules whose arms stretch from the Atlantic to the Pacific, and not for his less ambitious and less strenuous mother. The clear assertion of the Monroe doctrine will be good for the peace of the world because it will prevent ambitions being turned in the direction of South America. Nations drift into wars far more often than they make them with their eyes open. The Continental Powers have hitherto been inclined to pretend that the Monroe doctrine was not a matter which need be taken seriously. In their view, it was simply a piece of Yankee bluff, which was all very well for a speech on Independence Day, but about which Foreign Offices and diplomatists need not trouble themselves. Such ignoring of the Monroe doctrine constituted .a danger, for it was not, and never has been, a piece of bluff on the part of America,—but almost the only point of foreign policy on which the whole American people is thoroughly united and resolved. In future, however, this good.humoured pooh-poohing of the Monroe doctrine will no longer be possible. The diplomatic world of the Continent can no longer entertain any doubt as to what the Americans mean by the Monroe doctrine, for it knows that President Roosevelt is a man who truly represents American opinion, who understands the full significance of what he says, and who means the world to understand it also. But granted that the Monroe doctrine is clearly understood and acquiesced in, as we have no doubt it will be, it means that a very large area of the world's surface is ruled out of bounds for European quarrelling. Quarrels leading to war between the European Powers may arise in regard to Europe, Asia, and Africa, but not in regard to America,—unless some Power wishes to go to war with the United States. That, of course, may happen if any Continental Power becomes ambitious enough and strong enough to challenge the Monroe doctrine and to deny its validity at the source. Short of that, there must be peace in the American hemisphere.

We have expressed our pleasure at the full and clear enunciation of the Monroe doctrine, and our belief in its beneficent effects, not only for the Anglo-Saxon race, but for the world in general ; but it must be remembered that all we have written is based on the assumption that the Americans will prove themselves willing and able to provide the physical power, naval and military, upon which political doctrines and policies of such a nature can alone depend. The Monroe doctrine cannot rest on the air. Unless it is based on power, it is certain to be exposed, pushed aside, disregarded, ignored. And the power that the Monroe doctrine must primarily rest on is sea-power. If the States of the European Continent know that America has sea-power sufficient to enforce the Monroe doctrine, that doctrine will be most scrupulously respected. The moment, however, it is seen that the doctrine is only supported by the paper on which it is written it will be disregarded. If once Germany has a fleet more powerful than the American, is it likely that she will allow America to dictate to her what she is to do or not to do, say, in the case of Southern Brazil ? And what makes the need for basing the Monroe doctrine on naval and military power all the more imperative is the fact that America now has in Cuba and the Philippines an oversea Empire which is liable to a counter attack. In old days America needed to trouble herself very little about preparations. She could go to war without a fleet or an army secure in her invulnerability, and could calmly tell her enemy that she would make an army and a navy presently and then attack him. Meantime he could do nothing to injure her, secure in her vast territory. Now, however, an enemy stronger at sea than America could answer American threats by seizing the Philippines and Cuba, Puerto Rico and the Sandwich Islands. The possibility of hitting America outside the American Continent has changed the whole problem for America. To make the Monroe doctrine really secure and unchallengeable,America must build a fleet which shall be unquestionably stronger than the German or the French—she need not trouble to outbuild our fleet, as we not merely agree to, but may be said to be passive supporters of, the Monroe doctrine—and must keep up a mobile land force ready to strike at an emergency. President Roosevelt no doubt realises this fully, for he is no believer in the power of mere words and " tall talk." But it is not enough that he should realise it. The American people must realise it also, and must understand that if they cheer public speeches on the Monroe doctrine and swear that it shall be maintained at all costs, they must go a step further and provide the physical force without which it cannot be maintained.