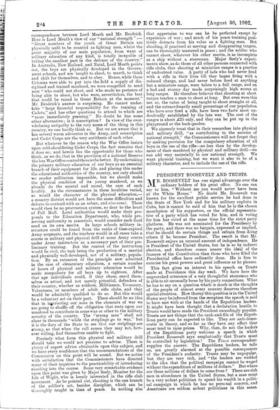 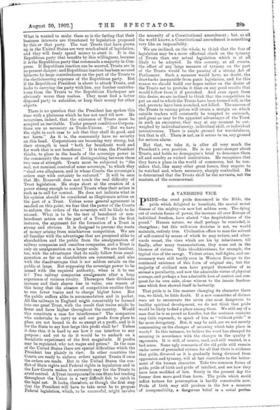 MR. ROOSEVELT has one signal advantage over the ordinary holders of his great office. No one can say to him, " Without me you would never have been at the White House." No doubt Mr. Roosevelt was known for the excellent public service he had done in the State of New York and for his military exploits in Cuba, but it cannot be said of him that he is the chosen mouthpiece of his supporters, or the official representa- tive of a party which has voted for him, and in voting for him has voted at the same time for the strict party platform. He was not nominated for the Presidency by the party, and there was no bargain, expressed or implied, that he should do certain things and refrain from doing others if he became President. The result is that Mr. Roosevelt enjoys an unusual amount of independence. He is President of the United States, but he is so by indirect election, and therefore comes nearer the ideal of the framers of the Constitution than those who have filled the Presidential office have ordinarily done. He is free to exercise his great powers and great influence as he pleases.

This fact gives an interest to his speech on Trusts made at Providence this day week. We have here the unprovoked utterance of a very thoughtful statesman who is able to sit unusually loose by his party connections. What he has to say on a question which is much in the thoughts of the people of almost every country deserves therefore special attention. How thorny this question is in the United States may be inferred from the reception the speech is said to have met with at the hands of the Republican leaders. It might have been thought that a declaration hostile to Trusts would have made the President exceedingly popular. Trusts are not things that the rank-and-file of the Repub- lican party can be expected to like. They are anti-demo- cratic in theory, and so far as they have any effect they must tend to raise prices. Why, then, do not the leaders of the Republican party welcome a speech in which President Roosevelt says emphatically that Trusts must be controlled by legislation ? The Times correspondent supplies the answer. The Republican leaders, he tells us, are greatly alarmed at the possible consequences of the President's audacity. Trusts may be unpopular, but they are very rich, and " the leaders are wedded to the idea that the political campaign cannot be waged without the expenditure of millions of dollars?' But where are these millions of dollars to come from ? There are rich men in abundance in the United States, but a man must be a very ardent politician to spend his wealth in a politi- cal campaign in which he has no personal concern, and Americans are seldom ardent politicians in this sense. What is wanted to make them so is the feeling that their business interests are threatened by legislation proposed by this or that party. The vast Trusts that have grown up in the United States are very much afraid of legislation, and they will freely spend money to avert it. It is the Republican party that benefits by this willingness, because it is the Republican party that commands a majority in Con- gress. If Republican inaction can be secured, Trusts are in no present danger; and Republican inaction has been secured hitherto by large contributions on the part of the Trusts to the electioneering expenses of the Republican party. But if the Republican President is about to attack Trusts, and looks to carrying the party with him, any further contribu- tions from the Trusts to the Republican Exchequer are obviously worse than useless. They must find a better disposed party to subsidise, or keep their money for other objects.

There is no question that the President has spoken this time with a plainness which he has not used till now. He recognises, indeed, that the existence of Trusts must be accepted as inevitable. Under present conditions Corpora- tions are as necessary as Trade-Unions. " But we have the right in each case to ask that they shall do good, and not harm." As it is, the community have no security on this head. Corporations are becoming very strong, but their strength is used " both for beneficent work and for work that is not beneficent." It is time, the President thinks, to place in the hands of the sovereign power in the community the means of distinguishing between these two uses of strength. Trusts must be subjected to " the real, not nominal, control of some sovereign," to which they " shall owe allegiance, and in whose Courts the sovereign's orders may with certainty be enforced." It will be seen that Mr. Roosevelt does not touch the real difficulty of Trust legislation. He stops short at the creation of a power strong enough to control Trusts when their action is such as to call for control. He does not indicate what in his opinion should be considered as illegitimate action on the part of a Trust. Unless some general agreement is reached on this point, we fear that the power of the Courts to enforce the orders of the sovereign will be likely to lie unused. What is to be the test of beneficent or non- beneficent action on the part of a Trust ? In the first instance, the argument for the formation of a Trust is strong and obvious. It is designed to prevent the waste of money arising from mischievous competition. We are all familiar with the advantages that are promised alike to shareholders and the public from the amalgamation of railway companies and omnibus companies, and a Trust is only an amalgamation on a larger scale. We are familiar, too, with the advantages that do really follow from amal- gamation as far as shareholders are concerned, and also with the disadvantages that it not seldom entails on the public at large. But supposing the sovereign power to be armed with the required authority, when is it to use it ? Two railway companies amalgamate after a long experience of ruinous rivalry. Thereupon their dividends increase and their shares rise in value, one reason of this being that the absence of competition enables them to run fewer trains and to charge higher fares. But the public suffers alike in accommodation and in pocket. All the railways in England might conceivably be formed into one great Trust, with the result that trains might be fewer and fares higher throughout the country. Would this constitute a case for interference The companies who undertake to carry us and our goods from place to place are not bound to do so except at a profit, and is it for the State to say how large this profit shall be ? Unless it does this, it is hard to see how it can interfere to any purpose ; and yet to do it would be to embark on a Socialistic experiment of the first magnitude. If profits may be regulated, why not wages and prices ? In the case of. the United States there are special difficulties which the President has plainly in view. In other countries the Courts are ready to enforce orders against Trusts if once the orders are made. But in the United States the con- flict of State rights and Federal rights in legislation and in the Law Courts makes it extremely easy for the Trusts to avoid control. A Trust incorporated in one State but trading throughout the Union is a very difficult fish to catch in the legal net. It looks, therefore, as though the first step that the President will have to take must be to propose Federal legislation, which, to be successful, might involve the necessity of a Constitutional amendment ; but, as all the world knows, a Constitutional amendment is something very like an impossibility.

We are inclined, on the whole, to th ink that the fear of legislation may be a more effectual check on the tyranny of Trusts than any actual legislation which is at all likely to be adopted. In this country, at all events, the effect of any large measure of tyranny on the part of the Trusts would be the passing of a strong Act of Parliament. Such a measure would have, no doubt, the drawbacks inseparable from panic legislation, and for this reason we should build our hopes rather on the desire of the Trusts not to provoke it than on any good results that would follow from it if provoked. And even apart from this desire, we are inclined to think that the competition to put an end to which the Trusts have been formed will, in the end, prove to have been scotched, not killed. The success of the Trusts in raising prices will create a margin on which outside traders will constantly be tempted to encroach, and great as may be the apparent advantages of the Trust in such an encounter, they may at any moment be out- weighed by individual energy, individual skill, or individual inventiveness. There is ample ground for watchfulness, but that is all. There is not, as it seems to us, any ground for serious alarm.

But that, we take it, is after all very much the President's own position. He is no panic-monger about Trusts, and holds no demagogue's brief to denounce them all and sundry as wicked institutions. He recognises that they have a place in the world of commerce, but he con- siders that, like many other great forces, they require to be watched and, where necessary, sharply controlled. He is determined that the Trusts shall be the servants, not the masters, of the commonweal.