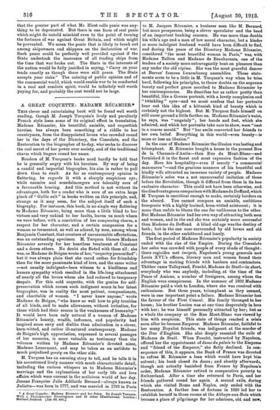 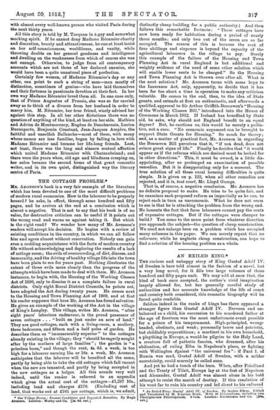 THIS clever and entertaining book will be found well worth reading, though M. Joseph Turquan's lively and peculiarly French style loses some of its original effect in translation. Madame Recamier, his beautiful, amiable, and coquettish heroine, has always been something of a riddle to her countrymen, from the disappointed lovers who crowded round her in the days of the Directory, the Consulate, and the Restoration to the biographer of to-day, who-seeks to discover the real secret of her power over society, and of the traditional charm which lingers round her name.

Readers of M. Turquan's books need hardly be told that he is generally angry with his heroines. By way of being a candid and impartial biographer, his aim is rather to pull down than to exalt. As far as contemporary opinion is flattering, he regards it with a sharply suspicious eye; while enemies and scandalmongers are tolerably sure of a favourable bearing. And this method is not without its advantages, both for a reader who is sure of an extra large pinch of " Gallic salt" in books written on this principle, and, strange as it may seem, for the subject itself of such a biography. For instance, this book, in no single way flattering to Madame Recamier, being more than a little blind to her virtues and very unkind to her faults, leaves us much where we were before, with a conviction of her conquering charm, a respect for her character, and a certain compassion for a woman so tormented, as well as adored, by men, among whom Benjamin Constant, that creature of unreasonable affectations, was an outstanding specimen. M. Turquan blames Madame Recamier severely for her heartless treatment of Constant and a dozen others. No doubt she flirted with them all: she was, as Madame de Boigne wrote of her, "coquetry personified": but it was always plain that she cared rather for friendship than for the more passionate kind of love, and the same writer —not usually indulgent—bore witness to a kindliness and human sympathy which resulted in the life-long attachment of nearly all the lovers whom she had reduced to temporary despair. For this cold coquette, with the genius for self- preservation which rouses such indignant scorn in her latest biographer, was in reality the moat patient, compassionate, and charitable of women. " I never knew anyone," wrote Madame de Boigne, "who knew so well how to pity troubles of all kinds, and to make allowances, without irritation, for those which had their source in the weaknesses of humanity." It would have been only natural if a woman of Madame Recamier's beauty, wealth, influence, and popularity had inspired more envy and dislike than admiration in a clever, keen-witted, and rather ill-natured contemporary. Madame de Boigne's high appreciation, expressed in several passages of her memoirs, is more valuable as testimony than the volumes written by Madame Recamier's devoted niece, Madame Lenormant, and may be taken as an antidote to much prejudiced gossip on the other side.

M. Turquan has an amusing story to tell, and he tells it in his accustomed lively manner with much characteristic detail, including the curious whispers as to Madame Recamier's marriage and the explanations of her early life and love affairs which were current in the malicious world of her day. Jeanne Francois° Julie Adelaide Bernard—always known as Juliette—was born in 1777, and was married in 1793 in Paris

• A Great Coquette : Madame Recamier and her Salon. By Joseph Turquan. With a Photogravure Frontispiece and 15 other Illustrations. Loudon: Herbert Jenkins. 112$. 6d. net.]

to M. Jacques Recamier, a business man like M. Bernard, but more prosperous, being a clever speculator and the head of an important banking concern. He was more than double his wife's age and a man of low moral character, but a kinder or more indulgent husband would have been difficult to find, and during the years of the Directory Madame Recamier, considered "the most beautiful woman in Paris," was, with Madame Tallien and Madame de Beauharnais, one of the leaders of a society more extravagantly bent on pleasure than any under the old regime. She was the most graceful dancer at Barras' famous Luxembourg assemblies. These state- ments seem to be a little in M. Turquan's way when be tries bard, following his principles, to throw doubts on the supreme beauty and perfect grace ascribed to Madame Recamier by her contemporaries. He describes her as rather pretty than beautiful, like a Greuze portrait., with a lovely complexion and " twinkling " eyes—and we must confess that her portraits bear out this idea of a kittenish kind of beauty which is certainly not the highest. But M. Turquan finds himself on still surer ground a little further on. Madame Recamier's waist, he says, was "ungainly"; her bands and feet, which she admired, and which her portraits take care to show, were "cast in a coarse mould." But "her smile converted her friends to her own belief. Everything in this world—even beauty—is more or less an illusion."

In the case of Madame Recamier the illusion was lasting and triumphant. M. Recamier bought a house in the present Rue de la Chaussee-d'Autin—then Rue du Mont-Blanc—and furnished it in the finest and most expensive fashion of the day. Here his hospitality—even if merely " a commercial manoeuvre "—and the gracious manners of his beautiful and kindly wife attracted an immense variety of people. Madame Recamier's salon was a not unsuccessful imitation of those before the Revolution, though it differed from them in its less exclusive character. This could not have been otherwise, and the disadvantageous comparison with Madame du Deffand, which M. Turquan is uncritical enough to make, certainly borders on the absurd. You cannot compare an amiable, ambitious bourgeoise with a highly trained, keen-witted aristocrat ; it is more than unfair to blame the one for unlikeness to the other. But Madame Recamier had her own way of attracting both men and women, and in the end she was certainly more successful than Madame du Deffand. A blind old age was the destiny of both ; but in the one case surrounded by old lovers and old friends, in the other embittered and lonely.

The first period of Madame Recamier's popularity in society ended with the rise of the Empire. During the Consulate her salon was crowded with people of every shade of thought : there regicides met émigrés, Napoleon's young generals met Louis XVI.'s officers, literary men and women found their advantage in making friends with bankers and contractors. Thither came Talleyrand, Fouche, Madame de Stael—in short, everybody who was anybody, including, at the time of the Peace of Amiens, a number of foreigners, among whom the English were conspicuous. In the summer of 1802 Madame Recamier paid a visit to London, where she was received with enthusiasm. But these years, triumphant as they seemed, were in one important point a failure. Madame Recamier lost the favour of the First Consul. His family thronged to her house ; his brother Lucien was at one time desperately in love with her ; he was himself personally attracted by her ; but as a whole the company at the Rue Mont-Blanc was viewed by him with suspicion. This state of things reached a crisis soon after he became Emperor. Madame Recamier, faithful to her many Royalist friends, was indignant at the murder of the Due d'Enghien. She also deeply resented the exile of Madame de Sta.. When Fouche, instructed by Napoleon, offered her the appointment of dame du palais to the Empress and "friend of the Emperor," she flatly declined. In con- sequence of this, it appears, the Bank of France was directed to refuse M. Recamier a loan which would have kept him solvent ; his bank closed its doors ; and shortly afterwards, though not actually banished from France by Napoleon's order, Madame Recamier retired in comparative poverty to Switzerland. After a time she returned to Paris, and her friends gathered round her again. A second exile, during which she visited Rome and Naples, only ended with the Restoration. A further loss of fortune in 1820 led her to establish herself in those rooms at the Abbaye-aux-Bois which became a place of pilgrimage for her admirers, old and new, with almost every well-known person who visited Paris during the next thirty years.

All this story is told by M. Turquan in a gay and somewhat mocking spirit. If he cannot deny Madame Recamier charity and discretion, beauty and attractiveness, he can at least insist on her self-consciousness, worldliness, and vanity, while throwing doubts on her general goodness and intelligence and dwelling on the weaknesses from which of course she was not exempt. Otherwise, to judge from all contemporary accounts which are not those of her declared enemies, she would have been a quite unnatural piece of perfection.

Certainly few women, of Madame Recamier's day or any other, can point to such a string of men—men mostly of distinction, sometimes of genius—who have laid themselves and their fortunes in passionate devotion at their feet. In her own way Madame Recamier loved them all. In one case only, that of Prince Augustus of Prussia, she was so far carried away as to think of a divorce from her husband in order to marry him. M. Recamier, her true friend, wisely advised her against this step. In all her other flirtations there was no question of anything of the kind, at least on her side. Mathieu and Adrien de Montmorency, Eugene de Beauharnais, Lucien Buonaparte, Benjamin Constant, Jean-Jacques Ampere, the faithful and unselfish Ballanche—most of these, with many whose names are less familiar, began by falling in love with Madame Recamier and became her life-long friends. Last, not least, there was the long and sincere mutual affection which united Madame Recamier with Chateaubriand; and there were the years when, old age and blindness creeping on, her salon became the second home of that great romantic writer, and in its own quiet, distinguished way the literary centre of Paris.