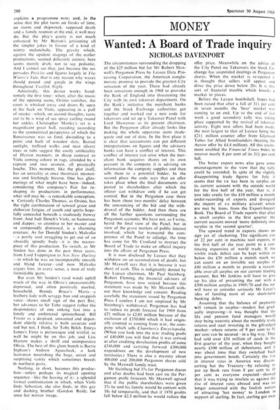 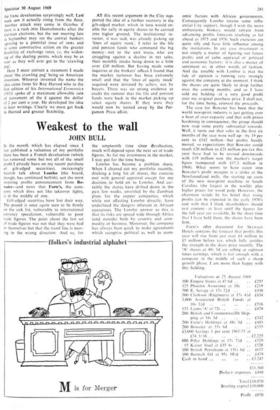 MONEY Wanted: A Board of Trade inquiry

The circumstances surrounding the dropping of the £25 million bid for Mr Robert Max- well's Pergamon Press by Leasco Data Pro- cessing Corporation, the American conglo- merate, promise to provide the greatest City sensation of the year. There had already been sensations enough in 1968 to provoke the Bank of England into threatening the City with its own takeover department. On the Bank's initiative the merchant banks and the Stock Exchange authorities got together and worked out a new code for takeovers and set up a Takeover Panel with Lord Shawcross as its present chairman. But the Pergamon affair already looks like making the whole apparatus seem inade- quate and out of date. In the first place it is clear that accountants can put different interpretations on figures and the advisory banks can have a conflict of interest. This conflict of interest can arise when the mer- chant bank acquires shares on its own account in the company it is advising on information the company supplies and then sells them to a potential bidder. In the second place the code says that an offer takes place when the final documents are posted to shareholders after which the offerer can withdraw only if he can get control. But in the Pergamon case there has been about two months' delay between the announcing of the bid and the with- drawal of the bidder. And then there are all the further questions surrounding the Pergamon accounts. We have not, as I write, heard the final view of the Panel, but in view of the grave matters of public interest involved, which far transcend the com- petence of the Panel to adjudge, the time has come for Mr Crosland to instruct the Board of Trade to make an official inquiry into the affairs of Pergamon Press.

It is now disclosed by Leasco that they withdrew on an accumulation of doubt, but Mr Maxwell says that it is because it was short of cash. This is indignantly denied by the Leasco chairman, Mr Paul Steinberg. Robert Fleming, the financial advisors of Pergamon, have now retired because this statement was made by Mr Maxwell with- out their knowledge and consent. Reading carefully the statement issued by Pergamon Press 1 confess I am not surprised by Mr Steinberg's withdrawal. Pergamon has had to reduce its profit forecast for 1969 from £21 million to £2.05 million because of the exclusion of £350,000 which it had origin- ally counted as coming from 'Esc, the com- pany which sells Chambers's Encyclopedia. (When you look into the ti.sc trading profit of £40,000 you will find that it was arrived at after crediting devaluation profits of some £346,000 and carrying forward £300,000 expenditure on the development of new territories.) There is also a mystery about 400,000 and 200,000 Pergamon shares sold by the Maxwell family trust.

Mr Steinberg bid 37s for Pergamon shares and after doubts had been cast on the Per- gamon profit forecasts Mr Maxwell agreed that if the public shareholders were given 37s he and his family would be content with 18s 6d temporarily, and that if 1970 profits fell below £2.3 million he would reduce the offer price. Meanwhile on the advice of the City Panel on Takeovers the Stock Ex- change has suspended dealings in Pergamon shares. When the market is re-opened it is thought that sellers will appear and drive the price down below 20s. It is this sort of financial trouble which knocks a market to pieces.

Before the Leasco bombshell, hopes had been raised that after a fall of 311 per cent in seven months the 'bear' market was coming to en end. Up to the end of last week a good secondary rally was taking place supported by the revival of takeover

activity. Eight new offers had been made, the next largest to that of Leasco being the

£211 million counter offer from Glynwed Tubes for Allied Ironfounders (beating the Acrow offer by £4.4 million). All this excite- ment enabled the Financial Times index to recover nearly 8 per cent of its 314 per cent fall.

The better export news also gave some encouragement to the view that the rally could be extended. In spite of the slightly

its current account with the outside world for the first half of the year, that is, if you take credit for the £10 million a month under-recording of exports and disregard the import of us military aircraft which are met by loans from the Export-Import Bank. The Board of Trade reports that after a small surplus in the first quarter the current account moved `more definitely into surplus in the second quarter'.

The upward trend in exports shows no sign yet of slackening. The significant rise of 22 per cent in machine tool exports in the first half of the year point to a con- tinuing expansion of world trade. If the visible trade deficit can be kept within or below the £30 million a month mark we can count on an invisible net surplus of £40 million a month to provide a reason- able over-all surplus on our current trading account. But Mr Jenkins will have to give

up his idea of presenting the ImF with a £300 million surplus in 1969/70 and the IMF will have to consider seriously Mr Lever's idea of funding most of our short-term banking debts.

Assuming that the balance of payments will remain in surplus—modest but grad- ually improving—it was thought that the life and pension fund managers would stop being neurotic about the monthly trade returns and start investing in the gilt-edged market—where returns of 9 per cent to 91 per cent can be secured—in a big way. They had sold over £34 million of stock in the first quarter of the year, when they bought nearly £100 million of debentures, and it was about time that they switched back

into government bonds. Certainly the rise in interest rates in America was discon-

that it was trying to insulate us against the rise of interest rates abroad and was .no longer concerned with the foolish notion of attracting 'hot money' to London In support of sterling. In fact, sterling got over the franc devaluation surprisingly well. Last week saw it actually rising from the floo,r. Another attack may come in October if there is a rush into Deutschmarks after the German elections, but the IMF meeting late in September may see the central bankers agreeing to a plentiful issue of spits and to some constructive action on the greater flexibility of exchange rates, i.e. the widen- ing of the dealing points, which may be as near as they will ever get to the 'crawling peg'. Here I must correct a statement I made about 'the crawling peg' being an American invention. Whoever invented the name the idea came from Sir Roy Harrod who in the first edition of his International Economics (1933) spoke of a maximum allowable rate of movement of the £ against the dollar of 2 per cent a year. He developed the idea in later writings. Clearly we must get back to Harrod and greater flexibility.

All this recent argument in the City sup- ported the idea of a further recovery in the gilt-edged market, which in turn would en- able the rally in equity shares to be carried into higher ground. The institutional in- vestor, it was said, was already picking up 'lines of equity stock'. I refer to the life and pension funds who command the big money—not to the unit trusts who are struggling against a decline in net sales, their monthly intake being down to a little over £10 million. But having made some inquiries at the brokers' offices I found that the market turnover has been extremely small and that the 'lines of equity stock' acquired were initiated by sellers, not by buyers. There was no strong evidence to credit the rumour that the life and pension funds were back in the market picking up select equity shares. If they were they would now be turned away by the Per- gamon Press affair.