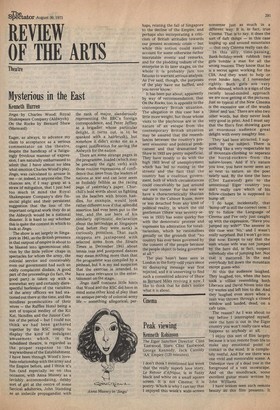 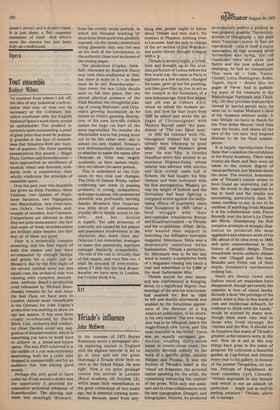 I don't think I mentioned last week that the really superb love story, Le Retour d'Afrique, is in fuzzy black and white on a small square screen. It is not Cinema; it is poetry. Which is why I can say that I enjoyed this week's wide-screen nonsense just as much in a different way. It is, in fact, true Cinema. That is to say, it does the sort of daft things — in this case leaping up and around mountains — that only Cinema really can do.

In this silly, time-passing, Bank-holiday-week rubbish two girls tumble a man for all the wrong reasons. They know that he is a secret agent working for the CIA And they want to help or even hinder him, if I remember rightly. Both girls are very dark-skinned, which is a sign of the racially broad-minded approach we are now getting at the pictures. Just as typical of the New Cinema is the excessive use of the words 'Jesus' and 'ass.' There are also two other words, but they never look very good in print. And I must say that the film's first showing gave an enormous audience great delight with every naughty line.

They had been attracted, I suppose, by the subject. There is nothing like a very respectable bit of mountain-climbing to separate the horrid-rockers from the nature-lovers. And if it's nature you love, you have never seen art so next to nature, as the poet nearly said. By the time the hero (Clint Eastwood) gets to the sensational Eiger country you don't really care which of his fellow-climbers he is supposed to bump off.

1 do hope, incidentally, that 'bump off' is still the correct term. I try to follow the Language of Cinema and I've only just caught up with the expression, "Have you jumped my wife?" The answer in this case was 'No,' and I wasn't really surprised. But I won't go into that now. Except to say that the man whose wife was not jumped by the hero did, in fact, suspect somebody else of jumping her. Not that it mattered. In the end everybody fell down the mountain except guess-who.

At this the audience laughed. They laughed, too, when the hero took a villian resembling both Liberace and David Niven into the icy wastes and left him to die. And they laughed even more when a man was thrown through a closed window and landed, dead, on a cafe table.

The reason? As I was about to say before I interrupted myself, once the hero is out in the Eiger country you won't really care what happens to anybody at all.

I enjoy this sort of film largely because it is too remote from life to make any emotional point of contact in the mind. It is completely restful. And for me there was one vivid and memorable scene. A Daliesque view of a dead tree in the foreground of a vast snowscape. And on the soundtrack, some excellent guitar music written by John Williams.

I have seldom seen such remote beauty as this film presents. It doesn't attract and it doesn't repel. It is just there, a flat, unpoetic statement of itself. And what's more the cinema has just been fully air-conditioned.