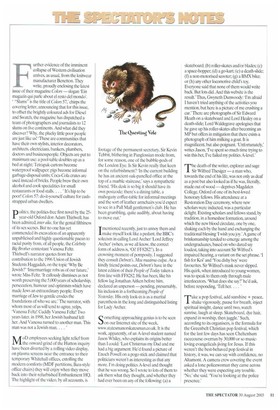 The Questing Vole F urther evidence of the imminent collapse of

Western civilisation arrives, as usual, from the knitwear manufacturer Benetton. They write, proudly enclosing the latest issue of their magazine Colors — slogan 'En magazin qui park about el resto del mondo'. '"Slums" is the title of Colors 57,' chirps the covering letter, announcing that for this issue, to offset the brightly coloured ads for Diesel and Swatch, the magazine has dispatched a team of photographers and journalists to 12 slums on five continents. And what did they discover? Why, the plucky little poor people are just like us! 'These are communities that have their own stylists, interior decorators, architects, electricians, bankers, plumbers, doctors and busines,speople. Objects are put to maximum use: a pool-table doubles up as a bed at night: Tetrapak cartons become waterproof wallpaper; pigs become informal garbage-disposal units; Coca-Cola crates are used instead of bricks. People brew their own alcohol and cook specialities for small restaurants or food stalls. . . . 'It's hip to be poor! Colors 57: do-it-yourself culture for cashstrapped urban dwellers.

po/itics. the politics-free first novel by the 25year-old Oxford don Adam Thirlwell, has been admired, inter alia, for the genial filthiness of its sex scenes. But no one has yet commended its excavation of an apparently unpublicised and highly questionable paean to racial purity from, of all people, the Celebrity Big Brother contestant Vanessa Feltz. Thirlwell's narrator quotes from her contribution to the 1996 Union of Jewish Students Haggadah, on the topic 'Why Be Jewish?' 'Intermarriage robs us of our future,' wrote Miss Feltz. 'It callously dismisses as not worth preserving the 5,000 years of scholarship, persecution, humour and optimism which have made Jews an extraordinary people. Every marriage of Jew to gentile erodes the foundations of who we are.' The narrator, with whom most of us will tend to agree, yelps, 'Vanessa Feltz! Cuddly Vanessa Feltz! Two years later, in 1998, her Jewish husband left her. And Vanessa turned to another man. This man was not a Jewish man. . . '

MoD employees seeking light relief from the onward grind of the Hutton inquiry have been diverted by a rolling video display, on plasma screens near the entrance to their temporary Whitehall offices, extolling the modern comforts (MDF partitions, Ikea-style office chairs) they will enjoy when they move back into their refurbished Embankment HQ. The highlight of the video, by all accounts, is

footage of the permanent secretary, Sir Kevin Tebbit, blithering in Panglossian mode from, for some reason, one of the bubble-pods of the London Eye. Is Sir Kevin really that keen on the refurbishment? In the current building he has an ancient oak-panelled office at the top of a marble staircase,' says a sympathetic friend. 'His desk is so big it should have its own postcode; there's a dining table, a mahogany coffee-table for informal meetings and the sort of leather armchairs you'd expect to see in a Pall Mall gentlemen's club. He has been grumbling, quite audibly, about having to move out.'

Imentioned recently, just to annoy them and make myself look like a pedant, the BBC's solecism in calling Lord Archer 'Lord Jeffrey Archer' (when, as we all know, the correct form of address is, 'Oi! FF8282!'). In a crowning moment of pomposity. I suggested they consult Debrett's. Mea maxima adpa. As a kindly friend points out, Debrett's have in the latest edition of their People of Today taken a firm line with FF8282. He has been, like his fellow lag Jonathan Aitken before him, declared an unperson — pending, presumably, his inclusion in a forthcoming People of Yesterday. His only look-in is as a marital parenthesis in the long and distinguished listing for Lady Archer.

Something approaching genius is to be seen on our Internet site of the week, www.statesmanorskatesman.co.uk. It is the work, apparently, of an A-level student named Jason Whiley, who explains its origins better than I could: 'Last Christmas my Dad and me had a big argument. He'd found a picture of Enoch Powell on a pogo stick and claimed that politicians weren't as interesting as that any more. I'm doing politics A-level and thought that he was wrong. So I wrote to lots of them to ask them what they thought, and whether they had ever been on any of the following: (a) a skateboard; (b) roller-skates and/or blades; (c) a space-hopper; (d) a go-kart: (e) a death-slide; (f) a non-motorised scooter, (g) a BMX bike; or (h) any other locomotive child's toy. Everyone said that none of them would write back. But lots did. And this website is the result.' Thus, Gwyneth Dunwoody: 'I'm afraid I haven't tried anything of the activities you mention, but here is a picture of me crushing a car.' There are photographs of Sir Edward Heath on a skateboard and Lord Healey on a death-slide; Lord Waldegrave apologises that he gave up his roller-skates after becoming an MP but offers in mitigation that there exists a photograph of him milking a goat. It is magnificent, but also poignant. 'Unfortunately,' writes Jason, Tye spent so much time trying to win this bet, I've failed my politics A-level.'

The death of the writer, explorer and sage Sir Wilfred Thesiger — a man who, towards the end of his life, was not only as deaf as a post but also looked as if he was, literally, made out of wood — deprives Magdalen College, Oxford of one of its best-loved honorary fellows. His attendance at a Restoration Day ceremony, where new scholars were inducted, was a particular delight. Existing scholars and fellows stand, by tradition, in a horseshoe formation, around which the new blood circulate, one by one, shaking each by the hand and exchanging the traditional blessing 'I wish you joy.' A game of brinksmanship tended to emerge among the undergraduates, based on who dared say loudest, taking into account Sir Wilfred's impaired hearing, a variant on the set phrase. 'I fish for Koi' and 'You dishy boy' were favourites. Sir Wilfred's mask never slipped. His quirk, when introduced to young women, was to speak to them only through male interlocutors. 'What does she say?' he'd ask, before responding, 'Tell her. . . . '

Make a pop festival, add sunshine + peace, 1 shake vigorously, pause for breath, inject spiritual insight, dance until two, watch sunrise, laugh at sleep. Skateboard, dye hair, expand in worship, then juggle.' Such, according to its organisers, is the formula for the Greenbelt Christian pop festival, which for the last few days has seen Cheltenham racecourse overrun by 30,000 or so musicloving evangelicals jiving for Jesus. If this weren't the best-behaved pop festival in history, it was, we can say with confidence, no Altamont. A camera crew covering the event asked a lone policewoman they came across whether they were expecting any trouble. No,' she said. 'You're looking at the police presence.'