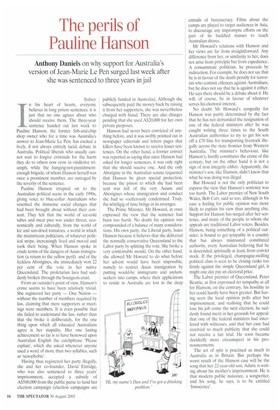 The perils of Pauline Hanson

1 n his heart of hearts, everyone believes in long prison sentences; it is just that no one agrees about who should receive them. The three-year sentence handed out last week to Pauline Hanson, the former fish-and-chip shop owner who for a time was Australia's answer to Jean-Marie Le Pen, has excited a lively, if not always entirely lucid, debate in Australia. Political liberals who usually cannot wait to forgive criminals for the harm they do to others now crow in vindictive triumph, while the hanging-not-punishmentenough brigade, of whom Hanson herself was once a prominent member, are outraged by the severity of the sentence.

Pauline Hanson irrupted on to the Australian political scene in the early 1990s, giving voice to blue-collar Australians who resented the immense social changes that had been brought about without their consent. They felt that the world of ice-cold tubes and meat pies was under threat, economically and culturally, from the world of kir and sun-dried tomatoes, a world in which the mainstream politicians, of whatever political stripe, increasingly lived and moved and took their being. When Hanson spoke in crude terms of the dangers of Asian immigration (a return to the yellow peril) and of the feckless Aborigines, she immediately won 22 per cent of the vote in her native Queensland. The proletarian lava had suddenly broken through the bourgeois crust.

From an outsider's point of view, Hanson's crime seems to have been relatively trivial. She registered her party — One Nation — without the number of members required by law, claiming that mere supporters at meetings were members. It is even possible that she failed to understand the law, rather than that she broke it deliberately, for the one thing upon which all educated Australians agree is her stupidity. Her one lasting achievement so far is to have bestowed upon Australian English the catchphrase 'Please explain', which she asked whenever anyone used a word of more than two syllables, such as 'xenophobic'.

Having thus registered her party illegally, she and her co-founder, David Ettridge, who was also sentenced to three years' imprisonment, accepted a subsidy of A$500,000 from the public purse to fund her election campaign (election campaigns are publicly funded in Australia). Although she subsequently paid the money back by raising it from her supporters, she was nevertheless charged with fraud. There are also charges pending that she used A$20,000 for her own private purposes.

Hanson had never been convicted of anything before, and it was swiftly pointed out in newspaper editorials and letters pages that killers have been known to receive lesser sentences. On the other hand, a former convict was reported as saying that since Hanson had asked for longer sentences, it was only right that she should receive one. And the only Aborigine in the Australian senate requested that Hanson be given special protection, because the prison to which she had been sent was full of the very Asians and Aborigines whose immigration and conduct she had so vociferously condemned. Truly, the whirligig of time brings in its revenges.

The Prime Minister, Mr Howard, at once expressed the view that the sentence had been too harsh. No doubt his opinion was compounded of a balance of many considerations. His own party, the Liberal party, hates Hanson because it believes that she delivered the normally conservative Queensland to the Labor party by splitting the vote. She broke a very comfortable mould. On the other hand, she allowed Mr Howard to do what before her advent would have been impossible, namely to restrict Asian immigration by putting would-be immigrants and asylumseekers into camps, where their applications to reside in Australia are lost in the deep

entrails of bureaucracy. Films about the camps are played to target audiences in Asia, to discourage any impromptu efforts on the part of its huddled masses to reach Australian shores.

Mr Howard's relations with Hanson and her views are far from straightforward. Any difference from her, or similarity to her, does not arise from principle but from expedience. A consummate politician, he proceeds by indirection. For example, he does not say that he is in favour of the death penalty for terrorists who commit offences against Australians, but he does not say that he is against it either. He says there should be a debate about it. He will, of course, be in favour of whatever serves his electoral interest.

No doubt Mr Howard's sympathy for Hanson was partly determined by the fact that he has not demanded the resignation of one of the federal ministers after he was caught writing three times to the South Australian authorities to try to get his son off a £70 fine for transporting livestock illegally across the state frontier from Western Australia. The minister's behaviour, like Hanson's, hardly constitutes the crime of the century, but on the other hand it is not a sign of iron integrity either. Apparently, the minister's son, like Hanson, didn't know that what he was doing was illegal.

But Howard is not the only politician to express the view that Hanson's sentence was too harsh. The Labor premier of New South Wales, Bob Carr, said so too, although in his case a feeling for public opinion was more likely to explain his view than anything else. Support for Hanson has surged after her sentence, and many of the people to whom she appeals are traditional Labor voters. Besides, Hanson, being something of a political outsider, is bound to get sympathy in a country that has always mistrusted constituted authority, every Australian believing that he is descended, spiritually at least, from convict stock. If the privileged, champagne-swilling political class is seen to be closing ranks too firmly against the simple Queensland girl, it might one day pay an electoral price.

The Labor premier of Queensland. Peter Beattie, at first expressed no sympathy at all for Hanson; on the contrary, his hostility to her could hardly have been greater. But having seen the local opinion polls after her imprisonment, and realising that he could lose his job come the next election, he suddenly found merit in her grounds for appeal: that one of the federal ministers had interfered with witnesses, and that her case had received so much publicity that she could not receive a fair trial. He soon became decidedly more circumspect in his pronouncements.

The art of spin is practised as much in Australia as in Britain. But perhaps the worst result of the Hanson case will be the song that her 22-year-old son, Adam, is writing about his mother's imprisonment. He is that modern public nuisance, a songwriter, and his song, he says, is to be entitled 'Innocence'.