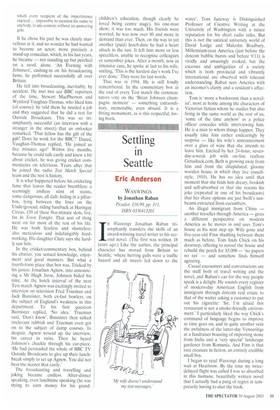 WAXWINGS by Jonathan Raban Picador, £16.99, pp. 311, ISBN 0330413201 1 n Waxwings Jonathan Raban triumphantly transfers the skills of an award-winning travel writer to his second novel. (The first was written 18 years ago.) Like the author, the principal character has moved from Britain to Seattle, 'where herring gulls were a traffic hazard and all streets led down to the

water'. Tom Janeway is Distinguished Professor of Creative Writing at the University of Washington with a minor reputation for his short radio talks. But this is not the satirical university world of David Lodge and Malcolm Bradbury. Millennium-year America (just before the dotcom bubble bursts and before 9/11) is vividly and amusingly evoked, but the excesses and ambiguities of a society which is both provincial and vibrantly international are observed with tolerant understanding. Raban sees America with an incomer's clarity and a resident's affection.

Tom is 'more a bookworm than a novelist', most at home among the characters of Victorian fiction whom he studies but also living in the same world as the rest of us, 'some of the time anyhow' as a police officer concedes while interviewing him. He is a man to whom things happen. They usually take him rather endearingly by surprise — like his wife's announcement over a glass of wine that she intends to leave him. Excited by her 24-hour, sevenday-a-week job with on-line realtors Getashack.com, Beth is growing away from him and from the dilapidated, gloomy wooden house in which they live (ranchstyle, 1910). He has no idea until that moment that she finds him dreary, bookish and self-absorbed or that she resents his joke (repeated in one of his broadcasts) that her share options are just Swift's sunbeams extracted from cucumbers.

An illegal immigrant from China — another traveller through America — gives a different perspective on modern America as he moves in and uses Tom's house as his next step up. Wife gone and five-year-old Finn shuttling between them much as before, Tom finds Chick on his doorstep, offering to reroof the house and rebuild the porch for 55,000 — 'no papers no tax' — and somehow finds himself agreeing.

Casual encounters and conversations are the stuff both of travel writing and the novel, and Raban's ear for the way people speak is a delight. He sounds every register of modern-day American English from immigrant through dotcom real estate to that of the waiter asking a customer to put out his cigarette: 'Sir, I'm afraid this restaurant is not a smoke-friendly environment; I particularly liked the way Chick's command of language begins to improve as time goes on, and in quite another vein the awfulness of the latter-day Veneerings at a fundraiser boasting of importing stone from India and a 'very special' landscape gardener from Romania. And Finn is that rare creature in fiction, an entirely credible small boy.

I began to read Waxwings during a long wait at Heathrow. By the time my twicedelayed flight was called I was so absorbed in this humane, beautifully written novel that I actually had a pang of regret at temporarily having to shut the book.