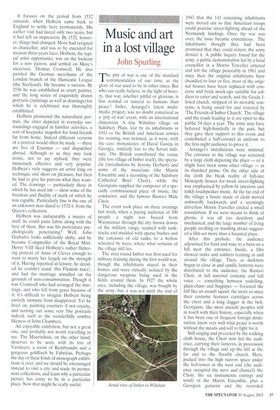 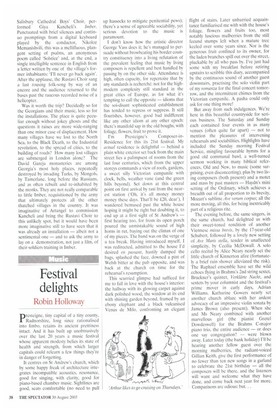 Music and art in a lost village

Thepity of war is one of the standard sentimentalities of our time, as the gloryof war used to be in other times. But who can really believe, in the light of history, that war, whether pitiful or glorious, is less normal or natural to humans than peace? Imber, Artangel's latest multimedia project, was no doubt conceived as a 'pity of war' event, with an international dimension. A tiny Wiltshire village on Salisbury Plain, lost by its inhabitants in 1943 to the British and American armies for training, was twinned, as it were, with the cave monasteries of David Gareja in Georgia, similarly lost to the Soviet military. The British contributed the venue (the lost village of Imber itself), the spectacle (installations by Jeremy Herbert) and some of the musicians (the Matrix Ensemble and a recording of the Salisbury Cathedral Boys' Choir), while the Georgians supplied the composer of a specially commissioned piece of music, the conductor, and the famous Rustavi Male Choir.

The event took place on three evenings last week, when a paying audience of 300 people a night was bussed from Warminster through the dry brown downs of the military range, seamed with tanktracks and studded with sparse bushes and the carcasses of old tanks, to a hollow screened by trees, where what remains of the village still lies.

The area round Imber was first used for military training during the first world war, though the inhabitants stayed in their homes and were virtually isolated by the dangerous weapons being used in the fields around them. In 1927 the whole area, including the village, was bought by the army, but it was not until the end of 1943 that the 143 remaining inhabitants were moved out so that American troops could practise street-fighting ahead of the Normandy landings. Once the war was over, the issue became contentious. The inhabitants thought they had been promised that they could return, the army denied it. A public inquiry found for the army, a public demonstration led by a local councillor in a Morris Traveller entered and left the village peaceably in 1961 and since then the original inhabitants have dwindled to four or five, most of the original houses have been replaced with concrete and brick mock-ups suitable for soldiers to enter and search, and the Grade Ilisted church, stripped of its movable contents, is being cared for and restored by 'The Friends of Imber Church'. The village and the roads leading to it are open to the public 54 days a year. The army may have behaved high-handedly in the past, but they gave their support to this event and contributed a half-colonel in uniform to the first-night audience to prove it.

Artangel's installations were minimal. The entrance to the village was screened by a large cloth depicting the place — or it might have been some other village — in its thatched prime. On the other side of the cloth the bleak reality of full-size Monopoly houses for mock street-fighting was emphasised by yellow-lit interiors and tinkly loudspeaker music. At the far end of the village a house made of cloth moved awkwardly backwards and a seemingly driverless Morris Traveller circled a small roundabout. If we were meant to think of ghosts, it was all too desultory and mechanical, and the large number of living people strolling or standing about suggested a film-set more than a haunted place.

After this prelude, the audience adjourned for food and wine to a barn on a hill near the entrance. Inside, a film showed tanks and soldiers training in and around the village. Then, as darkness began to close in and candle lanterns were distributed to the audience, the Rustavi Choir, in full national costume and full voice — something between yodelling, plain-chant and bagpipes — breasted the hill like an assault squad, the more so since their costume features cartridges across the chest and a long dagger in the belt. Georgians, like most ancient peoples still in touch with their history, especially when it has been one of frequent foreign domination, know very well what peace is worth without the means and will to fight for it.

Still singing and preceded by the walking cloth house, the Choir now led the audience, carrying their lanterns, in procession through the village and up the hill at the far end to the floodlit church. Here, packed into the high narrow space under the bell-tower at the west end (the audience occupied the nave and chancel) the Choir, the six instruments (strings and wind) of the Matrix Ensemble, plus a Georgian guitarist and the recorded

Salisbury Cathedral Boys' Choir, performed Giya Kancheli's Imber. Punctuated with brief silences and continuo promptings from a digital keyboard played by the conductor, Nikoloz Memanishvili, this was a mellifluous, plangent setting of psalms, an anonymous poem called 'Solstice' and, at the end, a single intelligible sentence in English from a letter written by one of the village's former inhabitants: 'I'll never go back again'. After the applause, the Rustavi Choir sang a last rousing folk-song by way of an encore and the audience returned to the buses past the raucous recorded noise of a helicopter.

Was it worth the trip? Decidedly so for the Georgians and their music, less so for the installations. The place is quite peculiar enough without jokey ghosts and the questions it raises are more wide-ranging than one minor case of displacement. How many villages have we lost to the North Sea, to the Black Death, to the Industrial revolution, to the spread of cities, to the building of roads? How many lost villages are submerged in London alone? The David Gareja monasteries are among Georgia's most holy places, repeatedly destroyed by invading Turks, by Mongols, by Tamerlane, long before the Russians, and as often rebuilt and re-inhabited by the monks. They are not really comparable to little Imber, requisitioned by the army that ultimately protects all the other thatched villages in the country. It was imaginative of Artangel to commission Kancheli and bring the Rustavi Choir to this unlikely spot, but it would have been more imaginative still to have seen that it was already an installation — albeit not a sentimental one — and to ask the army to lay on a demonstration, not just a film, of their soldiers training in Imber.