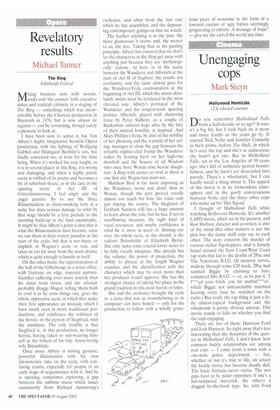 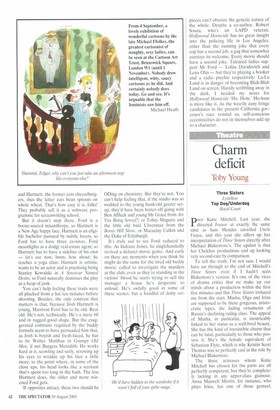 Do you remember Mulholland Falls from a half-decade or so ago? It wasn't a big hit, but I look back on it more and more fondly as the years go by. It starred Nick Nolte and Jennifer Connolly in their prime, before The Hulk, in which he's over the top and she's so cadaverous she hasn't got one. But in Mulholland Falls, set in the Los Angeles of 50 years ago, she's full of authentic period bountifulness, and he hasn't yet descended into parody. There's a whodunnit, but I can hardly recall a thing about it. The appeal of the movie is in its tremendous atmosphere and in the goofy conversations between Nolte and the three other cops who make up his 'Hat Squad'.

I thought of Mulholland Falls while watching Hollywood Homicide. It's another LAPD movie, albeit set in the present, and Ron Shelton, director and co-writer, is also of the mind that what matters is not the plot but the funny stuff cops say to each other. The story concerns the murder of various stellar hip-hoppers, and is loosely based around the East Coast/West Coast rap wars that led to the deaths of 2Pac and The Notorious B.I.G. (If memory serves, midway through some CD track, 2Pac had taunted Biggie by claiming to have romanced Mrs B.I.G. — or, as he put it, 'I f***ed your bitch, you fat muthaf***ef, which Biggie not unreasonably resented hearing every time he switched on the radio.) But really the rap thing is just a little almost-topical background and the whodunnit is pretty obvious anyway. This movie stands or falls on whether you find the cops engaging.

There are two of them: Harrison Ford and Josh Hartnett. So right away that's less interesting than the dynamics of the quartet in Mulholland Falls. I don't know how common buddy relationships are among real cops — I come from a town with a one-man police department — but, whether or not it's true to life, on screen the buddy movie has become deadly dull. The basic formula never varies. The two guys have to be polar opposites: if one's a hot-tempered maverick, the other's a dogged by-the-book type. So, with Ford

and Hartnett, the former eats cheeseburgers. thus the latter eats bean sprouts on whole wheat. That's how easy it is, folks! They probably sell it as a software programme for screenwriting school.

But it doesn't stop there. Ford is a booze-soured misanthrope, so Hartnett is a New Age happy face. Hartnett is an eligible bachelor pursued by nubile lovers, so Ford has to have three ex-wives. Ford moonlights as a dodgy real-estate agent, so Hartnett has to have a sideline of his own — let's see now, hmm, how about: he teaches a yoga class. Hartnett is artistic, wants to be an actor and is practising being Stanley Kowalski in A Streetcar Named Desire, so Ford naturally dismisses the play as a heap of junk.

You can't help feeling these traits were all plucked from a hat ten minutes before shooting. Besides, the only contrast that matters is that, because Josh Hartnett is young. Harrison Ford has to be old. Real old. He's not, technically. He's a mere 60 and in rugged good shape. But the exaggerated contrasts required by the buddy formula seem to have persuaded him that, as Josh is boyish and fresh-faced, he has to be Walter Matthau in Grumpy Old Men, if not Burgess Meredith. He works hard at it, scowling and surly, screwing up his eyes to wrinkle up his face a little more, to the point where, in some of the close ups, his head looks like a scrotum that's spent too long in the bath. The less Hartnett does, the older and more wizened Ford gets.

If opposites attract, these two should be ODing on chemistry. But they're not. You can't help feeling that, if the studio was so wedded to the young hunk/old geezer setup, they'd have been better off going with Ben Affleck and young Mr Grace from Are You Being Served?, or Tobey Maguire and the little old bald Ulsterman from the Benny Hill Show, or Macaulay Culkin and the Duke of Edinburgh.

It's truly sad to see Ford reduced to this. As Indiana Jones, he singlehandedly revived a defunct movie genre. And early on there are moments when you think he might do the same for the tired old buddy movie: called to investigate the murders at the club, even as they're standing in the victims' blood he starts trying to sell the manager a house he's desperate to unload. He's awfully good in some of these scenes, but a handful of dotty set pieces can't obscure the generic nature of the whole. Despite a co-author, Robert Souza, who's an LAPD veteran, Hollywood Homicide has no great insight into the policing life in Los Angeles, other than the running joke that every cop has a second job, a gag that somewhat outstays its welcome. Every movie should have a second joke. Talented ladies support Mr Ford — Lolita Davidovich and Lena Olin — but they're playing a hooker and a radio psychic respectively: La-La Land is in danger of becoming Blah-Blah Land on screen. Hastily scribbling away in the dark, I headed my notes for Hollywood Homicide 'Ho. Hom.' Ho-hum is more like it. As the wearily zany fringe candidates in the present California governor's race remind us, self-conscious eccentricities do not in themselves add up to a character.