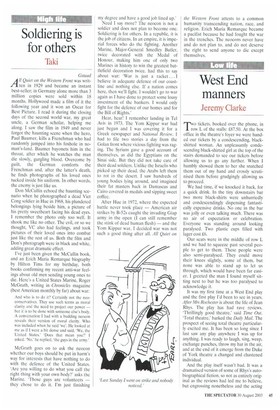 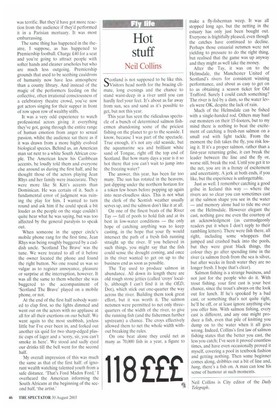 ro tickets, booked over the phone, in ow L of the stalls: £87.50. At the box office in the theatre's foyer we were handed our tickets by a condescending, blackshirted woman. An unpleasantly condescending black-shirted girl at the top of the stairs demanded to see our tickets before allowing us to go any further. When I humbly showed them to her she snatched them out of my hand and crossly scrutinised them before grudgingly allowing us to proceed.

We had time, if we knocked it back, for a quick drink. In the tiny downstairs bar two more black-shirts were unhurriedly and condescendingly dispensing fantastically expensive drinks. No one in the bar was jolly or even talking much. There was no air of expectation or celebration. Everyone was standing around looking paralysed. Two plastic cups filled with lager cost £6.

Our seats were in the middle of row L and we had to squeeze past several people to get to them. These people were also semi-paralysed. They could move their knees slightly, some of them, but none was able to stand up to let us through, which would have been far easier. I greeted the man I found myself sitting next to but he was too paralysed to acknowledge it.

It was my first time at a West End play and the first play I'd been to see in years. After Mrs Rochester is about the life of Jean Rhys. The play has had rave reviews. 'Thrillingly good theatre,' said Time Out. 'Total theatre,' barked the Daily Mail. The prospect of seeing total theatre particularly excited me. It has been so long since I last saw any play anywhere I was up for anything. I was ready to laugh, sing, weep, exchange punches, throw my hat in the air, and at the end of it emerge from the Duke of York theatre a changed and chastened individual.

And the play itself wasn't bad. It was a dramatised version of some of Rhys's autobiographical fiction, so not as entirely original as the reviews had led me to believe, but engrossing nonetheless and the acting was terrific. But they'd have got more reaction from the audience if they'd performed it in a Parisian mortuary. It was most embarrassing.

The same thing has happened in the theatre, I suppose, as has happened to Premiership football. Charge £40 for a seat and you're going to attract people with softer hands and cleaner arseholes but who are much less outgoing. Premiership grounds that used to be seething cauldrons of humanity now have less atmosphere than a county library. And instead of the magic of the performers feeding on the collective, often irrational consciousness of a celebratory theatre crowd, you've now got actors singing for their supper in front of row upon row of wealthy stiffs.

It was a very odd experience to watch professional actors giving it everything they've got, going through the entire range of human emotion from anger to sexual passion, whilst the audience sat there as if it was drawn from a more highly evolved biological species. Behind us, an American man sat next to a white South African couple. The American knew his Caribbean accents, he loudly told them and everyone else around us during the first half, and he thought those of the actors playing Jean Rhys and her family were inaccurate. They were more like St Kitt's accents than Dominican. He was certain of it. Such a fundamental error of judgment was ruining the play for him. I wanted to turn round and ask him if he could speak a bit louder as the people on the stage couldn't quite hear what he was saying, but was too affected by the general paralysis to speak out.

When someone in the upper circle's mobile phone rang for the first time, Jean Rhys was being roughly buggered by a caddish uncle. 'Scotland The Brave' was the tune. We were treated to all of it before the owner located the phone and found the right button. No one round us was so vulgar as to register annoyance, pleasure or surprise at the interruption, however. It was all the same to them whether she was buggered to the accompaniment of 'Scotland The Brave' played on a mobile phone, or not.

At the end of the first half nobody wanted to clap first, so the lights dimmed and went out on the actors with no applause at all for all their exertions on our behalf. We went again to the most snobbish, joyless little bar I've ever been in, and forked out another six quid for two sharp-edged plastic cups of lager and a 'sorry, sir, you can't smoke in here'. We stood and sadly eyed our drinks till the bell went for the second half.

My overall impression of this was much the same as that of the first half: of ignorant wealth watching talented youth from a safe distance. 'That's Ford Madox Ford,' I overheard the American informing the South Africans at the beginning of the second half, 'the artist.'