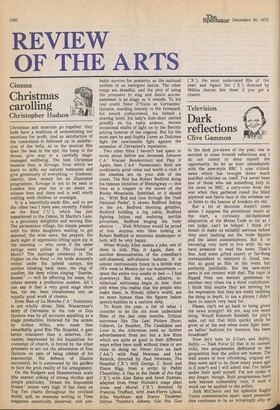 Christmas and musicals go together: they both have a tradition of orchestrating our emotions for profit. And as satisfaction of the conscience is followed up in satisfaction of the belly, so in the musical film does the tear in the eye, the lump in the throat, give way to a carefully stagemanaged wellbeing. The best Christmas musical then is Scrooge, from which we learn to stifle our natural meanness and give generously of everything — kindness, charity, love, money for an illustrated programme. Scrooge is not to be seen in London this year but is no doubt on release here and there and is well worth visiting with children or nostalgia.

It is a beautifully-made film, and so are the other two I have seen recently. Fiddler on the Roof (' U '), which has just transferred to the Odeon, St Martin's Lane, is a genuinely delightful and moving film. The picturesque village, the simple peasant with his three daughters waiting to get married, the wise saws, the prayers, the dark night of oppression lifting upon joy in the morning — who cares if the same strings were pulled in The Sound of Music? The marriage ceremony in The Fiddler on the Roof — the bride demurely veiled under the upheld canopy, the mother blinking back tears, the ring of candles, the deep voices singing Sunrise, Sunset' — will be affecting for some, for others merely a production number. All I can say is that a very good stage show has, for me, been transformed into an equally good work of cinema.

Even Man of La Mancha (' A ' Dominion) is not wholly dross. Dale Wasserman's story of Cervantes in the role of Don Quixote was by all accounts appalling as a stage production. Directed for the screen by Arthur Hiller, who made that remarkably good film The Hospital, it gets better treatment than it deserves. Cervantes, imprisoned by the Inquisition for contempt of church, is forced by the other prisoners to act out the adventures of Don Quixote on pain of being robbed of his manuscript. His defence of illusion successful, he is summoned by the gaolers to face the grim reality of his arraignment.

On the Rodgers and Hammerstein scale (the neatest yoking of strong rhythm and simple platitude), 'Dream the Impossible Dream' scores very high. It has risen on Top Ten charts throughout the civilised world, and, as someone writing in Time magazine caustically observed, will pro bably survive for posterity as the national anthem of an emergent nation. The other songs are dreadful, and the ploy of using the prisoners to sing and dance accompaniment is as stagy as it sounds. To his real credit Peter O'Toole as Cervantes/ Quixote, standing bravely in the farmyard, his sword corkscrewed, his helmet a shaving bowl, his lady's dish-clout carried proudly on his rusty armour, throws occasional shafts of light on to the fiercely pitying humour of the original. But for the most part he and Sophia Loren as Dulcinea fight the unwinnable fight against the assassins of Cervantes's reputation.

Two other films I haven't had space to write about before are Jeremiah Johnson (' A ' Warner Rendezvous) and Play It Again, Sam (' AA ' Paramount). Both are moderately good value and worth a visit if the cinemas are on your side of the street. The first has Robert Redford doing his famous imitation of Hemingway — this time as a trapper in the snows of the Rocky Mountains. Subtitled, or it should be, 'With Rod and Gun through the Utah National Parks', it shows Redford fishing in the ice, Redford shooting grizzlies, Redford building a log cabin, Redford fighting Injuns and enduring terrible privations, Redford singing the body electric . . . Walt Whitman would be proud of him. Anyone who likes looking at Robert Redford or mountain landscapes or both will be very happy.

When Woody Allen makes a joke, one of them is sick. Play It Again, Sam, is another demonstration of the comedian's self-obsessed, self-abusive humour. It is almost continuously funny in a brittle way (We went to Mexico for our honeymoon — spent the entire two weeks in bed — I had dysentery). But the sour, allusive, intellectual witticisms begin to lose their pith when you realise that the people who make them, in Woody Allen's world, are no more human than the figures below speech-bubbles in a cartoon strip.

To finish the year, a list of what I consider to be the six most underrated films of the last nine months. Critical successes like The Last Picture Show, Cabaret, Le Boucher, The Candidate and Love in the Afternoon need no further advertisement from me: but a few films which are quite as good in their different ways either have sunk without trace or are close to doing so: Never Give an Inch (' AA ') with Paul Newman and Lee Remick, directed by Paul Newman; The Hospital (` X ') with George C. Scott and Diana Rigg, from a script by Paddy Chayefsky; A Day in the Death of Joe Egg (' X ') with Alan Bates and Janet Suzman, adapted from Peter Nichols's stage play; Anne and Muriel (' X ') directed by Francois Truffaut, with Jean-Pierre Laud, Kika Markham and Stacey Tendeter; Dalton Trumbo's Johnny Got His Gun ('X '), the most underrated film of the year; and Agnus Del (' X ') directed by Miklos Jancso. See them if you get a chance.