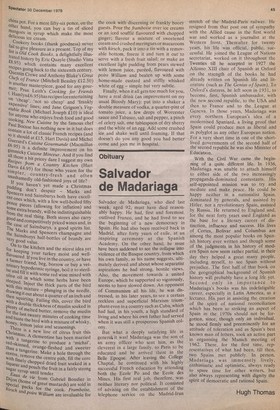 Salvador de Madariaga, who died last week, aged 92, must have died reasonably happy. He had, first and foremost. outlived Franco, and he had lived to see the beginning of a new democracy in Spain. He had also been received back in Madrid, after forty years of exile, at an inspiring ceremony at the Spanish Academy. On the other hand, he must have been saddened to see the collapse into violence of the Basque country, from which his own family, as his name suggests, ultimately derived and about whose separatist aspirations he had strong, hostile views. Also, the movement towards a united Europe, which he supported so vigorously, seems to have slowed down. An opponent of Communism all his life, he was distressed, in his later years, to see a certain reckless and superficial Marxism triumphant even in a country such as Cuba, which had had, in his youth, a high standard of living and where his own father had served when it was still a prosperous Spanish colony. But what a deeply satisfying life in general. it was! Madariaga was the son of an army officer who sent him, as the cleverest in a large family, to Paris to be educated and he arrived there in the Belle Epoque. After leaving the College Chaptal, he continued with his highly successful French education by attending both the Ecole Po and the Ecole des Mines. His first real job, therefore, was neither literary nor political. It consisted of advising on the establishment of the telephone service on the Madrid-Irun stretch of the Madrid-Paris railway. He resigned from that post out of sympathy with the Allied Cause in the first world war and worked as a journalist at the Western front. Thereafter for twenty years, his life was official, public, suc cessful. He joined the League of Nations secretariat, worked on it throughout the Twenties till he accepted in 1927 the Alfonso XIII chair of Spanish at Oxford on the strength of the books he had already written on Spanish life and literature (such as The Genius of Spain). To Oxford's distress, he left soon in 1931, to become, first, Spanish ambassador, with the new second republic, to the USA and then to France and to the League at Geneva. In those years, Madariaga was every northern European's idea of a modernised Spaniard, a living proof that Spain could produce men as liberal and as polyglot as any other European nation. For a very short time in one of the shortlived governments of the second half of the second republic he was also Minister of Education.

With the Civil War came the beginning of a quite different life. In 1936, Madariaga was unable to attach himself to either side of the two increasingly propaganda-dominated contestants. His self-appointed mission was to try and mediate and make peace. He could be happy neither in a nationalist Spain, dominated by generals, and assisted by Hitler, nor a revolutionary Spain, assisted by Russia. He returned to England and, for the next forty years used England as the base for a literary career of distinction, influence and success. His lives of Cortes, Bolivar and Columbus are among the most popular books on Spanish history ever written and though some of the judgments in his history of modern Spain now seem rather partial, in their day they helped a great many people, including myself, to see Spain without prejudice. The first half of that book on the geographical background of Spanish history will probably have a long life yet. Second only in importance to Madariaga's books was his indefatigable career, especially in Latin America, as a lecturer. His part in assisting the creation of the spirit of national reconciliation which has been so striking an aspect of Spain in the 1970s should not be forgotten, since, though only an individual, he stood firmly and preeminently for an attitude of toleration and as Spain's best known man of letters, took an active part in organising the Munich meeting of 1962. There, for the first time, representatives of what had been, till then, two Spains met publicly. In person, Madariaga was immensely lively, enthusiastic and optimistic, always ready to spare time for other writers, but also always representing with dignity the spirit of democratic and rational Spain.