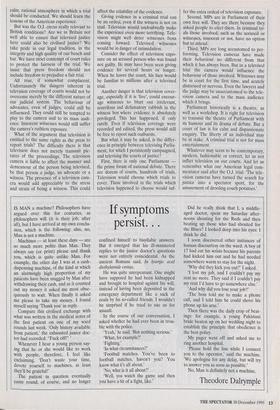 IS MAN a machine? Philosophers have argued over this for centuries, as philosophers will (it is their job, after all), but I have arrived at my own conclu- sion, which is the following: alas, no, Man is not a machine.

Machines — at least these days — are so much more polite than Man. They always say (or print) please and thank you, which is quite unlike Man. For example, the other day I was at a cash- dispensing machine, of the kind at which an alarmingly high proportion of my patients have been mugged by Man after withdrawing their cash, and as it counted out my money it asked me most obse- quiously to wait. When finally it asked me please to take my money, I found myself saying 'Thank you' in reply.

Compare this civilised exchange with what was written in the medical notes of the first patient on one of my ward rounds last week. 'Only history available from patient,' the exhausted junior doc- tor had recorded: "Fuck off!" ' Whenever I hear a young person say- ing that he or she would like to work with people, therefore, I feel like exclaiming, 'Don't waste your time, devote yourself to machines, at least they'll be grateful!' The patient in question eventually came round, of course, and no longer

confined himself to bisyllabic answers. But it emerged that his ill-mannered replies to the junior doctor's questions were not entirely coincidental. As the ancient Romans said, In lysergic acid diethylamide veritas.

He was quite unrepentant. One might have supposed he had been kidnapped and brought to hospital against his will, instead of having been deposited in the emergency department like a sack of coals by his so-called friends. I wouldn't be surprised if he tried to sue us for assault.

In the course of our conversation, I asked whether he had ever been in trou- ble with the police.

`Well, you watch the game and then you have a bit of a fight, like.' Did he really think that I, a middle- aged doctor, spent my Saturday after- noons shouting for the Reds and then beating up those who had shouted for the Blues? I looked deep into his eyes: I think he did.

I soon discovered other instances of human discourtesy on the ward. A boy of 17 had cut his wrists because his parents had kicked him out and he had needed somewhere warm to stay for the night.

`Why did they kick you out?' I asked.

`And why did you lose your job?'

`The boss told me to make a phone call, and I told him he could shove his phone up his arse.'

Then there was the daily crop of beat- ings: for example, a young Pakistani bride beaten up on her wedding night to establish the principle that obedience is the best policy.

My pager went off and asked me to ring another hospital.

`Please hold the line while I connect you to the operator,' said the machine. `We apologise for any delay, but will try to answer you as soon as possible.'

No, Man is definitely not a machine.