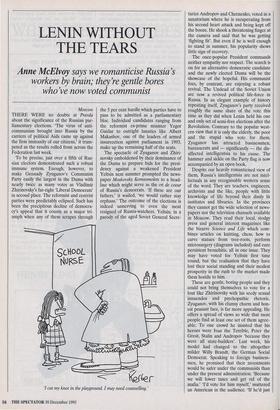 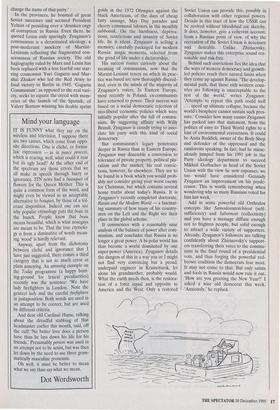 LENIN WITHOUT THE TEARS

Moscow THERE WERE no doubts at Pravda about the significance of the Russian par- liamentary elections. 'The virus of anti- communism brought into Russia by the carriers of political Aids came up against the firm immunity of our citizens,' it trum- peted as the results rolled from across the Federation last week.

To be precise, just over a fifth of Rus- sian electors demonstrated such a robust immune system. Enough, however, to make Gennady Zyuganov's Communist Party easily the largest in the Duma with nearly twice as many votes as Vladimir Zhirinovsky's far-right 'Liberal Democrats' in second place. The reformist and centrist parties were predictably eclipsed. Such has been the precipitous decline of democra- cy's appeal that it counts as a major tri- umph when any of them scrapes through the 5 per cent hurdle which parties have to pass to be admitted as a parliamentary bloc. Individual candidates ranging from the reformist ex-prime minister Yegor Gaidar to outright lunatics like Albert Makashov, one of the leaders of armed insurrection against parliament in 1993, make up the remaining half of the seats.

The spectacle of Zyuganov and Zhiri- novsky emboldened by their dominance of the Duma to prepare bids for the presi- dency against a weakened President Yeltsin next summer prompted the news- paper Moskovsky Komsomolets to a head- line which might serve as the cri de coeur of Russia's democrats. 'If these are our fathers,' it wailed, 'we would rather stay orphans.' The outcome of the elections is indeed unnerving to even the most resigned of Russia-watchers. Yeltsin, in a parody of the aged Soviet General Secre- `I cut my knee in the playground. I may need counselling.' taries Andropov and Chemenko, voted in a sanatorium where he is recuperating from his second heart attack and being kept off the booze. He shook a threatening finger at the camera and said that he was getting `fighting fit'. But even if he is well enough to stand in summer, his popularity shows little sign of recovery.

The once-popular President commands neither sympathy nor respect. The search is on for an alternative democratic candidate and the newly elected Duma will be the showcase of the hopeful. His communist foes, by contrast, are enjoying a robust revival. The Undead of the Soviet Union are now a revived political life-force in Russia. In an elegant example of history repeating itself, Zyuganov's party received roughly the same share of the vote this time as they did when Lenin held his one and only set of semi-free elections after the Revolution. Contrary to the popular west- ern view that it is only the elderly, the poor and the stupid who vote for them, Zyuganov has attracted businessmen, bureaucrats and — significantly — the dis- affected intelligentsia to his cause. The hammer and sickle on the Party flag is now accompanied by an open book.

Despite our heavily romanticised view of them, Russia's intelligentsia are not intel- lectuals in any recognisable western sense of the word. They are teachers, engineers, archivists and the like, people with little knowledge of life beyond their dimly lit institutes and libraries. In the provinces they cannot get the wide selection of news- papers nor the television channels available in Moscow. They read their local, stodgy press and general interest magazines like the bizarre Science and Life which com- bines articles on knitting, chess, how to carve statues from tree-roots, perform microsurgery (diagrams included) and cure persistent bronchitis, all in one issue. They may have voted for Yeltsin first time round, but the realisation that they have lost their social standing and their modest prosperity in the rush to the market made them hostile to him.

These are gentle, boring people and they could not bring themselves to vote for a lout like Zhirinovsky with his seedy sexual innuendos and psychopathic rhetoric. Zyuganov, with his clumsy charm and hon- est peasant face, is far more appealing. He offers a spread of views so wide that most people find at least one set of them agree- able. To one crowd he insisted that his heroes were Ivan the Terrible, Peter the Great, Stalin and Andropov 'because they were all state-builders'. Last week, his model had changed to the altogether milder Willy Brandt, the German Social Democrat. Speaking to foreign business- men, he promised that their investments would be safer under the communists than under the present administration. 'Because we will lower taxes and get rid of the mafia."I'd vote for him myself,' muttered an American in the audience. 'If he'd just change the name of that party.'

In the provinces, he boasted of great Soviet successes and accused President Yeltsin of presiding over a 'drunken orgy of corruption' in Russia. Even there, he quoted Lenin only sparingly. Zyuganov's communism is a deracinated ideology, a post-modernist mockery of Marxist- Leninism reflecting the fragmented con- sciousness of Russian society. The old hagiography ruled by Marx and Lenin has been replaced with a less fearful one star- ring cosmonaut Yuri Gagarin and Mar- shal Zhukov who led the Red Army to final victory in Berlin in 1945. `Gagarin Communism', as opposed to the real vari- ety, seeks to equate the creed with mem- ories of the launch of the Sputnik, of Valery Bortzov winning his double sprint golds in the 1972 Olympics against the black Americans, of the days of cheap fatty sausage, May Day parades and cheery communal labours in the monthly subbotnik. On the harshness, depriva- tions, restrictions and insanity of Soviet life, he is silent. Zyuganov is selling a memory, carefully packaged for modern Russia: magic moments, selected from the grind of life under a dictatorship.

His success rouses curiosity about the meaning of communism, now that the Marxist-Leninist tenets on which its prac- tice was based are now thoroughly discred- ited, even in the minds of the majority of Zyuganov's voters. In Eastern Europe, most recently in Poland, ex-communists have returned to power. Their success was based on a social democratic rejection of neo-liberal economic policies which were initially popular after the fall of commu- nism. By suggesting affinity' with Willy Brandt, Zyuganov is cannily trying to asso- ciate his party with this kind of social democracy.

But communism's legacy penetrates deeper in Russia than in Eastern Europe. Zyuganov may dissemble a conversion to tolerance of private property, political plu- ralism and the market; his real convic- tions, however, lie elsewhere. They are to be found in a book which you would prob- ably not consider giving your worst enemy for Christmas, but which contains several home truths about today's Russia. It is Zyuganov's recently completed doctorate, Russia and the Modem World — a fascinat- ing summary of how many of his country- men on the Left and the Right see their place in the global scheme.

It commences with a reasonably sane analysis of the balance of power after com- munism, and concludes that Russia is no longer a great power. A bi-polar world has thus become a world dominated by one super-power (America). Zyuganov details the dangers of this in a way you or I might not find very convincing but a proud, underpaid engineer in Krasnoyarsk, let alone his grandmother, probably would. What the earth needs then, is the restora- tion of a force equal and opposite to America and the West. Only a restored Soviet Union can provide this, possibly in collaboration with other regional powers. Details in this tract of how the USSR can be revived without bloodshed are sketchy. It does, however, give a coherent account, from a Russian point of view, of why the recreation of the Soviet Union is necessary and desirable. Unlike Zhirinovsky, Zyuganov makes this enterprise sound rea- sonable and risk-free.

Behind such convictions lies the idea that the ways of western democracy and growth- led policies reach their natural limits when they come up against Russia. 'The develop- mental path, that these rich western coun- tries are following is unacceptable to the rest of the world,' writes Zyuganov. `Attempts to repeat this path could well . . . speed up ultimate collapse, because the world's biosphere cannot sustain such pres- sure.' Consider how many causes Zyuganov has packed into that statement, from the politics of envy to Third World rights to a hint of environmental correctness. It could be Anita Roddick, owner of the Body Shop and defender of the oppressed and the rainforests speaking. In fact, had he mirac- ulously jumped from his 1991 job in the Party ideology department to succeed Mikhail Gorbachev as head of the Soviet Union with the view he now espouses, we too would have considered Gennady Zyuganov an improvement on his prede- cessor. This is worth remembering when wondering why so many Russians voted for him last week.

Add in some powerful old Orthodox concepts like Samodostatotchnost (self- sufficiency) and Sabornost (collectivity) and you have a message diffuse enough not to frighten people, but solid enough to attract a wide variety of supporters. Already, Zyuganov's followers are talking confidently about Zhirinovsky's support- ers transferring their votes to the commu- nists in the final round of a presidential vote, and thus forging the powerful red- brown coalition the democrats fear most. It may not come to that. But only saints and fools in Russia would now rule it out. `How are you greeting the New Year?' I asked a wise old democrat this week. `Anxiously,' he replied.