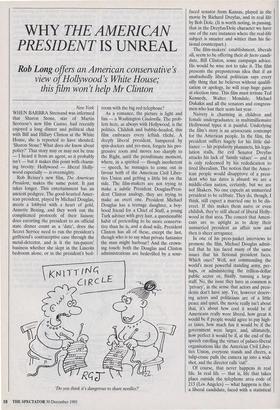 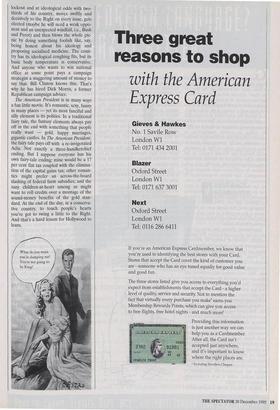 Page 18, 30 December 1995 — WHY THE AMERICAN PRESIDENT IS UNREAL Rob Long offers an
Close

WHY THE AMERICAN PRESIDENT IS UNREAL Rob Long offers an

New York WHEN BARBRA Streisand was informed that Sharon Stone, star of Martin Scorcese's new film Casino, had recently enjoyed a long dinner and political chat with Bill and Hillary Clinton at the White House, she is reported to have shouted, `Sharon Stone? What does she know about policy?' That story may or may not be true — I heard it from an agent, so it probably isn't — but it makes this point with charm- ing brevity: Hollywood — liberal Holly- wood especially — is overmighty.

Rob Reiner's new film, The American President, makes the same point. It just takes longer. This entertainment has an ancient pedigree. The good-hearted Amer- ican president, played by Michael Douglas, meets a lobbyist with a heart of gold, Annette Bening, and they work out the complicated protocols of their liaison: does escorting the president to an official state dinner count as a 'date', does the Secret Service need to run the president's girlfriend's contraceptive case through the metal-detector, and is it the tax-payers' business whether she slept in the Lincoln bedroom alone, or in the president's bed- room with the big red telephone?

As a romance, the picture is light and fun — a Washington Cinderella. The prob- lem here, as always with Hollywood, is the politics. Childish and bubble-headed, this film embraces every leftish cliché. A deeply liberal president, hampered by spin-doctors and yes-men, forgets his pro- gressive roots and moves too sharply to the Right, until the penultimate moment, where, in a spirited — though incoherent — speech, he manages to come out in favour both of the American Civil Liber- ties Union and getting a little bit on the side. The film-makers arc not trying to make a subtle President Douglas/Presi- dent Clinton analogy, they are trying to make an overt one. President Michael Douglas has a teenage daughter, a boy- hood friend for a Chief of Staff, a young Turk adviser with grey hair, a questionable habit of pretending to be more conserva- tive than he is, and a dead wife. President Clinton has all of these, except the last, though who is to say what private fantasies the man might harbour? And the crown- ing touch: both the Douglas and Clinton administrations are bedevilled by a sour- `Do you think it's dangerous to share needles?' faced senator from Kansas, played in the movie by Richard Dreyfus, and in real life by Bob Dole. (It is worth noting, in passing, that in the Dreyfus/Dole character we have one of the rare instances where the real-life subject is smarter and wittier than his fic- tional counterpart.) The film-makers' establishment, liberals all, seem to be offering their de facto candi- date, Bill Clinton, some campaign advice. He would be wise not to take it. The film presents the preposterous idea that if an unabashedly liberal politician says every silly thing that he believes without qualifi- cation or apology, he will reap huge gains at election time. This film must irritate Ted Kennedy, Walter Mondale, Michael Dukakis and all the senators and congress- men who lost their seats last year.

Naivety is charming in children and female undergraduates; in multimillionaire Hollywood types it is painful. Underlying the film's story is an aristocratic contempt for the American people. In the film, the president suffers hugely for his little dal- liance — his popularity plummets, his legis- lation stalls, the evil Senator Dreyfus attacks his lack of 'family values' — and it is only redeemed by his rededication to tired liberalism. The notion that the Amer- ican people would disapprove of a presi- dent who has dates is absurd: we are a middle-class nation, certainly, but we are not Shakers. No one expects an unmarried president to be celibate. They do, though, I think, still expect a married one to be dis- creet. If this makes them naive or even childish, they're still ahead of liberal Holly- wood in that area. The conceit that Ameri- cans are so uptight as to deny their unmarried president an affair now and then is sheer arrogance.

In one of his press-junket interviews to promote the film, Michael Douglas admit- ted that he has faced many of the same issues that his fictional president faces. Which ones? Well, not commanding the world's most powerful standing army, per- haps, or administering the trillion-dollar public sector or, finally, running a large staff. No, the issue they have in common is `privacy', in the sense that actors and presi- dents don't have any. Yet, however deserv- ing actors and politicians are of a little peace and quiet, the movie really isn't about that, it's about how cool it would be if Americans really were liberal, how great it would be if people would agree to pay high- er taxes, how much fun it would be if the government were larger, and, ultimately, how perfect it would be if, at the end of the speech extolling the virtues of palaeo-liberal organisations like the American Civil Liber- ties Union, everyone stands and cheers, a tulip-crane pulls the camera up into a wide shot, and the director calls `cut!'.

Of course, that never happens in real life. In real life — that is, life that takes place outside the telephone area code of 213 (Los Angeles) — what happens is this: a liberal candidate, faced with a statistical lockout and at ideological odds with two- thirds of his country, moves swiftly and decisively to the Right on every issue, gets elected (maybe he will need a weak oppo- nent and an unexpected windfall, i.e., Bush and Perot) and then blows the whole pic- nic by doing something foolish like, say, being honest about his ideology and proposing socialised medicine. The coun- try has its ideological coughing fits, but its basic body temperature is conservative. And anyone who wants to win national office at some point pays a campaign strategist a staggering amount of money to say that. Bill Clinton knows this. That's why he has hired Dick Morris, a former Republican campaign adviser.

The American President is in many ways a fun little movie. It's romantic, sexy, funny in many places — yet its most fanciful and silly element is its politics. In a traditional fairy tale, the fantasy elements always pay off in the end with something that people really want — gold, happy marriages, gigantic castles. In The American President, the fairy tale pays off with a re-invigorated Aclu. Not exactly a three-handkerchief ending. But I suppose everyone has his own fairy-tale ending: mine would be a 17 per cent flat tax coupled with the elimina- tion of the capital gains tax; other roman- tics might prefer an across-the-board slashing of federal farm subsidies; and the zany children-at-heart among us might want to roll credits over a montage of the sound-money benefits of the gold stan- dard. At the end of the day, in a conserva- tive country, to touch people's hearts you've got to swing a little to the Right. And that's a hard lesson for Hollywood to learn.