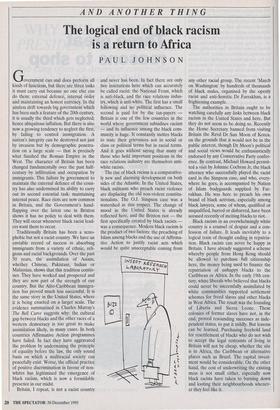 The logical end of black racism is a return to Africa

Government can and does perform all kinds of functions, but there are three tasks it must carry out because no one else can do them: external defence, internal order and maintaining an honest currency. In the aimless drift towards big government which has been such a feature of the 20th century, it is usually the third which gets neglected; hence ubiquitous inflation. But there is also now a growing tendency to neglect the first, by failing to control immigration. A nation's integrity can be destroyed not just by invasion but by demographic penetra- tion on a large scale — that is precisely what finished the Roman Empire in the West. The character of Britain has been changed fundamentally over the past half- century by infiltration and occupation by immigrants. This failure by government to maintain the external defence of the coun- try has also undermined its ability to carry out its second essential task: maintaining internal peace. Race riots are now common in Britain, and the Government's hand- flapping over the latest one in Brixton shows it has no policy to deal with them. They will occur whenever black racist lead- ers want them to occur.

Traditionally Britain has been a xeno- phobic but not a racist country. We have an enviable record of success in absorbing immigrants from a variety of ethnic, reli- gious and racial backgrounds. Over the past 50 years, the assimilation of Asians, whether Chinese, Pakistani, Indian or Malaysian, shows that this tradition contin- ues. They have worked and prospered and they are now part of the strength of our country. But the Afro-Caribbean immigra- tion has proved much less successful. It is the same story in the United States, where it is being enacted on a larger scale. The evidence summarised in Charles Murray's The Bell Curve suggests why: the cultural gap between blacks and the other races of a western democracy is too great to make assimilation likely, in many cases. In both countries Affirmative Action programmes have failed. In fact they have aggravated the problem by undermining the principle of equality before the law, the only sound basis on which a multiracial society can peacefully exist. Worse, the official practice of positive discrimination in favour of non- whites has legitimised the emergence of black racism, which is now a formidable presence in our midst.

Britain, I repeat, is not a racist country and never has been. In fact there are only two institutions here which can accurately be called racist: the National Front, which is anti-black, and the race relations indus- try, which is anti-white. The first has a small following and no political influence. The second is paid for by the tax-payers Britain is one of the few countries in the world where government subsidises racism — and its influence among the black com- munity is huge. It constantly incites blacks to state their grievances not in social or class or political terms but in racial terms. And it goes without saying that many of those who hold important positions in the race relations industry are themselves anti- white racists.

The rise of black racism is a comparative- ly new and alarming development on both sides of the Atlantic. In the United States, black militants who preach racist violence are displacing the old non-violent constitu- tionalists. The O.J. Simpson case was a watershed in this respect. The change of mood in the United States is already reflected here, and the Brixton riot — the first specifically created by black racists was a consequence. Modern black racism is the product of two factors: the preaching of Islam among blacks and the use of Affirma- tive Action to justify racist acts which would be quite unacceptable coming from any other racial group. The recent 'March on Washington' by hundreds of thousands of black males, organised by the openly racist and anti-Semitic Dr Farrakhan, is a frightening example.

The authorities in Britain ought to be watching carefully any links between black racism in the United States and here. But they do not seem to be doing so. Recently the Home Secretary banned from visiting Britain the Revd Dr Sun Moon of Korea, on the grounds that it would not be in the public interest, though Dr Moon's political and social views would be enthusiastically endorsed by any Conservative Party confer- ence. By contrast, Michael Howard permit- ted a visit by Johnnie Cochran Jr, the black attorney who successfully played the racist card in the Simpson case, and who, every- where he goes, is accompanied by Nation of Islam bodyguards supplied by Far- rakhan. He was here to preach his own brand of black activism, especially among black lawyers, some of whom, qualified or unqualified, barred or disbarred, have been accused recently of inciting blacks to riot.

Black racism in an overwhelmingly white country is a counsel of despair and a con- fession of failure. It leads inevitably to a logical train of thought ending in repatria- tion. Black racists can never be happy in Britain. I have already suggested a scheme whereby people from Hong Kong should be allowed to purchase full citizenship here, the money being used to finance the repatriation of unhappy blacks to the Caribbean or Africa. In the early 19th cen- tury, white liberals who believed that blacks could never be successfully assimilated by white communities supported settlement schemes for freed slaves and other blacks in West Africa. The result was the founding of Liberia and Sierra Leone. These colonies of former slaves have not, in the end, proved resounding successes as inde- pendent states, to put it mildly. But lessons can be learned. Purchasing freehold land for resettlement of blacks who do not wish to accept the legal restraints of living in Britain will not be cheap, whether the site is in Africa, the Caribbean or alternative places such as Brazil. The capital invest- ment would be considerable. On the other hand, the cost of underwriting the existing mess is not small either, especially now black racists have taken to burning down and looting their neighbourhoods whenev- er they feel like it.