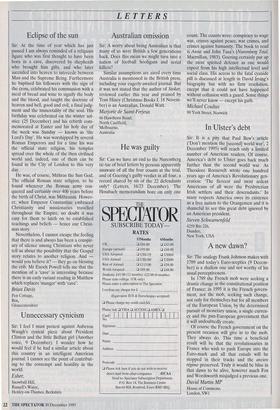 Sir: Can we have an end to the Nuremberg tic-tac of brief letters by persons apparently unaware of all the four counts at the trial, and of Goering's guilty verdict in all four, a record shared by six of the 22 defendants only? (Letters, 16/23 December). The Hossbach memorandum bore on only one count. The counts were: conspiracy to wage war, crimes against peace, war crimes, and crimes against humanity. The book to read is Anne and John Tusa's (Nuremberg Trial, Macmillan, 1983). Goering certainly put up the most spirited defence as one would expect from his high intellectual level and social class. His access to the fatal cyanide pill is discussed at length in David Irving's biography but with no firm resolution, except that it could not have happened without collusion with a guard. Some things we'll never know — except his guilt.