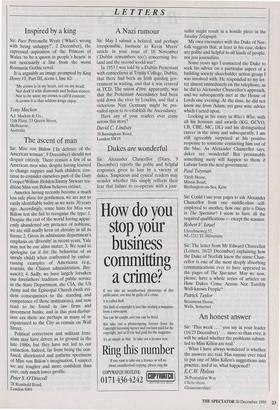 Sir: May I submit a belated, and perhaps irresponsible, footnote to Kevin Myers' article in your issue of 18 November (Dublin remembers too') concerning Ire- land and the second world war?

In 1953 I was told by a Dublin Protestant with connections at Trinity College, Dublin, that there had been an Irish quisling gov- ernment in waiting, and that it was centred in TCD. The raison d'être, apparently, was that the Protestant Ascendancy had been sold down the river by London, and that a victorious Nazi Germany might be pre- vailed upon to re-establish the Ascendancy.

Have any of your readers ever come across this story?