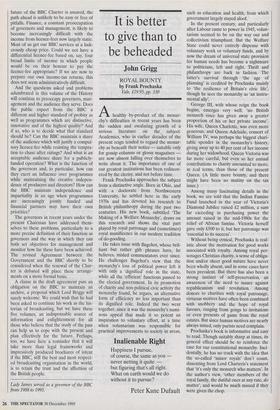 It is better to give than to be beheaded

ROYAL BOUNTY by Frank Prochaska Yale, £19.95, pp. 330 Ahealthy by-product of the monar- chy's difficulties in recent years has been the sudden and escalating growth of a serious literature on the, subject. Academics, who in earlier decades of the present reign tended to regard the monar- chy as beneath their notice — suitable only for gossip columns or glossy magazines are now almost falling over themselves to write about it. The importance of one of our greatest institutions has been rediscov- ered by the clerisy, and not before time.

Frank Prochaska approaches the subject from a distinctive angle. Born in Ohio, and with a doctorate from Northwestern University, he settled here in the early 1970s and has devoted his research to British philanthropy during the past two centuries. His new book, subtitled 'The Making of a Welfare Monarchy', draws on this research and shows the vital part played by royal patronage and (sometimes) royal munificence in our modern tradition of do-gooding.

He takes issue with Bagehot, whose bril- liant but rather glib phrases have, he believes, misled commentators ever since. He challenges Bagehot's view that the monarchy's loss of political power left it with only a 'dignified' role in the state, while all the 'efficient' functions passed to the elected government. In its promotion of charity and non-political civic activity the monarchy found, he argues, an alternative form of efficiency no less important than its dignified role. Indeed the two went together, since it was the monarchy's numi- nous appeal that made it so potent an inspiration to voluntary effort, at a time when voluntarism was responsible for practical improvements to society in areas, such as education and health, from which government largely stayed aloof.

In the present century, and particularly after Labour came to power in 1945, volun- tarism seemed to be on the way out and collectivism triumphant. But the Welfare State could never entirely dispense with voluntary work or voluntary funds, and by now the dream of universal state provision for human needs has become a nightmare to politicians, left and right. Thrift and philanthropy are back in fashion. The latter's survival through 'the age of planning' is credited by Prochaska mainly to 'the resilience of Britain's civic life', though he sees the monarchy as 'an instru- mental ally'.

George III, with whose reign the book begins, emerges very well; 'no British monarch since has given away a greater proportion of his or her private income'. His wife, Queen Charlotte, was even more generous, and Queen Adelaide, consort of William IV, was perhaps the biggest chari- table spender in the monarchy's history, giving away up to 40 per cent of her income during her widowhood. Queen Victoria was far more careful, but even so her annual contributions to charity amounted to more, in real terms, than those of the present Queen. (A little more bounty, and there might have been no mutiny on the tax issue.) Among many fascinating details in the book, we are told that the Indian Famine Fund launched in the year of Victoria's Diamond Jubilee raised £2 million, a sum far exceeding in purchasing power the amount raised in the mid-1980s for the relief of African famine. Victoria herself gave only £500 to it, but her patronage was `essential to its success'.

Without being cynical, Prochaska is real- istic about the motivation for good works associated with royalty. Among royal per- sonages Christian charity, a sense of obliga- tion and/or sheer good nature have never been wholly absent, and in some cases have been prevalent. But there has also been a strong instinct of self-preservation, an awareness of the need to insure against republicanism and revolution. Among donors to charities with royal patronage, virtuous motives have often been combined with snobbery and the hope of royal favours, ranging from gongs to invitations or even presents of game from the royal estates. But since human motives are nearly always mixed, only purists need complain.

Prochaska's book is informative and easy to read. Though suitably sharp at times, its general effect should be to reinforce the case for our constitutional monarchy. Inci- dentally, he has no truck with the idea that the so-called 'minor royals' don't count, dissenting from Lord Charteris's statement that 'it's only the monarch who matters'. In the author's view, 'other members of the royal family, the dutiful ones at any rate, do matter', and would be much missed if they were given the chop.