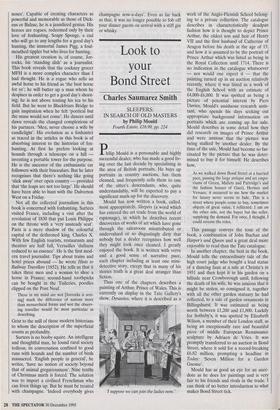 Look to your Bond Street

SLEEPERS: IN SEARCH OF OLD MASTERS by Philip Mould Fourth Estate, £16.99, pp. 224 hilip Mould is a personable and highly successful dealer, who has made a good liv- ing over the last decade by specialising in the area of British portraits. He buys up portraits in country auctions, has them cleaned, and frequently sells them to one of the sitter's descendants, who, quite understandably, will be expected to pay a significant mark-up for the discovery.

Mould has now written a book, called, most appropriately, Sleepers (a word which has entered the art trade from the world of espionage), in which he describes recent discoveries of works of art which have gone through the salesroom misattributed or undervalued or so disgustingly dirty that nobody but a dealer recognises how well they might look once cleaned. I greatly enjoyed the book. It is written with verve and a good sense of narrative pace, each chapter including at least one mini- detective story, except that in many of his stories truth is a great deal stranger than fiction.

Thus one of the chapters describes a painting of Arthur, Prince of Wales. This is currently on display in the Tate Gallery's show, Dynasties, where it is described as a `I suppose we can join the ladies now.' work of the Anglo-Flemish School belong- ing to a private collection. The catalogue describes in characteristically deadpan fashion how it is thought to depict Prince Arthur, the oldest son and heir of Henry VII and the first husband of Catherine of Aragon before his death at the age of 15; and how it is assumed to be the portrait of Prince Arthur which was listed as being in the Royal Collection until 1714. There is no indication in the catalogue whatsoever — nor would one expect it — that the painting turned up in an auction relatively recently, where it was listed as a work of the English School with an estimate of £4,000-£6,000. It was spotted as being a picture of potential interest by Piers Davies, Mould's assiduous research assis- tant, who spends his days seeking out appropriate background information on portraits which are coming up for sale. Mould describes in some detail how they did research on images of Prince Arthur and were anxious that the picture was being stalked by another dealer. By the time of the sale, Mould had become so fas- cinated by the picture that he was deter- mined to buy it for himself. He describes how,

As we walked down Bond Street at a hurried pace, passing the large antique and art empo- riums of Green, Mallets and Partridge's and the fashion houses of Gucci, Hermes and Versace, it occurred to me how the market for luxury never seems to fade. This is a street where people come to buy, sometimes objects of great value, I reflected. I am on the other side, not the buyer but the seller, supplying the demand. For once, I thought, I could reverse the roles.

This passage conveys the tone of the book, a combination of John Buchan and Harper's and Queen and a great deal more enjoyable to read than the Tate catalogue.

In another chapter, the best in the book, Mould tells the extraordinary tale of the high court judge who bought a lead statue of a dancing faun at a sale at Christie's in 1951 and then kept it in his garden on a hillside near Crowborough until, following the death of his wife, he was anxious that it might be stolen, so consigned it, together with all the other garden statuary he had collected, to a sale of garden ornaments in Billingshurst. It was estimated as being worth between £1,200 and £1,800. Luckily for Sotheby's, it was spotted by Elizabeth Wilson, a member of their London staff, as being an exceptionally rare and beautiful piece of middle European Renaissance sculpture by Adriaen de Vries. It was promptly transferred to an auction in Bond Street, where it sold for a record-breaking £6.82 million, prompting a headline in Today: 'Seven Million for a Garden Gnome'.

Mould has as good an eye for an anec- dote as he does for paintings and is very fair to his friends and rivals in the trade. can think of no better introduction to what makes Bond Street tick.