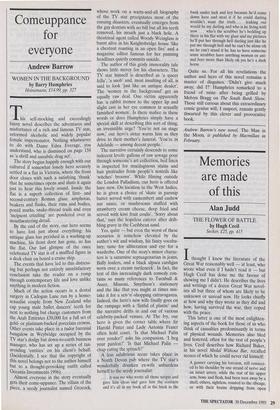 WOMEN IN THE BACKGROUND by Barry Humphries Heinemann, £14.99, pp. 327 his self-mocking and exceedingly funny novel describes the adventures and misfortunes of a rich and famous TV star, reformed alcoholic and widely popular female impersonator. Nothing whatsoever to do with Dame Edna Everage, you understand, who is dismissed on page 158 as 'a shrill and unsubtle drag act'.

The story begins happily enough with our cultured if somewhat lonely hero securely settled in a flat in Victoria, where the front door closes with such a satisfying `thunk' that he sometimes opens and shuts it again just to hear this lovely sound. Inside the flat is a superb collection of first- and second-century Roman glass: amphoras, beakers and flasks, their rims and bodies, pontil marks, snake-thread trails and even `incipient crizzling' are pondered over in mouthwatering detail.

By the end of the story, our hero seems to have lost just about everything: his antique glass has perished in a washing-up machine, his front door has gone, so has the flat. Our last glimpse of the once celebrated TV star is of a muffled figure in a deck chair on board a cruise ship.

The events that have led to this distress- ing but perhaps not entirely unsatisfactory conclusion take the reader on a romp through contemporary life and love unlike anything in modern fiction. Much of the action occurs in a dental surgery in Cadogan Lane run by a homo- sexualist couple from New Zealand who cap young male ballet dancers' teeth for next to nothing but charge customers from the Arab Emirates £30,000 for a full set of gold- or platinum-backed porcelain crowns. Other events take place in a tudor baronial bungalow in Weybridge occupied by the TV star's dodgy but down-to-earth business manager, who has set up a series of tax- avoiding 'entities' on his client's behalf. (Incidentally, I see that the copyright of this novel belongs not to the author himself but to a thought-provoking outfit called Oceania Investments 1996).

Almost everyone in the story eventually gets their come-uppance. The villain of the piece, a seedy journalist named Greecelc, whose work on a warts-and-all biography of the TV star precipitates most of the ensuing disasters, eventually emerges from the gay dentists with no bill but all his teeth removed, his mouth just a black hole. A theatrical agent called Woody Weinglass is burnt alive in his Knightsbridge house 'like a chestnut roasting in an open fire' and a magazine editor famous for her punning headlines quietly commits suicide.

The author of this grisly immorality tale shows little mercy for his characters. The TV star himself is described as 'a queer fella', 'a snob' and, most insulting of all, is said to look 'just like an antique dealer'. The 'women in the background' get an equally raw deal. One victim apparently has 'a rabbit tremor to the upper lip and slight cast in her eye common in sexually famished women'. Is there malice in these words or does Humphries simply have a special skill at describing this sort of thing, an irresistible urge? 'You're not on stage now,' our hero's sister warns him as they drive to their mother's funeral. 'You're in Adelaide — among decent people.'

The narrative certainly descends to some indecent levels: gallons of raw sewage pour through someone's art collection, bed linen is inspected for mucilaginous stains and hair protrudes from people's nostrils like `witches' brooms'. While filming outside the London Palladium, our hero is offered hare stew. On location in the West Indies, he is given a choice of 'skate in parsnip batter served with camembert and cashew nut sauce, or mushrooms stuffed with strawberry cream cheese, deep fried and served with kiwi fruit coulis'. 'Sorry about that,' says the hopeless caterer after drib- bling gravy in the Caribbean sand.

Yes, quite — but even the worst of these scenarios is somehow elevated by the author's wit and wisdom, his fancy vocabu- lary, taste for alliteration and eye for a wardrobe. One of the story's minor charac- ters is 'a saturnine septuagenarian in jeans, Bally loafers, and a black alpaca cardigan worn over a cream turtleneck'. In fact, the text of this increasingly dark comedy con- tains so many references to Turnbull & Asser, Missoni, Smythson's stationery and the like that you might at times mis- take it for a sex-'n'-shopping extravaganza. Indeed, the hero's new wife finally goes on the rampage with a 'fistful of plastic' and the narrative drifts in and out of various celebrity-packed venues. At The Ivy, our hero is given the corner table where Sir Harold Pinter and Lady Antonia Fraser often hold court. 'Is that Michael Palin over yonder?' asks his companion. 'I beg your pardon?—Is that Michael Palin chap eating the spinach?' A less salubrious scene takes place in a North Devon pub where the TV star's wonderfully drunken ex-wife unburdens herself to the seedy journalist: . it was me who wrote all those scripts and gave him ideas and gave him the contacts and it's all in my book all in the book in the bank under lock and key because he'd come down here and steal it if he could darling wouldn't want the truth. .. leaking out would he my darling and who is he living with now ... who's the scrubber he's bedding up there in his flat with my glass and my pictures he'll put her through hell darling just like he put me through hell and he can't be alone oh no he can't stand it he has to have someone some scrubber have anything woman or ani- mal boys more than likely oh yes he's a dark horse Quite so. For all his revelations the author and hero of this novel remains a master of disguises. 'Didn't give much away, did I?' Humphries remarked to a friend of mine after being grilled by Melvyn Bragg on The South Bank Show. Those still curious about this extraordinary comic genius will, 1 suspect, remain gently thwarted by this clever and provocative book.

Andrew Barrow's new novel, The Man in the Moon, is published by Macmillan in February.