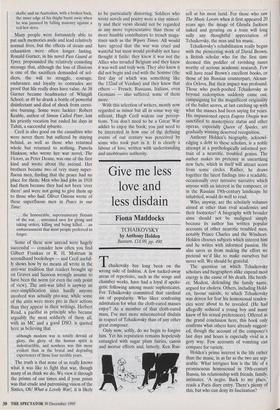 Give me less love and less disdain

TCHAIKOVSKY by Anthony Holden Bantam, £18.99, pp. 490 Tchaikovsky has long been on the wrong side of fashion. A few tucked-away areas of repertoire, such as the songs and chamber works, have had a loyal if apolo- getic following among music sophisticates. For Tchaikovsky committed that cardinal sin of popularity. Who likes confessing admiration for what the cloth-eared masses enjoy? As a member of that cloth-eared mass, I've met more misconceived disdain in respect of Tchaikovsky than of any other great composer.

Only now, softly, do we begin to forgive him. Yet his reputation remains hopelessly entangled with sugar plum fairies, canon and mortar effects and, latterly, Ken Rus- sell at his most lurid. For those who saw The Music Lovers when it first appeared 20 years ago, the image of Glenda Jackson naked and gyrating on a train will long sully any thoughtful appreciation of Tchaikovsky, the man and his music.

Tchaikovsky's rehabilitation really began with the pioneering work of David Brown, a British scholar who for the first time deemed this peddler of ravishing tunes worthy of serious academic research. Few will have read Brown's excellent books, or those of his Russian counterpart, Alexan- dra Orlova. But their impact was profound. Those who pooh-poohed Tchaikovsky as beyond redemption suddenly came out, campaigning for the magnificent originality of the ballet scores, at last catching up with what the masses had been saying for years. His impassioned opera Eugene Onegin was sanctified to masterpiece status and other operas, especially Queen of Spades, are gradually winning deserved recognition.

Anthony Holden's biography, acknowl- edging a debt to these scholars, is a noble attempt at a psychologically informed por- trait of a neurotic, troubled genius. The author makes no pretence at unearthing new facts, which in itself will attract scorn from some circles. Rather, he draws together the latest findings into a readable, occasionally over intrusive narrative which anyone with an interest in the composer, or in the Russian 19th-century landscape he inhabited, would do well to read.

Who, anyway, are the scholarly volumes aimed at other than rival academics and their footnotes? A biography with broader aims should not be maligned simply because its author has written popular accounts of other neurotic troubled men, notably Prince Charles and the Windsors. Holden chooses subjects which interest him and he writes with informed passion. He also saves us from making the effort we pretend we'd like to make ourselves but never will. We should be grateful.

The question on which Tchaikovsky scholars and biographers alike expend most energy is the cause of his death. His broth- er, Modest, defending the family name, argued for cholera. Others, including Hold- en, favour suicide, to which Tchaikovsky was driven for fear his homosexual tenden- cies were about to be revealed. (He had allegedly seduced a young boy and many knew of his sexual preferences). Offered as the grand conclusion here, this book only confirms what others have already suggest- ed, though the account of the composer's last days and hours is especially vivid in a gory way. Few accounts of vomiting can compare for variety.

Holden's prime interest is the life rather than the music, in as far as the two are sep- arable. What intrigues him is the life of a promiscuous homosexual in 19th-century Russia, his relationship with friends, family, intimates. 'A negro. Back to my place,' reads a Paris diary entry. There's plenty of this, but who can deny its fascination?