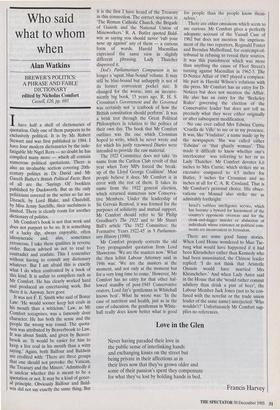 Who said what to whom when

BREWER'S POLITICS: A PHRASE AND FABLE DICTIONARY edited by Nicholas Comfort Cassell, £20, pp. 693 Ihave half a shelf of dictionaries of quotation. Only one of them purports to be exclusively political. It is by Mr Robert Stewart and was first published in 1984. I have four modern dictionaries by the inde- fatigable Mr Nigel Rees — no doubt he has compiled many more — which all contain numerous political quotations. There is also an invaluable section covering 20th- century politics in Dr David and Mr Gareth Butler's British Political Facts. Best of all are the 'Sayings OF booklets published by Duckworth. But as the only politicians covered in the series so far are Disraeli, by Lord Blake, and Churchill, by Miss Jenny Sutcliffe, their usefulness is limited. There is clearly room for another dictionary of politics. Mr Comfort's book is not that work and does not purport to be so. It is something of a lucky dip, always enjoyable, often idiosyncratic and, alas, sometimes erroneous. I take these qualities in reverse order. Bacon advised us not to read to contradict and confute. This I remember without having to consult any dictionary whatever. But I am afraid this is exactly what I do when confronted by a book of this kind. It is unfair to compilers such as Mr Comfort. He has clearly worked hard and produced an entertaining work. But there it is. Anyway, here goes: It was not F. E. Smith who said of Bonar Law: 'He would sooner keep hot coals in his mouth than a witticism.' Law, as Mr Comfort recognises, was a famously dour character. He has both the sense and the people the wrong way round. The quota- tion was attributed by Beaverbrook to Law. It was about Smith, and given by Beaver- brook as: 'It would be easier for him to keep a live coal in his mouth than a witty saying.' Again, both Balfour and Baldwin are credited with: 'There are three groups that one should not provoke: the Vatican, the Treasury and the Miners.' Admittedly it is unclear whether this is meant to be a quotation or not. It may be a kind of gener- al principle. Obviously Balfour and Bald- win did not say exactly the same thing. But it is the first I have heard of the Treasury in this connection. The correct sequence is: `The Roman Catholic Church, the Brigade of Guards and the National Union of Mineworkers.' R. A. Butler quoted Bald- win as saying you should never 'rub your nose up against' any of them — a curious form of words. Harold Macmillan expressed the same view in slightly different phrasing. Lady Thatcher disproved it.

Dod's Parliamentary Companion is no longer a 'squat, blue-bound' volume. It may still be blue-bound but unhappily is not of its former convenient pocket size. It changed for the worse, into an inconve- niently big book, 15 years ago. R. H. S. Crossman's Government and the Governed was certainly not 'a textbook of how the British constitution should perform'. It was a brisk trot through the Great Political Philosophers in relation to the politics of their own day. The book that Mr Comfort outlines was the one which Crossman hoped to write, which he never wrote and for which his justly renowned Diaries were intended to provide the raw material.

The 1922 Committee does not take 'its name from the Carlton Club revolt of that year when Tory MPs forced the break- up of the Lloyd George Coalition'. Most people believe it does. Mr Comfort is in error with the rest of them. It takes its name from the 1922 general election, which returned numerous new Conserva- tive Members. Under the leadership of Sir Gervais Rentoul, it was formed for the purposes of solidarity and mutual support. Mr Comfort should refer to Sir Philip Goodhart's The 1922 and to Mr Stuart Ball's article 'The 1922 Committee: the Formative Years 1922-45' in 9 Parliamen- tary History (1990).

Mr Comfort properly corrects the old Tory propagandist quotation from Lord Shawcross: 'We are the masters now.' What the then leftist Labour Attorney said in 1946 was: 'We are the masters at the moment, and not only at the moment but for a very long time to come.' However, Mr Comfort has no entry for that other hal- lowed standby of post-1945 Conservative orators, Lord Jay's 'gentleman in Whitehall knows best'. What he wrote was: 'In the case of nutrition and health, just as in the case of education, the gentleman in White- hall really does know better what is good for people than the people know them- selves.'

There are other omissions which seem to me curious. Mr Comfort gives a perfectly adequate account of the Vassal] Case of 1962 but does not mention the imprison- ment of the two reporters, Reginald Foster and Brendan Mulholland, for contempt-of- tribunal in refusing to reveal their sources. It was this punishment which was more than anything the cause of Fleet Street's turning against Macmillan in 1962-3. The D-Notice Affair of 1967 played a compara- ble part in Harold Wilson's relations with the press. Mr Comfort has an entry for D- Notices but does not mention the Affair. He also has an entry for the 'Berkeley Rules' governing the election of the Conservative leader but does not tell us precisely what they were either originally or after subsequent modification.

No one ever called Mrs Edwina Currie `Cniella de Ville' to me or in my presence. It was, like `Vindaloo', a name made up by the newspapers. She was called either `Edwina' or 'that ghastly woman'. This made it difficult to know whether one's interlocutor was referring to her or to Lady Thatcher. Mr Comfort devotes 6.6 inches to Mrs Currie, which strikes me as excessive compared to 4.5 inches for Butler, 3 inches for Crossman and no inches at all for C. A. R. Crosland. That is Mr Comfort's personal choice. His obser- vations on Mossad also strike me as admirably forthright:

Israel's ruthless intelligence service, which has become a byword for harassment of the country's opponents overseas and for the cloak-and-dagger murder or abduction of individuals whose existence or political com- ments are inconvenient to Jerusalem.

There are some good funny stories. When Lord Home wondered to Mao Tse- tung what would have happened if it had been Khrushchev rather than Kennedy who had been assassinated, the Chinese leader replied: 'I do not think that Aristotle Onassis would have married Mrs Khruschchev.' And when Lady Astor said in the House that she 'would rather commit adultery than drink a pint of beer', the Labour Member Jack Jones (not to be con- fused with the novelist or the trade union leader of the same name) interjected: 'Who wouldn't?' Unfortunately Mr Comfort sup- plies no references.