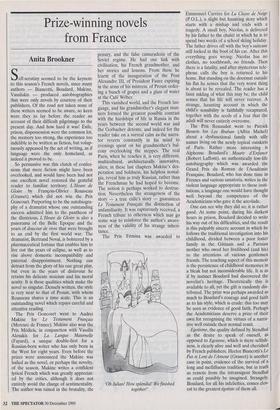 Self scrutinyseemed to be the keynote to this season's French novels, since many authors — Biancotti, Boudard, Makine, Vassilakis — produced autobiographies that were only novels by courtesy of their publishers. Of the road not taken none of these writers seemed to be aware, so keen were they to lay before the reader an account of their difficult pilgrimage to the present day. And how hard it was! Exile, prison, dispossession were the common lot, the memory too strong, the experience too indelible to be written as fiction, but volup- tuously appeased by the act of writing, as if language were the only homeland, as indeed it proved to be.

So persuasive was this clutch of confes- sions that mere fiction might have been overlooked, and would have been had not one excellent novel restored the grateful reader to familiar territory: L'Heure de Gloire by Francois-Olivier Rousseau (Grasset) which did not win the Prix Goncourt. Purporting to be the autobiogra- phy of a dramatist whose one outstanding success admitted him to the pantheon of the illustrious, L'Heure de Gloire is also a panorama of the Belle Epoque and the years of douceur de vivre that were brought to an end by the first world war. The dramatist, Bertrand Noval, is bolstered by a pharmaceutical fortune that enables him to live out the years of eclipse, as well as to rise above domestic incompatibility and paternal disappointment. Nothing can detract from the glory of his one great play, but even in the years of disfavour he retains his delicate stoicism and his moral acuity. It is these qualities which make the novel so singular. Densely written, the style is very near to that of Proust, with whom Rousseau shares a time scale. This is an outstanding novel which repays careful and attentive reading.

The Prix Goncourt went to Andrei Makine for Le Testament Francais (Mercure de France). Makine also won the Prix Medicis, in conjunction with Vassilis Alexakis for La Langue Matemelle (Fayard), a unique double-first for a Russian-born writer who has only been in the West for eight years. Even before the prizes were announced the Makine was hailed as the novel, or perhaps the novelty, of the season. Makin writes a confident lyrical French which was greatly appreciat- ed by the critics, although it does not entirely avoid the charge of sentimentality. The author was raised in the brutality, the penury, and the false camaraderie of the Soviet regime. He had one link with civilisation, his French grandmother, and her stories and lessons. From these he learnt of the inauguration of the Pont Alexandre III, of President Faure expiring in the arms of his mistress, of Proust order- ing a bunch of grapes and a glass of water at the Café Weber.

This vanished world, and the French lan- guage, and his grandmother's elegant man- ners formed the greatest possible contrast with the hardships of life in Russia in the years between the second world war and the Gorbachev detente, and indeed for the reader take on a surreal calm the narra- tor reverts constantly in his mind to evenings spent on his grandmother's bal- cony overlooking the steppes. The real Paris, when he reaches it, is very different, multicultural, architecturally innovative, alien; in these last chapters Makine's des- peration and boldness, his helpless nostal- gia, reveal him as truly Russian, rather than the Frenchman he had hoped to become. The notion is perhaps worked to destruc- tion. Nevertheless the strangeness of the story — a true exile's story — guarantees Le Testament Francais the distinction of unfamiliarity. It was rapturously received, a French tribute to otherness which may go some way to reinforce the author's aware- ness of the validity of his strange inheri- tance.

The Prix Femina was awarded to `Oh Julian! How splendid! We finished together!' Emmanuel Carrere for La Classe de Neige (P.O.L.), a slight but haunting story which starts with a mishap and ends with a tragedy. A small boy, Nicolas, is delivered by his father to the chalet in which he is to spend two weeks of a school skiing holiday. The father drives off with the boy's suitcase still locked in the boot of his car. After this everything goes wrong: Nicolas has no clothes, no toothbrush, no friends. Then there is a fatality, and after mysterious tele- phone calls the boy is returned to his home. But standing on the doormat outside his flat he senses that the very worst thing is about to be revealed. The reader has a faint inkling of what this may be; the child senses that his life will never recover. A strange, haunting account in which the child's sensibility is faithfully recaptured, together with the seeds of a fear that the adult will never entirely overcome.

The Prix Renaudot went to Patrick Besson for Les Braban (Albin Michel) about a dysfunctional family with silly names living on the newly topical outskirts of Paris. Rather more interesting is Alphonse Boudard's Mourir d'Enfance (Robert Laffont), an authentically low-life autobiography which was awarded the Grand Prix du Roman de l'Academie Francaise. Boudard, who has done time in Fresnes and various sanatoria, writes in the violent language appropriate to these insti- tutions, a language one would have thought well beyond the competence of the Academicians who gave it the accolade.

One can see why they did so; it is rather good. At some point, during his darkest hours in prison, Boudard decided to write his way out of his difficulties, and the result is this palpably sincere account in which he follows the traditional investigation into his childhood, divided between a poor foster family in the Gatinais and a Parisian mother who owed her livelihood (and his) to the attentions of various gentlemen friends. The touching aspect of this memoir is the persistence of childhood memories in a bleak but not inconsiderable life. It is as if by instinct Boudard had discovered the novelist's heritage. Theoretically this is available to all, yet the gift is randomly dis- tributed. The prize was perhaps awarded as much to Boudard's courage and good faith as to his style, which is crude: this too may be seen as evidence of good faith. Perhaps the Academicians deserve a prize of their own for recognising the virtues of a narra- tive well outside their normal remit.

Egotisme, the quality defined by Stendhal as the desire to speak of oneself, as opposed to Egoisme, which is mere selfish- ness, is clearly alive and well and cherished by French publishers. Hector Biancotti's Le Pas si Lent de l'Amour (Grasset) is another case in point, evidence of the survival of a long and mellifluous tradition, but in truth as remote from the intransigent Stendhal as could possibly be imagined. Strangely, Boudard, for all his infelicities, comes clos- est to the greatest egotiste of them all.