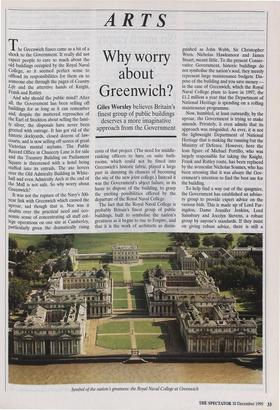 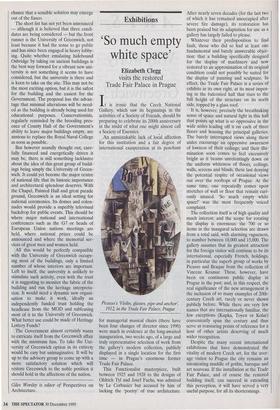 Why worry about Greenwich?

The Greenwich fiasco came as a bit of a shock to the Government. It really did not expect people to care so much about the old buildings occupied by the Royal Naval College, so it seemed perfect sense to offload its responsibilities for them on to someone else through the pages of Country Life and the attentive hands of Knight, Frank and Rutley.

And why should the public mind? After all, the Government has been selling off buildings for as long as it can remember and, despite the muttered reproaches of the Earl of Stockton about selling the fami- ly silver, the disposals have never been greeted with outrage. It has got rid of the historic dockyards, closed dozens of law- courts, and is now selling off scores of great Victorian mental asylums. The Public Record Office in Chancery Lane is for sale and the Treasury Building on Parliament Square is threatened with a hotel being stuffed into its entrails. The axe hovers over the Old Admiralty Building in White- hall and even Admiralty Arch at the end of the Mall is not safe. So why worry about Greenwich?

It was not the rupture of the Navy's 300- year link with Greenwich which caused the uproar, sad though that is. Nor was it doubts over the practical need and eco- nomic sense of concentrating all staff col- lege operations on one site at Camberley, particularly given the dramatically rising costs of that project. (The need for middle- ranking officers to have en suite bath- rooms, which could not be fitted into Greenwich's historic fabric, played a large part in damning its chances of becoming the site of the new joint college.) Instead it was the Government's abject failure, in its haste to dispose of the building, to grasp the exciting possibilities offered by the departure of the Royal Naval College. The fact that the Royal Naval College is probably Britain's finest group of public buildings, built to symbolise the nation's greatness as it began to rise to Empire, and that it is the work of architects as distin- guished as John Webb, Sir Christopher Wren, Nicholas Hawksmoor and James Stuart, meant little. To the present Conser- vative Government, historic buildings do not symbolise the nation's soul, they merely represent large maintenance budgets. Dis- pose of the building and you save money in the case of Greenwich, which the Royal Naval College plans to leave in 1997, the £1.2 million a year that the Department of National Heritage is spending on a rolling maintenance programme.

Now, humbled, at least outwardly, by the uproar, the Government is trying to make amends. Privately, it even admits that its approach was misguided. As ever, it is not the lightweight Department of National Heritage that is making the running but the Ministry of Defence. However, here the lean figure of Michael Portillo, who was largely responsible for taking the Knight, Frank and Rutley route, has been replaced by the avuncular Nicholas Soames, who has been stressing that it was always the Gov- ernment's intention to find the best use for the building.

To help find a way out of the quagmire, the Government has established an adviso- ry group to provide expert advice on the various bids. This is made up of Lord Far- ingdon, Dame Jennifer Jenkins, Lord Sainsbury and Jocelyn Stevens, a robust group by anyone's standards. If they insist on giving robust advice, there is still a Symbol of the nation's greatness: the Royal Naval College at Greenwich

chance that a sensible solution may emerge out of the fiasco.

The short list has not yet been announced — although it is believed that three candi- dates are being considered — but the front runner is the University of Greenwich, not least because it had the sense to go public and has since been engaged in heavy lobby- ing. Quite whether emulating hidebound Oxbridge by taking on ancient buildings is the best way forward for a vibrant new uni- versity is not something it seems to have considered, but the university is there and is keen to take on the site. This may not be the most exciting option, but it is the safest for the building and the easiest for the Government. The proposal has the advan- tage that minimal alterations will be need- ed as the building is already being used for educational purposes. Conservationists, regularly reminded by the brooding pres- ence of County Hall of the Government's ability to leave major buildings empty, are anxious to replace the Royal Naval College as soon as possible.

But however soundly thought out, care- fully financed and energetically driven it may be, there is still something lacklustre about the idea of this great group of build- ings being simply the University of Green- wich. It could yet become the major centre of national life that its historic importance and architectural splendour deserves. With the Chapel, Painted Hall and great parade ground, Greenwich is an ideal setting for national ceremonies. Its domes and colon- nades would provide a superbly televisual backdrop for public events. This should be where major national and international conferences such as the G7 or heads of European Union nations meetings are held, where national prizes could be announced and where the memorial ser- vices of great men and women held.

• All this would be perfectly compatible with the University of Greenwich occupy- ing most of the buildings, only a limited number of whose interiors are important. Left to itself, the university is unlikely to stimulate such activity, even with the trust it is suggesting to monitor the fabric of the building and run the heritage interpreta- tion. It would need a dynamic new organi- sation to make it work, ideally an independently funded trust holding the headlease from the MOD and subleasing most of it to the University of Greenwich. What better use could be made of Heritage Lottery Funds?

The Government almost certainly wants to extricate itself from the Greenwich affair with the minimum fuss. To take the Uni- versity of Greenwich option in its entirety would be easy but unimaginative. It will be up to the advisory group to come up with a more satisfactory solution which will restore Greenwich to the noble position it should hold in the affections of the nation.

Giles Worsley is editor of Perspectives on Architecture.