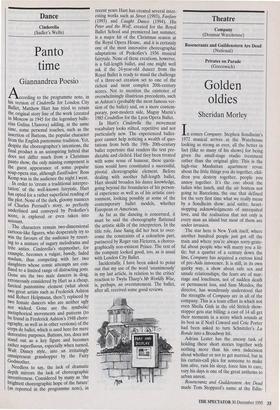 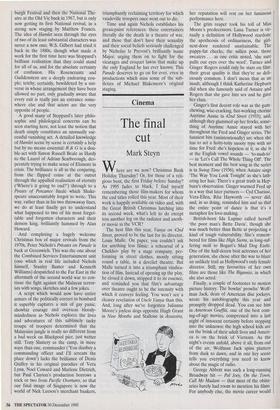 In comes Company: Stephen Sondheim's 1972 musical arrives at the Warehouse looking as strong as ever, all the better in fact (like so many of his shows) for being given the small-stage studio treatment rather than the original glitz. This is the high-rise Manhattan apartment revue about the little things you do together, chil- dren you destroy together, people you annoy together. It's the one about the ladies who lunch, and the air hostess not going to Barcelona, the one that defined for the very first time what we really mean by a Sondheim show: acid satire, heart- stopping acknowledgments of unrequited love, and the realisation that not only is every man an island but most of them are under invasion.

The star here is New York itself, where another hundred people just got off the train and where you're always sorry-grate- ful about people who will marry you a lit- tle; but a quarter of a century down the line, Company has acquired a curious kind of pre-Aids innocence. It is still, in its own quirky way, a show about safe sex and unsafe relationships; the fears are of mar- riage and loneliness, not of sudden death or permanent loss, and Sam Mendes, the director, has wondrously understood that the strengths of Company are in all of the company. This is a team effort in which not even Sheila Gish in the old Stritch show- stopper gets star billing: a cast of 14 all get their moments in a score which sounds at its best as if Noel Coward and Cole Porter had been asked to turn Schnitzler's La Ronde into a Broadway hit.

Adrian Lester has the uneasy task of holding these short stories together with nothing more than his own indecision about whether or not to get married, but in his curtain-call plea for someone to make him alive, ruin his sleep, force him to care, vary his days is one of the great anthems to urban unrest.

Rosencrantz and Guildenstem Are Dead made Tom Stoppard's name at the Edin- burgh Festival and then the National The- atre at the Old Vic back in 1967, but is only now getting its first National revival, in a strong new staging by Matthew Francis. The idea of Hamlet seen through the eyes of two of its least substantial characters was never a new one; W.S. Gilbert had tried it back in the 1880s, though what made it work for the first time here was Stoppard's brilliant realisation that they could stand for all of us, and for the absolute certainty of confusion. His Rosencrantz and Guildenstern are a deeply endearing cou- ple; tetchy, certainly, bewildered by a uni- verse in whose arrangement they have been allowed no part, only gradually aware that every exit is really just an entrance some- where else and that actors are the very opposite of people.

A good many of Stoppard's later philo- sophic and philological concerns can be seen starting here, not least the notion that death simply constitutes an unusually suc- cessful vanishing act. A detailed knowledge of Hamlet scene by scene is certainly a help but by no means essential: R & G is a dou- ble-act with Simon Russell Beale as Hardy to the Laurel of Adrian Scarborough, des- perately trying to make sense of Elsinore in crisis. The brilliance is all in the conjuring, from the flipped coins at the outset through the appalled realisation of eternity ('Where's it going to end?') through to a Pirates of Penzance finale which Shake- speare unaccountably forgot to write. This way, rather than in his two throwaway lines, we do at least finally get to understand what happened to two of his most forget- table and forgotten characters and their demon king, brilliantly hammed by Alan Howard.

And completing a hugely welcome Christmas box of major revivals from the 1970s, Peter Nichols's Privates on Parade is back at Greenwich. This was the one about the Combined Services Entertainment unit (one which in real life included Nichols himself, Stanley Baxter and Kenneth Williams) despatched to the Far East in the aftermath of the second world war to con- tinue the fight against the Malayan terror- ists with songs, sketches and a few jokes.

A script which would now have entire armies of the politically correct to bombard it superbly captures a mix of gay panic, showbiz courage and overseas bloody- mindedness as Nichols explores the lives and adventures of this sublimely tacky troupe of troopers determined that the Malaysian jungle is really no different from a bad week on Blackpool pier, just wetter still. Tony Slattery as the camp, in more ways than one, commander (`You disobey a commanding officer and I'll scream the place down') lacks the brilliance of Denis Quilley in his original parodies of Vera Lynn, Noel Coward and Marlene Dietrich, but Paul Clayton's production borrows a trick or two from Pacific Overtures, so that our final image of Singapore is now the world of Nick Leeson's merchant bankers, triumphantly reclaiming territory for which vaudeville troopers once went out to die.

Time and again Nichols establishes his greasepaint references: these entertainers literally die the death in a theatre of war, and those that don't have their sexuality and their social beliefs seriously challenged by Nicholas le Prevost's brilliantly inane Major, urging them on to fight for the vicarages and croquet lawns that make up the only England he has ever known. This Parade deserves to go on for ever, even in productions which miss some of the sub- tleties of Michael Blakemore's original staging.