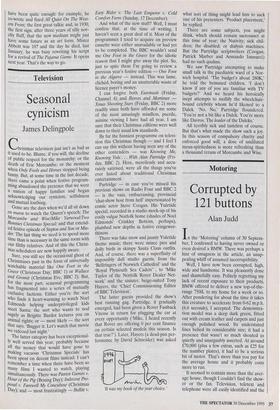 Christmas television just isn't as bad as it used to be. Blame, if you will, the decline of public respect for the monarchy; or the death of Eric Morcambe; or the moment when Only Fools and Horses stopped being funny. But, at some time in the last decade, there came a point when festive program- ming abandoned the pretence that we were a nation of happy families and began acknowledging our cynicism, selfishness and mutual loathing. Gone are the days when we'd all sit down en masse to watch the Queen's speech; The Morcambe and WiselMike YarwoodlTwo Ronnies Christmas Special; and that extend- ed festive episode of Steptoe and Son or Min- der. The last thing we need is to spend more time than is necessary in the same room with our filthy relatives. And of this the Christ- mas schedulers are now happily aware. Sure, you still see the occasional ghost of Christmases past in the form of universally watchable material like One Foot in the Grave (Christmas Day, BBC 1) or Wallace and Gromit (Christmas Eve, BBC 2). But, for the most part, seasonal programming has fragmented into a series of mutually exclusive factions. Either you're the sort who finds it heart-warming to watch Noel Edmonds helping underprivileged kids meet Santa; the sort who wants to nod sagely as Brigitte Bardot lectures you on animal rights; or — most likely — the sort that says. 'Bugger it. Let's watch that movie we videoed last night.' The latter category has been exceptional- ly well served this year, probably because all the money that would have gone to making vacuous 'Christmas Specials' has been spent on decent films instead. I can't remember a time when there have been so many films I wanted to watch, playing simultaneously. There was Patriot Games v. Hour of the Pig (Boxing Day); Indecent Pro- posal v. Farewell My Concubine (Christmas Day); and — most frustratingly — Bullitt v. Easy Rider v. The Last Emperor v. Cold Comfort Farm (Sunday, 17 December).

And what of the new stuff? Well, I must confess that, at the time of writing, I haven't seen a great deal of it. Most of the programmes I tried to acquire on preview cassette were either unavailable or had yet to be completed. The BBC wouldn't send me One Foot in the Grave for the idiotic reason that I might give away the plot. So, just to spite them I'm going to review a previous year's festive edition — One Foot in the Algarve — instead. This was lame, cliched, boring and an unutterable waste of licence payer's money.

I can forgive both Eurotrash (Friday, Channel 4) and Reeves and Mortimer Xmas Shooting Stars (Friday, BBC 2) more readily since both have afforded me some of the most amusingly mindless, puerile, asinine viewing I have had all year. I am sure that their Christmas editions were well down to their usual low standards.

By far the funniest programme on televi- sion this Christmas though — and I feel I can say this without having seen any of the other contenders — was Knowing Me, Knowing Yule . . . With Alan Partridge (Fri- day, BBC 2). Here, mercilessly and accu- rately satirised, were all the things you've ever hated about traditional Christmas entertainment.

There was fake snow and jaunty Yuletide theme music; there were mince pies and dolly birds in skimpy Santa Claus outfits. And, of course, there was a superfluity of impossibly dull studio guests, from the 'Bellringers of Norwich Cathedral' and the 'Royal Plymouth Sea Cadets' , to 'Mike Taylor of the Norfolk Rover Dealer Net- work' and the sinister, beige-suited Tony Hayers, the 'Chief Commissioning Editor of BBC Television'.

The latter guests provided the show's best running gag. Partridge, it gradually emerged, had been given a Rover Fastback Vitesse in return for plugging the car at every opportunity ('Mike, I heard recently that Rover are offering 0 per cent finance on certain selected models this season. Is that true?'). Later, Hayers (a dead-pan per- formance by David Schneider) was asked 'It was my book of the year choice.' what sort of thing might lead him to sack one of his presenters. 'Product placement,' he replied.

There are some subjects, you might think, which should remain sacrosanct at this time of year; the Nativity; sick chil- dren; the disabled; or dialysis machines. But the Partridge scriptwriters (Coogan, Patrick Marber and Armando Iannucci) had no such qualms.

We saw Partridge attempting to make small talk in the paediatric ward of a Nor- wich hospital. 'The budget's about 280K,' he told the bemused children. 'I don't know if any of you are familiar with TV budgets?' And we heard his heroically inept attempts to mollify the wheelchair- bound celebrity whom he'd likened to a Dalek. 'No. No,' Partridge floundered. 'You're not a bit like a Dalek. You're more like Davros. The leader of the Daleks.'

All terribly sick and tasteless of course. But that's what made the show such a joy. In this season of compulsory charity and enforced good will, a dose of undiluted mean-spiritedness is more refreshing than a thousand reruns of Morcambe and Wise.