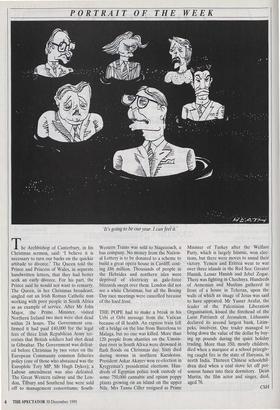 Its going to be our year. I can feel it.'

The Archbishop of Canterbury, in his Christmas sermon, said: 'I believe it is necessary to turn our backs on the quickie attitude to divorce.' The Queen told the Prince and Princess of Wales, in separate handwritten letters, that they had better seek an early divorce. For his part, the Prince said he would not want to remarry. The Queen, in her Christmas broadcast, singled out an Irish Roman Catholic nun working with poor people in South Africa as an example of service. After Mr John Major, the Prime Minister, visited Northern Ireland two men were shot dead within 24 hours. The Government con- firmed it had paid £40,000 for the legal fees of three Irish Republican Army ter- rorists that British soldiers had shot dead in Gibraltar. The Government was defeat- ed before Christmas by two votes on the European Community common fisheries policy (one of those who abstained was the Europhile Tory MP, Mr Hugh Dykes); a Labour amendment was also defeated. The Great Western railway and the Lon- don, Tilbury and Southend line were sold off to management consortiums; South- Western Trains was sold to Stagecoach, a bus company. No money from the Nation- al Lottery is to be donated to a scheme to build a great opera house in Cardiff, cost- ing £86 million. Thousands of people in the Hebrides and northern isles were deprived of electricity as gale-force blizzards swept over them. London did not see a white Christmas, but all the Boxing Day race meetings were cancelled because of the hard frost.

THE POPE had to make a break in his Urbi et Orbi message from the Vatican because of ill health. An express train fell off a bridge on the line from Barcelona to Malaga, but no one was killed. More than 120 people from shanties on the Umsin- dusi river in South Africa were drowned in flash floods on Christmas day. Sixty died during storms in northern Kazakstan. President Askar Akayev won re-election in Kyrgyzstan's presidential elections. Hun- dreds of Egyptian police took custody of some 750,000 cannabis and opium poppy plants growing on an island on the upper Nile. Mrs Tansu Ciller resigned as Prime Minister of Turkey after the Welfare Party, which is largely Islamic, won elec- tions, but there were moves to annul their victory. Yemen and Eritrea went to war over three islands in the Red Sea: Greater Hanish, Lesser Hanish and Jebel Zogar. There was fighting in Chechnya. Hundreds of Armenian and Muslims gathered in front of a house in Teheran, upon the walls of which an image of Jesus was said to have appeared. Mr Yasser Arafat, the leader of the Palestinian Liberation Organisation, kissed the forehead of the Latin Patriarch of Jerusalem. Lithuania declared its second largest bank, Litim- peks, insolvent. One trader managed to bring down the value of the dollar by buy- ing up pounds during the quiet holiday trading. More than 350, mostly children, died when a marquee at a school prizegiv- ing caught fire in the state of Haryana, in north India. Thirteen Chinese schoolchil- dren died when a coal stove let off poi- sonous fumes into their dormitory. Dean Martin, the film actor and singer, died, aged 78. CSH