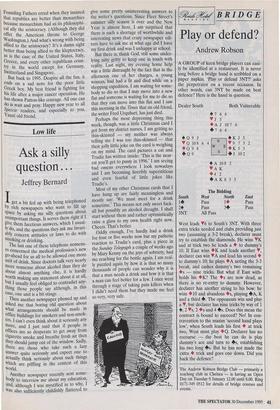 A GROUP of keen bridge players can easi- ly be identified at a restaurant. It is never long before a bridge hand is scribbled on a paper napkin. 'Play or defend 3NT?' asks the perpetrator on a recent occasion. In other words, can 3NT be made on best defence? Here is the hand in question.

Dealer South Both Vulnerable West leads V6 to South's 3NT. With three extra tricks needed and clubs providing just two (assuming a 3-2 break), declarer must try to establish the diamonds. He wins "K and at trick two he leads a • to dummy's 10. If East wins •K and leads another V, declarer can win VA and lead his second • to dummy's 10; he plays •A noting the 3-3 break, and cashes dummy's two remaining • s — nine tricks. But what if East with- holds his •K? The *s are now dead, as there is no re-entry to dummy. However, declarer has another string to his bow: he wins *10 and abandons •s, playing +A, K and a third 4. The opponents win and play a V, but declarer has nine tricks by way of 1 4, 2 Vs, 2 •s and 4 4s. Does this mean the contract is bound to succeed? No! In con- travention to the maxim 'second hand plays low', when South leads his first • at trick two, West must play *Q. Declarer has no recourse — the best he can do is play dummy's ace and turn to 4s, establishing his two long 4s. But he has not made the extra • trick and goes one down. Did you back the defence?