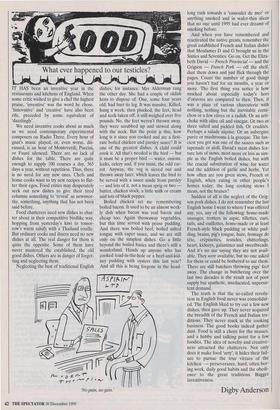 f almill , What ever happened to our testicles?

IT HAS been an inventive year in the restaurants and kitchens of England. When some critic wished to give a chef the highest praise, 'inventive' was the word he chose. `Innovative' and 'creative' have also been rife, preceded by some equivalent of `dazzlingly'.

We need inventive cooks about as much as we need contemporary experimental composers on Radio Three. Every hour of gnat's music played, or, even worse, dis- cussed, is an hour of Monteverdi, Puccini, or Faure silenced. There are no lack of dishes for the table. There are quite enough to supply 100 courses a day, 365 days a year, without repetition. Thus, there is no need for any new ones. Chefs and home cooks want to try new recipes to flat- ter their egos. Food critics may desperately seek out new dishes to give their tired columns something to 'reveal' as newswor- thy, something, anything that has not been said before.

Food chatterers need new dishes to chat- ter about in their competitive birdlike way, hopping from yesterday's kiwi to tomor- row's warm salsify with a Thailand rouille. But ordinary cooks and diners need no new dishes at all. The real danger for them is quite the opposite. Some of them have never mastered the established, the old good dishes. Others are in danger of forget- ting and neglecting them.

Neglecting the best of traditional English dishes, for instance. Mrs Alderman rang the other day. She had a couple of oldish hens to dispose of. One, some four years old, had hurt its leg. It was massive. Killed, hung a week, then plucked, the feet, head and neck taken off, it still weighed over five pounds. No, the feet weren't thrown away, they were scrubbed up and stewed along with the neck. But the point is this, how long is it since you cooked and ate a first- rate boiled chicken and parsley sauce? It is one of the greatest dishes. A child could cook it. All that's needed is the bird — but it must be a proper bird — water, onions, leeks, celery and, if you insist, the odd car- rot. Anyway, the veg is sieved out and thrown away later, which leaves the bird to be served with a sauce made from parsley — and lots of it, not a mean sprig or two butter, chicken stock, a little milk or cream and lots of black pepper.

Boiled chicken set me remembering boiled bacon. It used to be an almost week- ly dish when bacon was real bacon and cheap too. Again throwaway vegetables, but this time served with pease pudding. And there was boiled beef, boiled salted tongue with caper sauce, and we are still only on the simplest dishes. Go a little beyond the boiled basics and there's still a wonderland. Hands up anyone who has cooked toad-in-the-hole or a beef-and-kid- ney pudding with oysters this last year? And all this is being forgone in the head- long rush towards a `cassoulet de me? or anything smoked and in wafer-thin slices that no one until 1995 had ever dreamt of smoking before.

And when you have remembered and reactivated the native greats, remember the great established French and Italian dishes that Mesdames D and G brought us in the Sixties and Seventies. Go on. Get the Eliza- beth David — French Provincial — and the Grigson — French Pork — off the shelf, dust them down and just flick through the pages. Count the number of good things you haven't had for six months, a year or more. The first thing you notice is how mucked about especially today's hors d'oeuvres are compared to then. Then, it was a plate of various charcuterie with nothing, nothing but the inevitable corni- chon or a few olives or a radish. Or an arti- choke with olive oil and vinegar. Or two or three salted and pickled fish. Or crudités. Perhaps a salade nigoise. Or an aubergine purée or mushrooms a la grecque. The fan- ciest you got was one of the sauces such as tapenade or aioli. David's meat dishes fea- ture lots of stews, most more or less as sim- ple as the English boiled dishes, but with the crucial substitution of wine for water and the addition of garlic and herbs. Yet how often are you given stews, French or English, when eating in other people's homes today; the long cooking stews I mean, not the braises?

Saddest of all is the neglect of the Grig- son pork dishes. I do not remember the last English home I went to where I was offered any, yes, any of the following: home-made sausages, trotters in aspic, rillettes, ears, tails, and ouillettes, home-made or at least French-style black pudding or white pud- ding, brains, pig's tongue, hure, fromage de tete, crepinettes, testicles, chitterlings, heart, kidneys, galantines and sweetbreads. And it's no use saying they are not avail- able. They were available, but no one asked for them or could be bothered to use them. There are still butchers throwing pigs' feet away. The change in butchering over the last two decades is the result not of poor supply but apathetic, uneducated, unpersis- tent demand.

The truth is that the so-called revolu- tion in English food never was consolidat- ed. The English liked to try out a few new dishes, then gave up. They never acquired the breadth of the French and Italian tra- ditions. They never stuck at the cooking business. The good books indeed gather dust. Food is still a chore for the masses, and a hobby and talking point for a few foodies. The idea of novelty and creative- ness attracted the chatterers. Not only does it make food 'arty', it hides their fail- ure to pursue the true virtues of the kitchen — perseverance, hard, often bor- ing work, daily good habits and the obedi- ence to the great traditions. Bugger inventiveness.