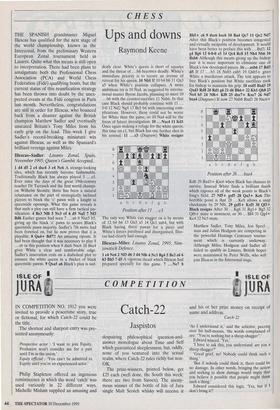 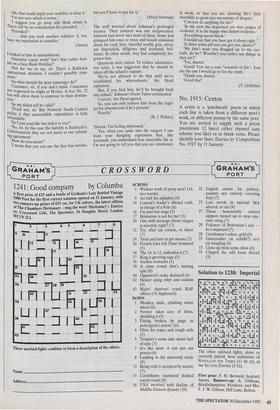 IN COMPETITION NO. 1912 you were invited to provide a peacetime story, true or fictional, for which Catch-22 could be the title.

The shortest and sharpest entry was pre- sented anonymously:

Prospective actor : 'I want to join Equity. Producers won't consider me for a part until I'm in the union.'

Equity official : 'You can't be admitted to Equity until you're an experienced actor.'

Philip Stapleton offered an ingenious reminiscence in which the word 'catch' was used variously in 22 different ways, Michelle Mislum supplied an amusing and despairing philosophical question-and- answer monologue about Time and Self which guaranteed sleeplessness, but, oddly, none of you ventured into the sexual realm, where Catch-22 rules richly but non- OK.

The prize-winners, printed below, get £25 each (well done, the South this week: there are two from Sussex). The anony- mous winner of the bottle of Isle of Jura single Malt Scotch whisky will receive it and his or her prize money on receipt of name and address.

Catch-22 'As I understand it,' said the solicitor, peering over his half-moons, 'the words complained of are: "You're nothing but a sheep-shagger".' Edward winced. 'Yes.'

'I have to ask this, you understand: are you a sheep-shagger?'

'Good grief, no! Nobody could think such a thing.'

`But if nobody could think it, there could be no damage. In other words, bringing the action and seeking to show damage would imply that you believe it possible that people might think such a thing.'

Edward considered this logic. 'Yes, but if I don't bring it?' :Ah, that could imply your inability to deny it.' not sure which I suggest you go away and think about it. ich is worse.'

There will be no consultation fee provided ...' `Provided?' . that you seek another solicitor. I, too, have my reputation to consider.'

I looked at him in astonishment.

`Essential repair work? Isn't that rather fool- ish on a busy Bank Holiday?'

'Not for me to say, sir. That's a Railtrack operational decision. I couldn't possibly com- ment.' 'So what should the poor passenger do?'

'Customer, if you don't mind. Customers are requested to alight at Horley. A free No. 22 ustomer, sir,

bus will allow them to continue to their destina- tion.' `So myticket will be valid?' "Fraid not, sir. But Network South Central Policy is that unavoidable expenditure is fully refundable.' `So I just send the bus ticket to you?'

No, sir. In this case the liability is Railtrack's. Unfortunately they are not party to our refund- ing agreement.' `How do you mean?' `I mean that you can use the free bus service, (Anon)

but you'll have to pay for it,'

(Peter Norman) The staff worried about Johnson's prolonged rn truancy. Their concern was not reciprocated. Johnson had never met most of them. Some had glimpsed him once or twice and would reminisce about his curly hair, cheerful toothy grin, pleas- ant disposition, diligence and academic bril- liance. In other words, they had completely for- gotten him. Questions were raised. To reduce administra- tive costs, it was suggested that he should be school's r taken off the register.

'We're not allowed to do that until we've established his whereabouts,' the Head explained.

'But, if you find him, he'll be brought back into school,' Johnson's Form Tutor commented. 'Correct,' the Head agreed. `So, you can only remove him from the regis- ter for absenteeism if he's present.'

`Yes, when you came into the surge saw from your hangdog expression that, like Jeremiah, you understand how miserable life is. I'm not going to tell you that you are emotional- (R. J. Pickles) ly weak, or that you are allowing life's little molehills to grow into mountains of despair.' `Can you do anything for me?' `In my view the depressed are wise judges of evidence. It is the happy who distort evidence.' `Everything seems bleak.' `I would say that you have got it about right.' 'Is there some pill you can give me, doctor?' e don't want you drugged up to the eye- balls, do we? Wouldn't you rather see things as they are?' `Yes, doctor.' `Good! You are a true "scientist of life". You are the one I would go to for the truth.'

A cento is a 'patchwork' poem in which each line is taken from a different poet's work, or different poems by the same poet. You are invited to supply such a poem (maximum 12 lines) either rhymed (any scheme you like) or in blank verse. Please identify your lines. Entries to 'Competition No. 1915' by 11 January.