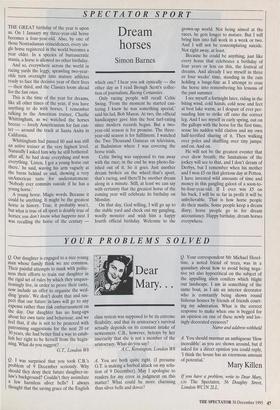 Q. Our daughter is engaged to a nice young man whose family think we are common. Their painful attempts to mask with polite- ness their efforts to train our daughter in the rigid set of rules by which they unques- tioningly live, in order to prove their caste, now include an offer to organise the wed- ding 'gratis'. We don't doubt that and sus- pect that our future in-laws will go to any expense rather than risk embarrassment on the day. Our daughter has no hang-ups about her own taste and behaviour, and we feel that, if she is not to be pestered with patronising suggestions for the next 20 or 30 years, she had better find a way to estab- lish her right to be herself from the begin- ning. What do you suggest?

G.T., London W8 Q. I was surprised that you took C.B.'s problem of 9 December seriously. Why should they deny their future daughter-in- law's background? Couldn't they assimilate a few harmless silver bells? I always thought that the saving grace of the English class system was supposed to be its extreme flexibility, and that its aristocracy's survival actually depends on its constant intake of newcomers. C.B., however, betrays by her insecurity that she is not a member of the aristocracy. What do you say? A.C., Kensington, London W8 A. You are both quite right. (I presume G.T. is making a barbed attack on my solu- tion of 9 December). May I apologise to readers for my error in judgment on this matter? What could be more charming than silver bells and doves? Q. Your correspondent Mr Michael Hesel- tine, a noted friend of trees, was in a quandary about how to avoid being nega- tive yet also hypocritical on the subject of the appalling alien conifers which blight our landscape. I am in something of the same boat, as I am an interior decorator who is constantly being shown round hideous houses by friends of friends court- ing my admiration. What is the correct response to make when one is begged for an opinion on one of these newly and lov- ingly decorated eyesores?

Name and address withheld A. You should murmur an ambiguous 'How incredible' as you are shown around, but if asked for a direct opinion you could reply, `I think the house has an enormous amount If you have a problem, write to Dear Mary, clo The Spectator, 56 Doughty Street, London WC1N 2LL.