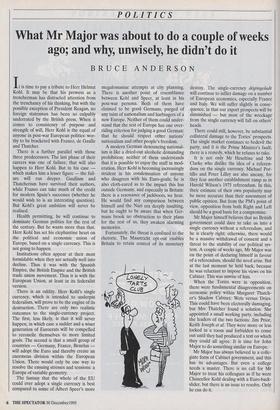 What Mr Major was about to do a couple of weeks ago; and why, unwisely, he didn't do it

It is time to pay a tribute to Herr Helmut Kohl. It may be that his prowess as a trencherman has distracted attention from the trenchancy of his thinking, but with the possible exception of President Reagan, no foreign statesman has been so culpably underrated by the British press. When it comes to consistency of purpose and strength of will, Herr Kohl is the equal of anyone in post-war European politics: wor- thy to be bracketed with Franco, de Gaulle and Thatcher.

There is a further parallel with those three predecessors. The last phase of their careers was one of failure; that will also happen to Herr Kohl. But in his case which makes him a lesser figure — the fail- ure will run deeper. Gaullism and Thatcherism have survived their authors, while Franco can take much of the credit for modem Spain's successes (whether he would wish to is an interesting question). But Kohl's great ambition will never be realised.

Health permitting, he will continue to dominate German politics for the rest of the century. But he wants more than that. Herr Kohl has set his elephantine heart on the political and economic union of Europe, based on a single currency. This is not going to happen.

Institutions often appear at their most formidable when they are actually well into decline. Thus it was with the Spanish Empire, the British Empire and the British trade union movement. Thus it is with the European Union, at least in its federalist version.

There is an oddity. Herr Kohl's single currency, which is intended to underpin federalism, will prove to be the engine of its destruction. There are only two realistic outcomes to the single-currency project. The first, less likely, is that it will never happen, in which case a sadder and a wiser generation of Eurocrats will be compelled to reconcile themselves to more limited goals. The second is that a small group of countries — Germany, France, Benelux will adopt the Euro and thereby create an enormous division within the European Union. There would only be one way to resolve the ensuing stresses and tensions: a Europe of variable geometry.

The fantasy that the whole of the EU could ever adopt a single currency is best compared to some of Albert Speer's more megalomaniac attempts at city planning. There is another point of resemblance between Kohl and Speer, at least in his post-war persona. Both of them have claimed to be good Germans, purged of any taint of nationalism and harbingers of a new Europe. Neither of them could under- stand that the rest of Europe has one over- riding criterion for judging a good German: that he should respect other nations' nationalism and other people's freedom.

A modern German denouncing national- ism is like a dried-out alcoholic demanding prohibition; neither of them understands that it is possible to enjoy the stuff in mod- eration. Herr Kohl is becoming increasingly strident in his condemnation of anyone who disagrees with his Euro-goals; he is also cloth-eared as to the impact this has outside Germany, and especially in Britain: there is a resonance of jackboots, we hear. He would find any comparison between himself and the Nazi era deeply insulting, but he ought to be aware that when Ger- mans brook no obstruction to their plans for the rest of us, they awaken alarming memories.

Fortunately, the threat is confined to the rhetoric. The Maastricht opt-out enables Britain to retain control of its monetary destiny. The single-currency degringolade will continue to inflict damage on a number of European economies, especially France and Italy. We will suffer slightly in conse- quence, in that our export prospects will be diminished — but most of the wreckage from the single currency will fall on others' heads.

There could still, however, be substantial collateral damage to the Tories' prospects. The single market continues to bedevil the party, and it is the Prime Minister's fault; there is a remedy, which he refuses to take.

It is not only Mr Heseltine and Mr Clarke who dislike the idea of a referen- dum on the single currency. Michael Por- tillo and Peter Lilley are also uneasy, for they fear another establishment ramp as in Harold Wilson's 1975 referendum. In this, their estimate of their own popularity may be more accurate than their assessment of public opinion. But from the PM's point of view, opposition from both Right and Left should be a good basis for a compromise.

Mr Major himself believes that no British government could dare to take us into a single currency without a referendum, and he is clearly right; otherwise, there would be a massive withdrawal of consent and a threat to the stability of our political sys- tem. A couple of weeks ago, Mr Major was on the point of declaring himself in favour of a referendum, should the need arise. But at the last moment he held back, because he was reluctant to impose his views on his Cabinet. This was unwise of him.

When the Tories were in opposition, there were fundamental disagreements on economic policy within Margaret Thatch- er's Shadow Cabinet: Wets versus Dries. This could have been electorally damaging, but Mrs Thatcher found a solution. She appointed a small working party, including the leaders of the two factions: Jim Prior, Keith Joseph et al. They were more or less locked in a room and forbidden to come out until they had produced a text on which they could all agree. It is time for John Major to do something similar on Europe.

Mr Major has always believed in a colle- giate form of Cabinet government, and this has its advantages. But even a college needs a master. There is no call for Mr Major to treat his colleagues as if he were Chancellor Kohl dealing with a Euro-back- slider, but there is an issue to resolve. Only he can do it.