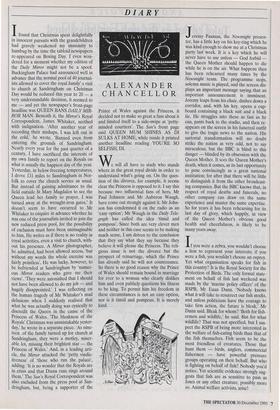 ALEXANDER CHANCELLOR Ifound that Christmas spent delightfully in innocent pursuits with the grandchildren had gravely weakened my immunity to humbug by the time the tabloid newspapers re-appeared on Boxing Day. I even won- dered for a moment whether my edition of the Daily Mirror might not be a spoof. Buckingham Palace had announced well in advance that the normal pool of 40 journal- ists allowed to cover the royal family' s visit to church at Sandringham on Christmas Day would be reduced this year to 20 — a very understandable decision, it seemed to me — and yet the newspaper's front-page headline was QUEEN BANS DAILY MIR- ROR MAN. Beneath it, the Mirror's Royal Correspondent, James Whitaker, seethed with indignation. 'After another year of recording their mishaps, I was left out in the cold,' he wrote. 'Banned even from entering the grounds of Sandringham. Nearly every year for the past quarter of a century, I have sacrificed the interests of my own family to report on the Royals on what is usually the happiest day of the year. Yesterday, in below-freezing temperatures, I drove 131 miles to Sandringham in Nor- folk to cover the church service as usual. But instead of gaining admittance to the field outside St Mary Magdalen to see the Queen lead her family to prayer, I was turned away at the wrought-iron gates.' It doesn't seem to have occurred to Mr Whitaker to enquire in advance whether he was one of the journalists invited to join the new reduced press pool, for the possibility of exclusion must have been unimaginable to him. He writes as if there is no reality in royal activities, even a visit to church, with- out his presence. A Mirror photographer, he admitted, had been allowed access, 'but without my words the whole exercise was fairly pointless'. He was lucky, however, to be befriended at Sandringham by 'numer- ous Mirror readers who gave me their views'. 'They were astonished that I should not have been allowed to do my job — and hugely disappointed.' I was reflecting on the human tragedy of Mr Whitaker's mad delusions when I suddenly realised that what he was actually doing was cynically to discredit the Queen in the cause of the Princess of Wales. 'The bleakness of the Royals' Christmas was unmistakable yester- day,' he wrote in a separate piece. 'As nine- teen of the family turned up for church at Sandringham, they were a motley, miser- able lot, missing their brightest star — the Princess of Wales.' And, in a leading arti- cle, the Mirror attacked the 'petty vindic- tiveness' of 'those who run the palace', adding: 'It is no wonder that the Royals are in crisis and that Diana runs rings around them.' The Sun's Royal Correspondent was also excluded from the press pool at San- dringham, but, being a supporter of the Prince of Wales against the Princess, it decided not to make so great a fuss about it and limited itself to a side-swipe at 'petty- minded courtiers'. The Sun's front page said QUEEN MUM SHINES AS DI SULKS AT HOME, while inside it printed another headline reading YOU'RE SO SELFISH, DI.

We will all have to study who stands where in the great royal divide in order to understand what's going on. On the ques- tion of the divorce, for example, it seems clear the Princess is opposed to it. I say this because two influential fans of hers, Mr Paul Johnson and Mr Auberon Waugh, have come out strongly against it. Mr John- son has condemned it on the radio as an `easy option'; Mr Waugh in the Daily Tele- graph has called the idea 'timid and pompous'. Since both are very clever men and neither in this case seems to be making much sense, I am driven to the conclusion that they say what they say because they believe it will please the Princess. The reli- gious issue is not the divorce but the prospect of remarriage, which the Prince has already said he will not countenance. So there is no good reason why the Prince of Wales should remain bound in marriage for ever to a woman who clearly dislikes him and even publicly questions his fitness to be king. To permit him his freedom in these circumstances is not an easy option, nor is it timid and pompous. It is merely kind. Jeremy Paxman, the Newsnight presen- ter, has a little key on his key-ring which he was kind enough to show me at a Christmas party last week. It is a key which he will never have to use unless — God forbid the Queen Mother should happen to die while he is on the air. What happens then has been rehearsed many times by the Newsnight team. The programme stops, solemn music is played, and the screen dis- plays an important message saying that an important announcement is imminent. Jeremy leaps from his chair, dashes down a corridor, and, with his key, opens a cup- board containing a black suit and a black tie. He struggles into these as fast as he can, pants back to the studio, and then re- appears on the screen in his funereal outfit to give the tragic news to the nation. His sartorial transformation will no doubt strike the nation as very odd, not to say miraculous, but the BBC is blind to this danger — blinded by its obsession with the Queen Mother. It sees the Queen Mother's death, when it comes, as its last opportunity to pose convincingly as a great national institution; for after that there will be little to distinguish it from the other broadcast- ing companies. But the BBC knows that, in respect of royal deaths and funerals, no other company can draw on the same experience and muster the same expertise. So for years it has been rehearsing for its last day of glory, which happily, in view of the Queen Mother's obvious good health and cheerfulness, is likely to be many years away.

If you were a zebra, you wouldn't choose a lion to represent your interests; if you were a fish, you wouldn't choose an osprey. Yet what organisation speaks for fish in this country? It is the Royal Society for the Protection of Birds. The only formal state- ment on behalf of fish last weekend was made by the 'marine policy officer' of the RSPB, Mr Euan Dunn. 'Nobody knows what it will take to resurrect our fish stocks, and unless politicians have the courage to take firm action, the future is bleak,' Mr Dunn said. Bleak for whom? 'Both for fish- ermen and wildlife,' he said. But for what wildlife? That was not specified, but I sus- pect the RSPB of being more interested in the welfare of fish-eating birds than that of the fish themselves. Fish seem to be the most friendless of creatures. Those that hunt them — birds, anglers, commercial fishermen — have powerful pressure groups operating on their behalf. But who is fighting on behalf of fish? Nobody you'd notice. Yet scientific evidence strongly sug- gests that fish are as sensitive to pain as foxes or any other creature, possibly more so. Animal welfare activists, arise!