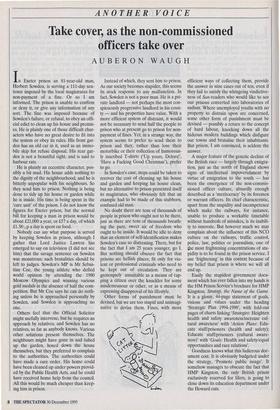 Take cover, as the non-commissioned officers take over

He is plainly an eccentric character, pos- sibly a bit mad. His house adds nothing to the dignity of the neighbourhood, and he is bitterly unpopular with his neighbours. So they send him to prison. Nothing is being done to tidy up his house or garden while he is inside. His time is being spent in the `care unit' of the prison. I do not know the figures for Exeter prison, but the normal bill for keeping a man in prison would be about £21,000 a year, or £57 a day, of which £1.381,2p a day is spent on food.

Nobody can say what purpose is served by keeping Sowden in prison, although I gather that Lord Justice Lawton has emerged to say on television (I did not see him) that the savage sentence on Sowden was monstrous; such brutalities should be left to judges. Sowden's MP is Mr Sebas- tian Coe, the young athlete who defied world opinion by attending the 1980 Moscow Olympics and winning various gold medals in the absence of half the com- petition. But Mr Coe says he can do noth- ing unless he is approached personally by Sowden, and Sowden is approaching no one.

Others feel that the Official Solicitor might usefully intervene, but he requires an approach by relatives, and Sowden has no relatives, so far as anybody knows. Various other solutions present themselves. The neighbours might have gone in and tidied up the garden, hosed down the house themselves, but they preferred to complain to the authorities. The authorities could have made a care order. His home could have been cleaned up under powers provid- ed by the Public Health Acts, and he could have received home help from the council. All this would be much cheaper than keep- ing him in prison. Instead of which, they sent him to prison. As our society becomes stupider, this seems its stock response to any malfunction. In fact, Sowden is not a poor man. He is a pri- vate landlord — not perhaps the most con- spicuously progressive landlord in his coun- ty — and his properties have value. With a more efficient system of distraint, it would not be necessary to send half the people to prison who at present go to prison for non- payment of fines. Yet, in a strange way, the system seems to prefer to send them to prison and they, rather than lose their motorbike or their collection of humorous- ly inscribed T-shirts Clip yours, Delors!', `Have a Fucking Good Christmas'), prefer to go.

In Sowden's case, steps could be taken to recover the cost of cleaning up his house and garden and keeping his house clean, but no alternative to prison presented itself to magistrates, who obviously felt that an example had to be made of this stubborn, confused old man.

No doubt there are tens of thousands of people in prison who ought not to be there, just as there are tens of thousands breath- ing the pure, sweet air of freedom who ought to be inside. It would be idle to deny that an element of self-identification makes Sowden's case so distressing. There, but for the fact that I am 25 years younger, go I. But nothing should obscure the fact that prisons are hellish places, fit only for vio- lent or professional criminals who need to be kept out of circulation. They are grotesquely unsuitable as a means of rap- ping a citizen over the knuckles for some misdemeanour or other, or as a means of expressing disapproval of his lifestyle.

Other forms of punishment must be devised, but we are too stupid and unimagi- native to devise them. Fines, with more efficient ways of collecting them, provide the answer in nine cases out of ten, even if they fail to satisfy the whingeing vindictive- ness of Sun-readers who would like to see our prisons converted into laboratories of sadism. Where unemployed youths with no property to distrain upon are concerned, some other form of punishment must be devised — possibly a return to the concept of hard labour, knocking down all the hideous modern buildings which disfigure our towns and brutalise their inhabitants. But prison, I am convinced, is seldom the answer.

A major feature of the genetic decline of the British race — largely through emigra- tion, just as the north of England shows signs of intellectual impoverishment by virtue of emigration to the south — has been the emergence of the non-commis- sioned officer culture, absurdly enough described as a 'meritocracy' by its foremen or warrant officers. Its chief characteristic, apart from the stupidity and incompetence which make the railways, for instance, unable to produce a workable timetable without hundreds of mistakes, is its inabili- ty to innovate. But however much we may complain about the influence of this NCO culture on the railways, traffic control, police, law, politics or journalism, one of the most frightening concentrations of stu- pidity is to be found in the prison service. I use 'frightening' in this context because of my belief that prison is where we will all end up.

Easily the stupidest government docu- ment which has ever fallen into my hands is the HM Prison Service's brochure for HMP Kingston, Strategy, the Name of the Game. It is a glossy, 44-page statement of goals, visions and values under the heading `Strategic Plan 1994-1998', with fold-out pages of charts linking 'Strategies: Heighten health and safety awareness/increase cul- tural awareness' with 'Action Plans: Edu- cate staff/prisoners (health and safety); Educate staff/prisoners (cultural aware- ness)' with 'Goals: Health and safety/equal opportunities and race relations'.

Goodness knows what this ludicrous doc- ument cost. It is obviously budgeted under the strategy, 'Promote public image'. It somehow manages to obscure the fact that HMP Kingston, the only British prison exclusively reserved for lifers, is going to close down its education department under the Howard cuts.